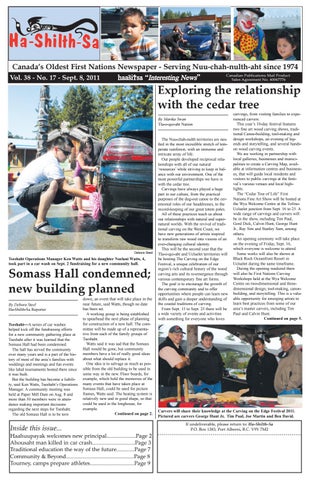 Somass Hall condemned; new building planned By Debora Steel Ha-Shilth-Sa Reporter Tseshaht—A series of car washes helped kick off the fundraising efforts for a new community gathering place at Tseshaht after it was learned that the Somass Hall had been condemned. The hall has served the community over many years and is a part of the history of most of the area’s families with weddings and meetings and fun events like lahal tournaments hosted there since it was built. But the building has become a liability, said Ken Watts, Tseshaht’s Operations Manager. A community meeting was held at Paper Mill Dam on Aug. 8 and more than 50 members were in attendance making important decisions regarding the next steps for Tseshaht. The old Somass Hall is to be torn

down; an event that will take place in the near future, said Watts, though no date has been set. A working group is being established to spearhead the next phase of planning for construction of a new hall. The committee will be made up of a representative from each of the family groups of Tseshaht. Watts said it was sad that the Somass Hall would be gone, but community members have a lot of really good ideas about what should replace it. One idea is to salvage as much as possible from the old building to be used in some way in the new. Floor boards, for example, which hold the memories of the many events that have taken place at Somass Hall, could be used for picture frames, Watts said. The heating system is relatively new and in good shape, so that could be used in the longhouse, for example. Continued on page 2.

The Nuu-chah-nulth territories are nestled in the most incredible stretch of temperate rainforest, with an immense and intricate array of life. Our people developed reciprocal relationships with all of our natural ‘resources’ while striving to keep in balance with our environment. One of the most powerful partnerships we have is with the cedar tree. Carvings have always played a huge part in our culture, from the practical purposes of the dug-out canoe to the ceremonial roles of our headdresses, to the record-keeping of our great totem poles. All of these practices teach us about our relationships with natural and supernatural worlds. With the revival of traditional carving on the West Coast, we have new generations of artists inspired to transform raw wood into visions of an ever-changing cultural identity. This will be the second year that the Tla-o-qui-aht and Ucluelet territories will be hosting The Carving on the Edge Festival, a unique celebration of our region’s rich cultural history of the wood carving arts and its re-emergence through various contemporary fine art forms. The goal is to encourage the growth of the carving community and to offer opportunities where people can learn new skills and gain a deeper understanding of the coastal traditions of carving. From Sept. 15 to Sept. 25 there will be a wide variety of events and activities with something for everyone who loves

carvings, from visiting families to experienced carvers. This year’s 10-day festival features two fine art wood carving shows, traditional Canoe-building, tool-making and design workshops, an evening of legends and storytelling, and several handson wood carving events. We are working in partnership with local galleries, businesses and municipalities to create a Carving Map, available at information centres and businesses, that will guide local residents and visitors to public carvings at the festival’s various venues and local highlights. The “Cedar Tree of Life” First Nations Fine Art Show will be hosted at the Wya Welcome Centre at the TofinoUcluelet junction from Sept. 16 to 25. A wide range of carvings and carvers will be in the show, including Tim Paul, Gord Dick, Calvin Hunt, George Hunt Jr., Ray Sim and Stanley Sam, among others. An opening ceremony will take place on the evening of Friday, Sept. 16, which everyone is welcome to attend. Some works will also be shown at Black Rock Oceanfront Resort in Ucluelet during the same timeframe. During the opening weekend there will also be First Nations Carving Workshops held at the Wya Welcome Centre on two-dimensional and threedimensional design, tool-making, canoebuilding, and storytelling. This is a valuable opportunity for emerging artists to learn best practices from some of our area’s master carvers, including Tim Paul and Calvin Hunt. Continued on page 5.