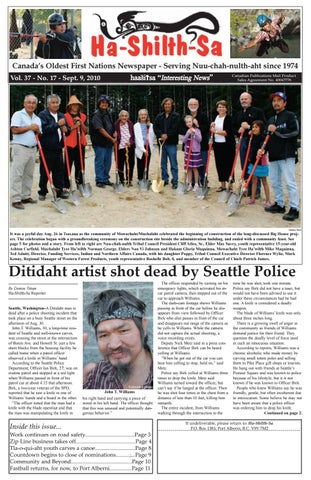 Ditidaht artist shot dead by Seattle Police By Denise Titian Ha-Shilth-Sa Reporter Seattle, Washington–A Ditidaht man is dead after a police shooting incident that took place on a busy Seattle street on the afternoon of Aug. 30. John T. Williams, 50, a long-time resident of Seattle and well-known carver, was crossing the street at the intersection of Boren Ave. and Howell St. just a few short blocks from the housing facility he called home when a patrol officer observed a knife in Williams’ hand. According to the Seattle Police Department, Officer Ian Birk, 27, was on routine patrol and stopped at a red light when Williams passed in front of his patrol car at about 4:15 that afternoon. Birk, a two-year veteran of the SPD, reported that he saw a knife in one of Williams’ hands and a board in the other. “The officer noted that the man had a knife with the blade open/out and that the man was manipulating the knife in

John T. Williams his right hand and carrying a piece of wood in his left hand. The officer thought that this was unusual and potentially dangerous behavior.”

The officer responded by turning on his emergency lights, which activated his incar patrol camera, then stepped out of the car to approach Williams. The dash-cam footage shows Williams passing in front of the car before he disappears from view followed by Officer Birk who also passes in front of the car and disappears out range of the camera as he yells to Williams. While the camera did not capture the actual shooting, a voice recording exists. Deputy Nick Metz said in a press conference that Officer Birk can be heard yelling at Williams. “When he got out of the car you can hear him yelling to stop, hold on,” said Metz. Police say Birk yelled at Williams three times to drop the knife. Metz said Williams turned toward the officer, but can’t say if he lunged at the officer. Then he was shot four times in the chest from a distance of less than 10 feet, killing him instantly. The entire incident, from Williams walking through the intersection to the

time he was shot, took one minute. Police say Birk did not have a taser, but would not have been advised to use it under these circumstances had he had one. A knife is considered a deadly weapon. The blade of Williams’ knife was only about three inches long. There is a growing swell of anger in the community as friends of Williams demand justice for their friend. They question the deadly level of force used in such an innocuous situation. According to reports, Williams was a chronic alcoholic who made money by carving small totem poles and selling them to Pike Place gift shops or tourists. He hung out with friends at Seattle’s Pioneer Square and was known to police because of his lifestyle; but it is not known if he was known to Officer Birk. People who knew Williams say he was friendly, gentle, but often incoherent due to intoxication. Some believe he may not have been aware that a police officer was ordering him to drop his knife. Continued on page 2.