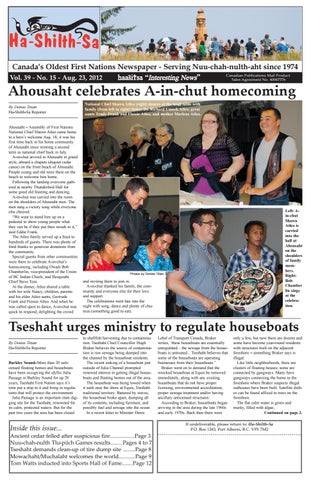 Ahousaht celebrates A-in-chut homecoming By Denise Titian Ha-Shilth-Sa Reporter Ahousaht – Assembly of First Nations National Chief Shawn Atleo came home to a hero’s welcome Aug. 18; it was his first time back in his home community of Ahousaht since winning a second term as national chief back in July. A-in-chut arrived in Ahousaht in grand style, aboard a chaputs (dugout cedar canoe) on the front beach of Ahousaht. People young and old were there on the beach to welcome him home. Following the landing everyone gathered at nearby Thunderbird Hall for some good old feasting and dancing. A-in-chut was carried into the room on the shoulders of Ahousaht men. The men sang a victory song while everyone else cheered. “We want to stand him up on a pedestal to show young people what they can be if they put their minds to it,” said Eddie Frank. The Atleo family served up a feast to hundreds of guests. There was plenty of food thanks to generous donations from the community. Special guests from other communities were there to celebrate A-in-chut’s homecoming, including Owadi Bob Chamberlin, vice-president of the Union of BC Indian Chiefs, and Hesquiaht Chief Steve Tom. At the dinner, Atleo shared a table with his wife Nancy, children, parents and his elder Atleo aunts, Gertrude Frank and Flossie Atleo. And when he was called upon to dance, A-in-chut was quick to respond, delighting the crowd

Left: Ain-chut Shawn Atleo is carried into the hall at Ahousaht on the shoulders of family members. Right: Bob Chamber lin sings at the celebration.

and inviting them to join in. A-in-chut thanked his family, the community and everyone else for their love and support. The celebrations went late into the night with song, dance and plenty of chumus (something good to eat).

Tseshaht urges ministry to regulate houseboats By Denise Titian Ha-Shilth-Sa Reporter Barkley Sound–More than 20 unlicensed floating homes and houseboats have been occupying the idyllic Julia Passage in Barkley Sound for up 20 years; Tseshaht First Nation says it’s time put a stop to it and bring in regulations that will protect the environment. Julia Passage is an important clam digging site for the Tseshaht, renowned for its calm, protected waters. But for the past two years the area has been closed

to shellfish harvesting due to contamination. Tseshaht Chief Councillor Hugh Braker believes the source of contamination is raw sewage being dumped into the channel by the houseboat residents. The recent sinking of a houseboat just outside of Julia Channel prompted renewed interest in getting illegal houseboats and floating homes out of the area. The houseboat was being towed when it sank near the shore at Equis, Tseshaht traditional territory. Battered by waves, the houseboat broke apart, dumping all of its contents, including furniture, and possibly fuel and sewage into the ocean. In a recent letter to Minister Denis

Lebel of Transport Canada, Braker writes, ‘these houseboats are essentially unregulated…the sewage from the houseboats is untreated…Tseshaht believes that some of the houseboats are operating businesses from their houseboats.” Braker went on to demand that the wrecked houseboat at Equis be removed immediately, along with any existing houseboats that do not have proper licensing, environmental accreditation, proper sewage treatment and/or having ancillary unlicensed structures. According to Braker, houseboats began arriving in the area during the late 1960s and early 1970s. Back then there were

only a few, but now there are dozens and some have become year-round residents with structures built on the adjacent foreshore – something Braker says is illegal. Like little neighborhoods, there are clusters of floating houses; some are connected by gangways. Many have gangways connecting the home to the foreshore where Braker suspects illegal outhouses have been built. Satellite dishes can be found affixed to trees on the foreshore. The flat calm water is green and murky, filled with algae; Continued on page 2.