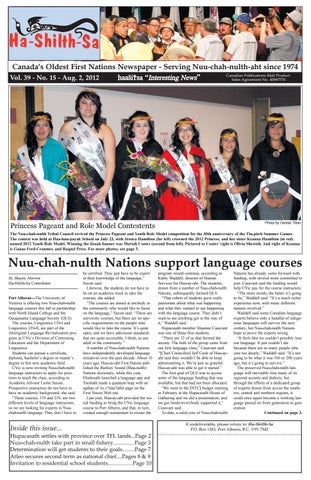 The Nuu-chah-nulth Tribal Council revived the Princess Pageant and Youth Role Model competition for the 30th anniversary of the Tlu-piich Summer Games. The contest was held at Haa-huu-payak School on July 23, with Jessica Hamilton (far left) crowned the 2012 Princess, and her sister Keanna Hamilton (in red) named 2012 Youth Role Model. Winning the Iisaak banner was Moriah Cootes (second from left). Pictured to Cootes’ right is Olivia Shewish. And right of Keanna is Ganao Fred-Cranmer, and Raquel Price. For more photos, see page 5.

Nuu-chah-nulth Nations support language courses By Shayne Morrow Ha-Shilth-Sa Contributor Port Alberni—The University of Victoria is offering two Nuu-chah-nulth language courses this fall in partnership with North Island College and the Quuquuatsa Language Society (QLS). The courses, Linguistics 159-I and Linguistics 259-II, are part of the Aboriginal Language Revitalization program at UVic’s Division of Continuing Education and the Department of Linguistics. Students can pursue a certificate, diploma, bachelor’s degree or master’s degree in this new academic field. UVic is now inviting Nuu-chah-nulth language instructors to apply for positions to teach the class, according to Academic Advisor Leslie Saxon. Prospective instructors do not have to have an academic background, she said. “These courses, 159 and 259, are two different levels of language instruction, so we are looking for experts in Nuuchah-nulth language. They don’t have to

be certified. They just have to be expert in their knowledge of the language,” Saxon said. Likewise, the students do not have to be on an academic track to take the courses, she added. “The courses are aimed at anybody in the community who would like to focus on the language,” Saxon said. “These are university courses, but there are no specific requirements on the people who would like to take the course. It’s quite open, and we have admission standards that are quite accessible, I think, to any adult in the community.” A number of Nuu-chah-nulth Nations have independently developed language initiatives over the past decade. About 10 years ago, Huu-ay-aht First Nation published the Barkley Sound (Maa-nulth) Nations dictionary, while this year, Ehattesaht launched a language app and Tseshaht made a quantum leap with an update of its c?išaa?athò page on the First Voices Web site. Last year, Huu-ay-aht provided the initial funding to bring the UVic language course to Port Alberni, and that, in turn, created enough momentum to ensure the

program would continue, according to Kathy Waddell, director of Human Services for Huu-ay-aht. The students, drawn from a number of Nuu-chah-nulth Nations, subsequently formed QLS. “That cohort of students grew really passionate about what was happening and what they wanted to see happening with the language course. They didn’t want to see anything get in the way of it,” Waddell said. Hupacasath member Shaunee Casavant was one of those first students. “There are 12 of us that formed the society. The bulk of the group came from our first language class,” Casavant said. “[Chief Councillor] Jeff Cook of Huu-ayaht said they wouldn’t be able to keep administering it. We’re just so grateful Huu-ay-aht was able to get it started.” The first goal of QLS was to access some of the language funding that was available, but that had not been allocated. “We went to the [NTC] budget meeting in February at the Hupacasath House of Gathering and we did a presentation, and we got funds–everybody supported it,” Casavant said. To date, a solid core of Nuu-chah-nulth

Nations has already come forward with funding, with several more committed to join. Casavant said the funding would help UVic pay for the course instructors. “The more minds, the better it’s going to be,” Waddell said. “It’s a much richer experience now, with many different nations involved.” Waddell said some Canadian language experts believe only a handful of indigenous languages will survive the next century, but Nuu-chah-nulth Nations hope to prove the experts wrong. “It feels like we couldn’t possibly lose our language. It just couldn’t die because there are so many people who care too deeply,” Waddell said. “It’s not going to be what it was 160 or 200 years ago, but it’s going to survive.” The preserved Nuu-chah-nulth language will inevitably lose many of its regional accents and dialects, but through the efforts of a dedicated group of experts drawn from across the southern, central and northern regions, it could once again become a working language passed on from generation to generation. Continued on page 3.