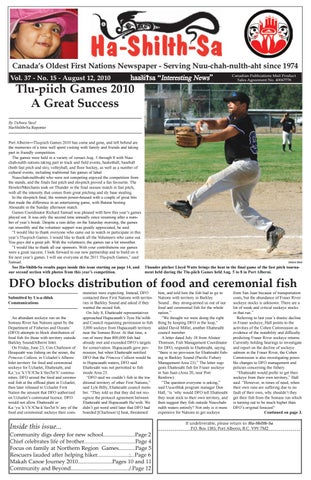 Tlu-piich Games 2010 A Great Success By Debora Steel Ha-Shilth-Sa Reporter Port Alberni—Tlu-piich Games 2010 has come and gone, and left behind are the memories of a time well spent visiting with family and friends and taking part in friendly competition. The games were held in a variety of venues Aug. 5 through 8 with Nuuchah-nulth nations taking part in track and field events, basketball, baseball (both fast pitch and slo), volleyball, and floor hockey, as well as a number of cultural events, including traditional fun games of lahal. Nuu-chah-nulth-aht who were not competing enjoyed the competition from the stands, and the finals fast pitch and slo-pitch proved a fan favourite. The Howler/Merchants took on Thunder in the final seesaw match in fast pitch, with all the intensity that comes from great pitching and sly base stealing. In the slo-pitch final, the women power-housed with a couple of great hits that made the difference in an entertaining game, with Batstar besting Ahousaht in the Sunday afternoon match. Games Coordinator Richard Samuel was pleased with how this year’s games played out. It was only the second time annually since resuming after a number of year’s break. Despite a rain delay on the Saturday morning, the games ran smoothly and the volunteer support was greatly appreciated, he said. “I would like to thank everyone who came out to watch or participate in this year’s Tlu-piich Games. I would like to thank all the Volunteers who came out. You guys did a great job. With the volunteers, the games ran a lot smoother. “I would like to thank all our sponsors. With your contributions our games were a great success. I look forward to our new partnership and to build on it for next year’s games. I will see everyone at the 2011 Tlu-piich Games,” said Debora Steel Samuel. See Ha-Shilth-Sa results pages inside this issue starting on page 14, and Thunder pitcher Lloyd Watts brings the heat in the final game of the fast pitch tournaour second section with photos from this year’s competition. ment held during the Tlu-piich Games held Aug. 5 to 8 in Port Alberni.

An abundant sockeye run on the Somass River has Nations upset by the Department of Fisheries and Oceans’ (DFO) attempts to block distribution of food fish for those with territory outside Barkley Sound/Alberni Inlet. On Friday, June 23, Con Charleson of Hesquiaht was fishing on the seiner, the Princess Colleen, in Ucluelet’s Alberni Inlet territory for food and ceremonial sockeye for Ucluelet, Ehattesaht, and Ka:’yu:’k’t’h’/Che:k’tles7et’h’ communities. DFO seized the food and ceremonial fish at the offload plant in Ucluelet, then later released to Ucluelet First Nation the amount that DFO authorized on Ucluelet’s communal licence. DFO would not allow Ehattesaht or Ka:’yu:’k’t’h’/Che:k’tles7et’h’ any of the food and ceremonial sockeye their com-

munities were expecting. Instead, DFO contacted three First Nations with territories in Barkley Sound and asked if they wanted the seized fish. On July 8, Ehattesaht representatives approached Hupacasath’s Tyee Ha’wilth and Council requesting permission to fish 3,000 sockeye from Hupacasath territory near the Somass River. At that time, a run of more than 800,000 fish had already met and exceeded DFO’s targets for conservation. Hupacasath gave permission, but when Ehattesaht notified DFO that the Princess Colleen would be in Hupacasath waters, DFO said Ehattesaht was not permitted to fish inside Area 23. “DFO said we couldn’t fish in the traditional territory of other First Nations,” said Lyle Billy, Ehattesaht council member. “They told us that they did not recognize the protocol agreement between Ehattesaht and Hupacasath Ha’wiih. We didn’t get word until later that DFO had boarded [Charleson’s] boat, threatened

him, and told him the fish had to go to Nations with territory in Barkley Sound…they strong-armed us out of our food and ceremonial fish for the whole nation.” “We thought we were doing the right thing by keeping DFO in the loop,” added David Miller, another Ehattesaht council member. A letter dated July 18 from Alistair Thomson, Fish Management Coordinator for DFO, responds to Ehattesaht, saying “there is no provision for Ehattesaht fishing in Barkley Sound (Pacific Fishery Management Area 23).” The letter suggests Ehattesaht fish for Fraser sockeye in San Juan (Area 20, near Port Renfrew). “The question everyone is asking,” said Uu-a-thluk program manager Don Hall, “is ‘why would DFO tell Ehattesaht they must stick to their own territory, and then suggest they fish outside Nuu-chahnulth waters entirely? Not only is it more expensive for Nations to get sockeye

from San Juan because of transportation costs, but the abundance of Fraser River sockeye stocks is unknown. There are a lot of weak and critical sockeye stocks in that run.” Referring to last year’s drastic decline in Fraser sockeye, Hall points to the activities of the Cohen Commission as evidence of the instability and difficulty predicting Fraser River sockeye returns. Currently holding hearings to investigate and report on the decline of sockeye salmon in the Fraser River, the Cohen Commission is also investigating possible changes to DFO management and policies concerning the fishery. “Ehattesaht would prefer to get their sockeye from their own territory,” Hall said. “However, in times of need, when their own runs are suffering due to no fault of their own, why shouldn’t they get their fish from the Somass run which is turning out to be much higher than DFO’s original forecast? Continued on page 3.