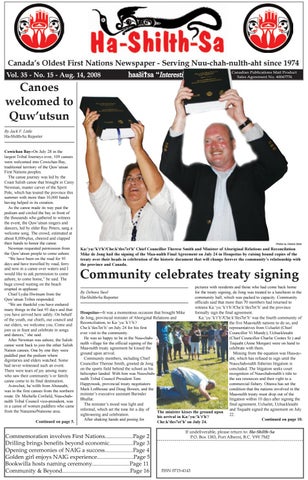 Canoes welcomed to Quw’utsun By Jack F. Little Ha-Shilth-Sa Reporter Cowichan Bay–On July 28 in the largest Tribal Journeys ever, 109 canoes were welcomed into Cowichan Bay, traditional territory of the Quw’utsun First Nations peoples. The canoe journey was led by the Coast Salish canoe that brought in Carey Newman, master carver of the Spirit Pole, which has toured the province this summer with more than 10,000 hands having helped in its creation. As the canoe made its way past the podium and circled the bay in front of the thousands who gathered to witness the event, the Quw’utsun singers and dancers, led by elder Ray Peters, sang a welcome song. The crowd, estimated at about 8,000-plus, cheered and clapped their hands to honor the canoe. Newman requested permission from the Quw’utsun people to come ashore. “We have been on the road for 95 days and have travelled by road, ferry and now in a canoe over waters and I would like to ask permission to come ashore, to come home,” he said. The huge crowd waiting on the beach erupted in applause. Chief Lydia Hwitsum from the Quw’utsun Tribes responded. “We are thankful you have endured many things in the last 95 days and that you have arrived here safely. On behalf of the youth, our chiefs, our council and our elders, we welcome you. Come and join us in feast and celebrate in songs and dances,” she said. After Newman was ashore, the Salish canoe went back to join the other Salish Nation canoes. One by one they were paddled past the podium where dignitaries and elders watched. Some had never witnessed such an event. There were tears of joy among many who saw their community’s or family canoe come to its final destination. A-in-chut, ha’wilth from Ahousaht, was in the first canoes from the northern route. Dr. Michelle Corfield, Nuu-chahnulth Tribal Council vice-president, was in a canoe of women paddlers who came from the Nanaimo/Nanoose area. Continued on page 5.

Ka:&#39;yu:&#39;k&#39;t&#39;h&#39;/Che:k&#39;tles7et&#39;h&#39; Chief Councillor Therese Smith and Minister of Aboriginal Relations and Reconcilation Mike de Jong hail the signing of the Maa-nulth Final Agreement on July 24 in Houpsitas by raising bound copies of the treaty over their heads in celebration of the historic document that will change forever the community’s relationship with the province and Canada.

Community celebrates treaty signing pictures with residents and those who had come back home for the treaty signing, de Jong was treated to a luncheon in the community hall, which was packed to capacity. Community officials said that more than 70 members had returned to witness Ka:’yu:’k’t’h’/Che:k’tles7et’h’ and the province Houpsitas—It was a momentous occasion that brought Mike formally sign the final agreement. de Jong, provincial minister of Aboriginal Relations and Ka:’yu:’k’t’h’/Che:k’tles7et’h’ was the fourth community of Reconciliation, to Ka:’yu:’k’t’h’/ the five Maa-nulth nations to do so, and Che:k’tles7et’h’ on July 24 for his first representatives from Ucluelet (Chief ever visit to the community. Councillor Vi Mundy), Uchucklesaht He was so happy to be in the Nuu-chah(Chief Councillor Charlie Cootes Sr.) and nulth village for the official signing of the Toquaht (Anne Morgan) were on hand to Maa-nulth treaty agreement he kissed the celebrate with them. ground upon arrival. Missing from the equation was Huu-ayCommunity members, including Chief aht, which has refused to sign until the Councillor Therese Smith, greeted de Jong Nuu-chah-nulth fisheries litigation is on the sports field behind the school as his concluded. The litigation seeks court helicopter landed. With him was Nuu-chahrecognition of Nuu-chah-nulth’s title to nulth Tribal Council President Tom the sea resources and their right to a Happynook, provincial treaty negotiators commercial fishery. Ottawa has set the Mark Lofthouse and Doug Bowen, and the condition that the nations involved in the minister’s executive assistant Barinder Maa-nulth treaty must drop out of the Bhullar. litigation within 10 days after signing the The minister’s mood was light and final agreement. Ucluelet, Uchucklesaht informal, which set the tone for a day of and Toquaht signed the agreement on July The minister kisses the ground upon sight-seeing and celebration. 22. his arrival in Ka:’yu:’k’t’h’/ After shaking hands and posing for Continued on page 10. Che:k’tles7et’h’ on July 24. By Debora Steel Ha-Shilth-Sa Reporter