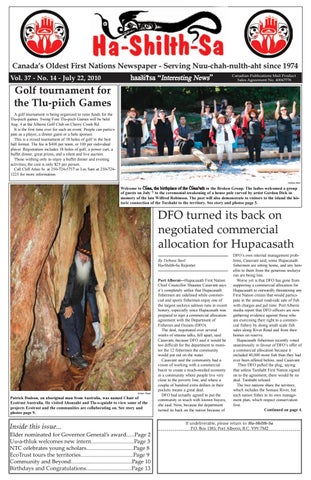 Golf tournament for the Tlu-piich Games A golf tournament is being organized to raise funds for the Tlu-piich games. Swing Fore Tlu-piich Games will be held Aug. 4 at the Alberni Golf Club on Cherry Creek Rd. It is the first time ever for such an event. People can participate as a player, a dinner guest or a hole sponsor. This is a mixed tournament of 18 holes of golf in the best ball format. The fee is $400 per team, or 100 per individual player. Registration includes 18 holes of golf, a power cart, a buffet dinner, great prizes, and a silent and live auction. Those wishing only to enjoy a buffet dinner and evening activities, the cost is only $25 per person. Call Cliff Atleo Sr. at 250-724-5757 or Les Sam at 250-7241225 for more information. Debora Steel

Welcome to C~is*aa, the birthplace of the C~is*aa%ath in the Broken Group. The ladies welcomed a group of guests on July 7 to the ceremonial awakening of a house pole carved by artist Gordon Dick in memory of the late Wilfred Robinson. The post will also demonstrate to visitors to the island the historic connection of the Tseshaht to the territory. See story and photos page 5.

Patrick Dodson, an aboriginal man from Australia, was named Chair of Ecotrust Australia. He visited Ahousaht and Tla-o-quiaht to view some of the projects Ecotrust and the communities are collaborating on. See story and photos page 9.

Port Alberni—Hupacasath First Nation Chief Councillor Shaunee Casavant says it’s completely unfair that Hupacasath fishermen are sidelined while commercial and sports fishermen enjoy one of the largest sockeye salmon runs in recent history, especially since Hupacasath was prepared to sign a commercial allocation agreement with the Department of Fisheries and Oceans (DFO). The deal, negotiated over several weeks of intense talks, fell apart, said Casavant, because DFO said it would be too difficult for the department to monitor the 12 fishermen the community would put out on the water. Casavant said the community had a vision of working with a commercial buyer to create a much-needed economy in a community where people live very close to the poverty line, and where a couple of hundred extra dollars in their pockets means a great deal. DFO had actually agreed to put the community in touch with known buyers, she said. Now, because the department turned its back on the nation because of

DFO’s own internal management problems, Casavant said, some Hupacasath fishermen are sitting home, and any benefits to them from the generous sockeye run are being lost. Worse yet is that DFO has gone from supporting a commercial allocation for Hupacasath to outwardly threatening any First Nation citizen that would participate in the annual road-side sale of fish with charges and jail time. Port Alberni media report that DFO officers are now gathering evidence against those who are exercising their right to a commercial fishery by doing small scale fish sales along River Road and from their homes on reserve. Hupacasath fishermen recently voted unanimously in favour of DFO’s offer of a commercial allocation because it included 40,000 more fish than they had ever been offered before, said Casavant. Then DFO pulled the plug, saying that unless Tseshaht First Nation signed on to the agreement, there would be no deal. Tseshaht refused. The two nations share the territory, which includes the Somass River, but each nation fishes to its own management plan, which respect conservation first. Continued on page 4.