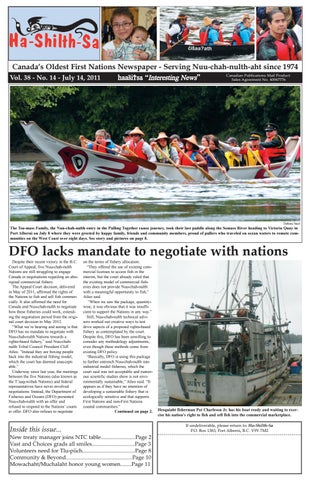 The Tsu-mass Family, the Nuu-chah-nulth entry in the Pulling Together canoe journey, took their last paddle along the Somass River heading to Victoria Quay in Port Alberni on July 8 where they were greeted by happy family, friends and community members, proud of pullers who traveled on ocean waters to remote communities on the West Coast over eight days. See story and pictures on page 8.

DFO lacks mandate to negotiate with nations Despite their recent victory in the B.C. Court of Appeal, five Nuu-chah-nulth Nations are still struggling to engage Canada in negotiations regarding an aboriginal commercial fishery. The Appeal Court decision, delivered in May of 2011, affirmed the rights of the Nations to fish and sell fish commercially. It also affirmed the need for Canada and Nuu-chah-nulth to negotiate how these fisheries could work, extending the negotiation period from the original court decision to May 2012. “What we’re hearing and seeing is that DFO has no mandate to negotiate with Nuu-chah-nulth Nations towards a rights-based fishery,” said Nuu-chahnulth Tribal Council President Cliff Atleo. “Instead they are boxing people back into the industrial fishing model, which the court has deemed unacceptable.” Underway since last year, the meetings between the five Nations (also known as the T’aaq-wiihak Nations) and federal representatives have never involved negotiations. Instead, the Department of Fisheries and Oceans (DFO) presented Nuu-chah-nulth with an offer and refused to respond to the Nations’ counter offer. DFO also refuses to negotiate

on the terms of fishery allocation. “They offered the use of existing commercial licenses to access fish in the interim, but the court already ruled that the existing model of commercial fisheries does not provide Nuu-chah-nulth with a meaningful opportunity to fish,” Atleo said. “When we saw the package, quantitywise, it was obvious that it was insufficient to support the Nations in any way.” Still, Nuu-chah-nulth technical advisors worked out creative ways to test drive aspects of a proposed rights-based fishery as contemplated by the court. Despite this, DFO has been unwilling to consider any methodology adjustments, even though these methods come from existing DFO policy. “Basically, DFO is using this package to further entrench Nuu-chah-nulth into industrial model fisheries, which the court said was not acceptable and numerous scientific studies show is not environmentally sustainable,” Atleo said. “It appears as if they have no intention of developing a sustainable fishery that is ecologically sensitive and that supports First Nations and non-First Nations coastal communities.” Continued on page 2.