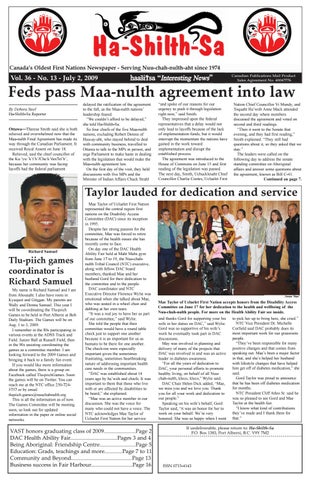 Feds pass Maa-nulth agreement into law By Debora Steel Ha-Shilth-Sa Reporter Ottawa—Therese Smith said she is both relieved and overwhelmed now that the Maa-nulth Final Agreement has made its way through the Canadian Parliament. It received Royal Assent on June 18. Relieved, said the chief councillor of the Ka:’yu:’k’t’h’/Che:k’tles7et’h’, because her community was facing layoffs had the federal parliament

delayed the ratification of the agreement to the fall, as the Maa-nulth nations’ leadership feared. “We couldn’t afford to be delayed,” she told Ha-Shilth-Sa. So four chiefs of the five Maa-nulth nations, excluding Robert Dennis of Huu-ay-aht, who stayed behind to deal with community business, travelled to Ottawa to talk to the MPs in person, and urge Parliament to make haste in dealing with the legislation that would make the Maa-nulth agreement law. On the first day of the visit, they held discussions with five MPs and the Minister of Indian Affairs Chuck Strahl

“and spoke of our reasons for our urgency to push it through legislation right now,” said Smith. They impressed upon the federal representatives that a delay would not only lead to layoffs because of the lack of implementation funds, but it would interrupt the momentum the nations have gained in the work toward implementation and disrupt the established process. The agreement was introduced to the House of Commons on June 15 and first reading of the legislation was passed. The next day, Smith, Uchucklesaht Chief Councillor Charlie Cootes, Ucluelet First

Nation Chief Councillor Vi Mundy, and Toquaht Ha’wiih Anne Mack attended the second day where members discussed the agreement and voted on second and third readings. “Then it went to the Senate that evening, and they had first reading,” Smith explained. “They still had questions about it, so they asked that we stay.” The leaders were called on the following day to address the senate standing committee on Aboriginal affairs and answer some questions about the agreement, known as Bill C-41. Continued on page 7.

Taylor lauded for dedication and service

Tlu-piich games coordinator is Richard Samuel My name is Richard Samuel and I am from Ahousaht. I also have roots in Kyuquot and Gitxsan. My parents are Wally and Donna Samuel. This year I will be co-ordinating the Tlu-piich Games to be held in Port Alberni at Bob Daily Stadium. The Games will be on Aug. 1 to 3, 2009. I remember in the 80s participating in various events at the ADSS Track and Field. Junior Ball at Russell Field; then in the 90s assisting coordinating the games as a committee member. I am looking forward to the 2009 Games and bringing it back to a family fun event. If you would like more information about the games, there is a group on Facebook called Tlu-piichGames. Soon the games will be on Twitter. You can reach me at the NTC office 250-7245757 or by email tlupiich.games@nuuchahnulth.org This is all the information as of now. The Games Committee will be meeting soon, so look out for updated information in the paper or online social networks.

Mae Taylor of Ucluelet First Nation represented the central region first nations on the Disability Access Committee (DAC) since its inception in 1995. Despite her strong passion for the committee, Mae was forced to retire because of the health issues she has recently come to face. On day one of the DAC Health Ability Fair held at Maht Mahs gym from June 17 to 19, the Nuu-chahnulth Tribal Council (NTC) executive, along with fellow DAC board members, thanked Mae and her husband Gord for their dedication to the committee and to the people. DAC coordinator and NTC Executive Director Florence Wylie was emotional when she talked about Mae, who was seated in a wheel chair and dabbing at her own tears. “It was a real joy to have her as part of our committee,” said Wylie. She told the people that their committee would have a round table check just to support one another because it is an important for us as humans to be there for one another. The check-ins were especially important given the sometimes frustrating, sometimes heartbreaking nature of addressing important health care needs in the communities. “DAC was established about 14 years ago by ha’wiih and chiefs. It was important to them that those who live with or are affected by disabilities to be heard,” she explained. “Mae was an active member in our discussion. She was the voice for many who could not have a voice. The NTC acknowledges Mae Taylor of Ucluelet First Nation for her service

Mae Taylor of Ucluelet First Nation accepts honors from the Disability Access Committee on June 17 for her dedication to the health and wellbeing of the Nuu-chah-nulth people. For more on the Health Ability Fair see inside. and thanks Gord for supporting your his wife in her duties on DAC,” said Wylie. Gord was so supportive of his wife’s work he eventually took part in DAC discussions. May was involved in planning and delivery of many of the projects that DAC was involved in and was an active leader in diabetes awareness. “For all the years of dedication to DAC, your personal efforts to promote healthy living, on behalf of all Nuuchah-nulth, kleco, kleco,” Wylie said. DAC Chair Helen Dick added, “Mae, we miss you and we love you. Thank you for all your work and dedication to our people.” Speaking on his wife’s behalf, Gord Taylor said, “it was an honor for her to work on your behalf. We’re very honored. She was so happy when I went

to pick her up to bring here, she cried.” NTC Vice President Dr. Michelle Corfield said DAC probably does its most important work for our grassroots people. “They’ve been responsible for many positive changes and that comes from speaking out. Mae’s been a major factor in that, and she’s helped her husband with lifestyle changes that have helped him get off of diabetes medication,” she said. Gord Taylor was proud to announce that he has been off diabetes medication for months. NTC President Cliff Atleo Sr. said he was so pleased to see Gord and Mae Taylor at the health fair. “I know what kind of contributions they’ve made and I thank them for that.”