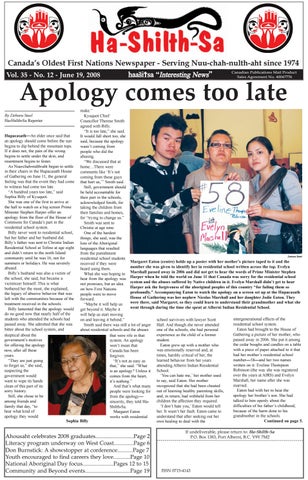 Apology comes too late make.” Kyuquot Chief Councillor Therese Smith agreed with Billy. “It is too late,” she said. Hupacasath—An elder once said that It would fall short too, she an apology should come before the sun said, because the apology begins to dip behind the mountain tops. wasn’t coming from If it does not, the pain of the wrong people who did the begins to settle under the skin, and abusing. resentment begins to fester. “We discussed that at As Nuu-chah-nulth-aht began to settle home…There were in their chairs in the Hupacasath House comments like ‘It’s not of Gathering on June 11, the general coming from those guys feeling was that the event they had come that hurt us,’” Smith said. to witness had come too late. Still, government should “A hundred years too late,” said be held accountable for Sophia Billy of Kyuquot. their part in the schools, She was one of the first to arrive at acknowledged Smith, for the hall to watch on a big screen Prime taking the children from Minister Stephen Harper offer an their families and homes, apology from the floor of the House of for “trying to change us.” Commons for Canada’s part in the Smith was sent to residential school system. Christie at age nine. Billy never went to residential school, One of the hardest but her father and her husband did. things, she said, was the Billy’s father was sent to Christie Indian loss of the Aboriginal Residential School at Tofino at age eight languages that resulted and didn’t return to the north Island from the punishment Debora Steel community until he was 16, not for residential school students Margaret Eaton (centre) holds up a poster with her mother’s picture taped to it and the summers or holidays. He was severely received if they were number she was given to identify her in residential school written across the top. Evelyn abused. heard using them. Billy’s husband was also a victim of What she was hoping to Marshall passed away in 2006 and did not get to hear the words of Prime Minister Stephen the school, she said, but became a hear from the apology was Harper when he told the world on June 11 that Canada was sorry for the residential school system and the abuses suffered by Native children in it. Evelyn Marshall didn’t get to hear victimizer himself. This is what not promises, but an idea Harper ask the forgiveness of the aboriginal peoples of this country “for failing them so bothered her the most, she explained; on how First Nations profoundly.” Accompanying Eaton to watch the apology on a screen set up at the Hupacasath the legacy of abusive behavior that was people were to move House of Gathering was her nephew Nicolas Marshall and her daughter Jodie Eaton. They left with the communities because of the forward. were there, said Margaret, so they could learn to understand their grandmother and what she treatment received in the schools. “Maybe it will help us went through during the time she spent at Alberni Indian Residential School. Billy lamented that the apology would get beyond it. Maybe it do no good now that nearly half of the will help us start moving students who attended the schools had intergenerational effects of the on and leaving it behind.” school survivors with lawyer Scott passed away. She admitted that she was residential school system. Smith said there was still a lot of anger Hall. And though she never attended bitter about the school system, and Eaton had brought to the House of about residential schools and the abuses one of the schools, she had personal Gathering a picture of her mother, who experience as the child of a former skeptical about the that were rife in that passed away in 2006. She put it among student. government’s motives system. An apology the cedar boughs and candles on a table Eaton grew up with a mother who for offering the apology won’t mean that with a piece of paper attached to it that was emotionally reserved and, at now, after all these Canada has been had her mother’s residential school times, harshly critical of her; the years. forgiven. number—58—and her two names learned behavior from her years “They are just going “It’s not as easy as written on it: Eveline Thompson attending Alberni Indian Residential to forget us,” she said, that,” she said. “What Robinson (the way she was registered suspecting the is an apology? Unless it School. over the years at AIRS) and Evelyn ‘You can hate me,’ her mother used government would comes from the heart, Marshall, her name after she was to say, said Eaton. Her mother want to wipe its hands it’s nothing.” married. clean of this part of its And that’s what many recognized that she had been cheated Eaton had with her to hear the out of learning healthy parenting skills, sorry history. people were looking for apology her brother’s son. She had and, in return, had withheld from her Still, she chose to be from the apology— talked to him openly about the children the affection they required. among friends and sincerity, they told Hadifficulties of his father’s childhood, ‘I don’t hate you,’ Eaton would tell family that day, “to Shilth-Sa. because of the harm done to his her. It wasn’t her fault. Eaton came to hear what kind of Margaret Eaton grandmother in the schools. understand that after seeking out her apology they would works with residential Sophia Billy Continued on page 5. own healing to deal with the By Debora Steel Ha-Shilth-Sa Reporter