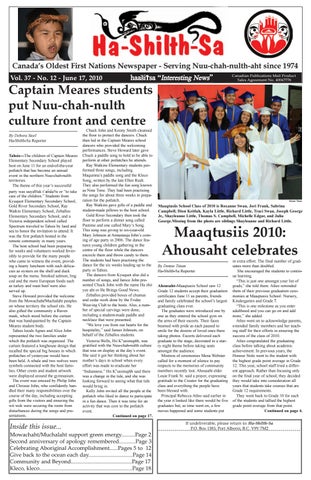 Captain Meares students put Nuu-chah-nulth culture front and centre By Debora Steel Ha-Shilth-Sa Reporter Tahsis—The children of Captain Meares Elementary Secondary School played host on June 11 for an end-of-the-year potlatch that has become an annual event in the northern Nuu-chah-nulth territories. The theme of this year’s successful party was uuya&gt;luk t’atn~a&#96;a%is or “to take care of the children.” Students from Kyuquot Elementary Secondary School, Gold River Secondary School, Ray Watkin Elementary School, Zeballos Elementary Secondary School, and a Victoria independent school called Spectrum traveled to Tahsis by land and sea to honor the invitation to attend. It was the first potlatch hosted in the remote community in many years. The host school had been preparing for weeks and volunteers worked feverishly to provide for the many people who came to witness the event, providing a hearty luncheon with such delicacies as oysters on the shell and duck soup on the menu. Smoked salmon, ling cod and the more European foods such as turkey and roast beef were also served up. Steve Howard provided the welcome from the Mowachaht/Muchalaht peoples on whose territory the school sits. He also gifted the community a Raven mask, which stood before the curtain that was hand-painted by the Captain Meares student body. Tahsis locals Agnes and Alice John represented the two families under which the potlatch was organized. The curtain featured a longhouse design that recalled the special big houses in which potlatches of yesteryear would have been held. A whale and two wolves were symbols connected with the host families. Other crests and student artwork were displayed around the gymnasium. The event was emceed by Philip John and Chrissie John, who confidently handled their many responsibilities over the course of the day, including accepting gifts from the visitors and ensuring the wit wok were securing the room from disturbances during the songs and presentations.

Chuck John and Kenny Smith cleansed the floor to protect the dancers. Chuck then led in the Captain Meares school dancers who provided the welcoming performances. Steve Howard later gave Chuck a paddle song to hold to be able to perform at other potlatches he attends. Ray Watkins Elementary students performed three songs, including Maquinna’s paddle song and the Kleco Song, written by the late Ellen Rush. They also performed the fun song known as Nine Time. They had been practising the songs for about three weeks in preparation for the potlatch. Ray Watkins gave gifts of a paddle and student-made pillows to the host school. Gold River Secondary then took the floor to perform a dinner song called Pastime and one called Mary’s Song. This song was giving to six-year-old Mary Johnson at Annastasja John’s coming of age party in 2006. The dance features young children gathering in the centre of the floor while the dancers encircle them and throw candy to them. The students had been practising the dance for the six weeks leading up to the party in Tahsis. The dancers from Kyuquot also did a number of songs, and Janice John presented Chuck John with the name Ha shii yee aht or He Brings Good News. Zeballos provided boxes of chumas and cedar work done by the Friday Weaving Club to the hosts. Also, a number of special carvings were done, including a student-made paddle and necklace that were presented. “We love you from our hearts for the hospitality,” said James Johnson, on behalf of the Zeballos students. Victoria Wells, Hii K#usiinups^+, was gratified with the Nuu-chah-nulth culture that was on display at the day’s event. She said it got her thinking about her mother’s days in school when every effort was made to eradicate her “Indianness.” Hii K#usiinups^+ said there was a change in the tide, and she was looking forward to seeing what that tide would bring in. Kelly John invited all the people at the potlatch who liked to dance to participate in a fun dance. Then it was time for an activity that was core to the potlatch event. Continued on page 17.

Maaqtusiis 2010: Ahousaht celebrates By Denise Titian Ha-Shilth-Sa Reporter Ahousaht–Maaqtusiis School saw 12 Grade 12 students accept their graduation certificates June 11 as parents, friends and family celebrated the school’s largest graduating class ever. The graduates were introduced one by one as they entered the school gym on the arms of their escorts. Their faces beamed with pride as each paused to smile for the dozens of loved ones there taking photos. Escorts delivered each graduate to the stage, decorated in a starry night theme before taking seats amongst the audience. Mistress of ceremonies Mena Webster called for a moment of silence to pay respects to the memories of community members recently lost. Ahousaht elder Louie Frank Sr. said a prayer, expressing gratitude to the Creator for the graduating class and everything the people have been blessed with. Principal Rebecca Atleo said earlier in the year it looked like there would be five graduates but, as time went on, a few moves happened and some students put

in extra effort. The final number of graduates more than doubled. She encouraged the students to continue learning. “This is just one amongst your list of grads,” she told them. Atleo reminded them of their previous graduation ceremonies at Maaqtusiis School: Nursery, Kindergarten and Grade 7. “This is one milestone as you enter adulthood and you can go on and add more,” she added. Atleo went on to acknowledge parents, extended family members and her teaching staff for their efforts in ensuring the success of the class of 2010. Atleo congratulated the graduating class before talking about academic achievement. In previous years, the Honour Stole went to the student with the highest grade point average in Grade 12. This year, school staff tried a different approach. Rather than focusing only on the final year of school, they decided they would take into consideration all years that students take courses that are Grade 12 requirements. They went back to Grade 10 for each of the students and tallied the highest grade point average from that point. Continued on page 4.