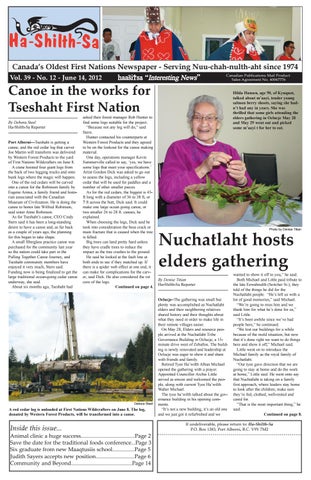 Canoe in the works for Tseshaht First Nation By Debora Steel Ha-Shilth-Sa Reporter Port Alberni—Tseshaht is getting a canoe, and the red cedar log that carver Joe Martin will transform was delivered by Western Forest Products to the yard of First Nations Wildcrafters on June 8. A crane hoisted four giant logs from the back of two logging trucks and onto bunk logs where the magic will happen. One of the red cedars will be carved into a canoe for the Robinson family by Eugene Arima, a family friend and historian associated with the Canadian Museum of Civilization. He is doing the canoe to honor late Wilfred Robinson, said sister Anne Robinson. As for Tseshaht’s canoe, CEO Cindy Stern said it has been a long-standing desire to have a canoe and, as far back as a couple of years ago, the planning for this began to take shape. A small fiberglass practice canoe was purchased for the community last year so the nation could take part in the Pulling Together Canoe Journey, and Tseshaht community members have enjoyed it very much, Stern said. Funding now is being finalized to get the large traditional ocean-going cedar canoe underway, she said. About six months ago, Tseshaht had

asked their forest manager Rob Hunter to find some logs suitable for the project. “Because not any log will do,” said Stern. Hunter contacted his counterparts at Western Forest Products and they agreed to be on the lookout for the canoe making material. One day, operations manager Kevin Summerville called to say, ‘yes, we have some logs that meet your specifications.’ Artist Gordon Dick was asked to go out to assess the logs, including a yellow cedar that will be used for paddles and a number of other smaller pieces. As for the red cedars, the biggest is 45ft long with a diameter of 36 to 38 ft, or 7 ft across the butt, Dick said. It could make one large ocean going canoe, or two smaller 26 to 28 ft. canoes, he explained. When choosing the logs, Dick said he took into consideration the boss crack or main fracture that is caused when the tree is felled. Big trees can land pretty hard unless they have cradle trees to reduce the impact as the tree crashes to the ground. He said he looked at the fault line at both ends to see if they matched up. If there is a spider web effect at one end, it can make for complications for the carver, said Dick. He also considered the rot core of the logs. Continued on page 4.

A red cedar log is unloaded at First Nations Wildcrafters on June 8. The log, donated by Western Forest Products, will be transformed into a canoe.

Hilda Hansen, age 90, of Kyuquot, talked about m’aayi, tender young salmon berry shoots, saying she hadn’t had any in years. She was thrilled that some girls attending the elders gathering in Oclucje May 28 and May 29 went out and picked some m’aayi t for her to eat.

Nuchatlaht hosts elders gathering By Denise Titian Ha-Shilth-Sa Reporter Oclucje–The gathering was small but plenty was accomplished as Nuchatlaht elders and their neighboring relatives shared history and their thoughts about what they need in order to make life in their remote villages easier. On May 28, Elders and resource people arrived at the Nuchatlaht Tribe Governance Building in Oclucje, a 15minute drive west of Zeballos. The building is newly renovated and leadership at Oclucje was eager to show it and share with friends and family. Retired Tyee Ha’wilth Alban Michael opened the gathering with a prayer. Appointed Councillor Archie Little served as emcee and welcomed the people, along with current Tyee Ha’wilth Walter Michael. The tyee ha’wilth talked about the governance building in his opening comments. “It’s not a new building, it’s an old one and we just got it refurbished and we

wanted to show it off to you,” he said. Both Michael and Little paid tribute to the late Eewahnulth (Seitcher Sr.); they told of the things he did for the Nuchatlaht people. “He’s left us with a lot of good memories,” said Michael. “We’re going to miss him and we thank him for what he’s done for us,” said Little. “It’s been awhile since we’ve had people here,” he continued. “We lost our buildings for a while because of the mold situation, but now that it’s done right we want to do things here and show it off,” Michael said. Little went on to introduce the Michael family as the royal family of Nuchatlaht. “Our tyee gave direction that we are going to stay at home and do the work at home,” Little said. He went onto say that Nuchatlaht is taking on a family first approach, where leaders stay home to look after the children; make sure they’re fed, clothed, well-rested and cared for. “That is the most important thing,” he said. Continued on page 8.