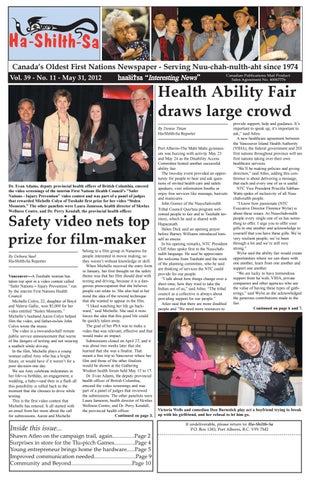 Safety video nets top prize for film-maker By Debora Steel Ha-Shilth-Sa Reporter Vancouver—A Tseshaht woman has taken top spot in a video contest called “Safer Nations – Injury Prevention.” run by the interim First Nations Health Council Michelle Colyn, 22, daughter of Boyd and Valerie Gallic, won $5,000 for her video entitled “Stolen Moments.” Michelle’s husband Aaron Colyn helped film the video, and father-in-law John Colyn wrote the music. The video is a two-and-a-half minute public service announcement that warns of the dangers of texting and not wearing a seatbelt while driving. In the film, Michelle plays a young woman called Amy who has a bright future, or would have if it weren’t for a poor decision one day. We see Amy celebrate milestones in her life—a birthday, an engagement, a wedding, a baby—and then in a flash all this possibility is rolled back to the moment that she chooses to drive while texting. This is the first video contest that Michelle has entered. It all started with an email from her mom about the call for submissions. Aaron and Michelle

belong to a film group in Nanaimo for people interested in movie making, so they weren’t without knowledge or skill. When Michelle received the entry form in January, her first thought on the safety theme was that her film should deal with texting and driving, because it is a dangerous preoccupation that she believes people can relate to. She also had in her mind the idea of the rewind technique that she wanted to appear in the film. “I liked watching her life go backward,” said Michelle. She said it reinforces the idea that this good life could be quickly taken away. The goal of her PSA was to make a video that was relevant, effective and that would make an impact. Submissions closed on April 27, and it was about two weeks later that she learned that she was a finalist. That meant a free trip to Vancouver where her film and those of the other finalists would be shown at the Gathering Wisdom health forum held May 15 to 17. Dr. Evan Adams, the deputy provincial health officer of British Columbia, emceed the video screenings and was part of a panel of judges that reviewed the submissions. The other panelists were Laura Jameson, health director of Skwlax Wellness Centre, and Dr. Perry Kendall, the provincial health officer. Continued on page 3.

Port Alberni–The Maht Mahs gymnasium was buzzing with activity May 23 and May 24 as the Disability Access Committee hosted another successful ability fair. The two-day event provided an opportunity for people to hear and ask questions of invited health care and safety speakers, visit information booths or enjoy free services like massage, haircuts and manicures. John Gomez of the Nuu-chah-nulth Tribal Council Quu%asa program welcomed people to fair and to Tseshaht territory, which he said is shared with Hupacasath. Helen Dick said an opening prayer before Barney Williams introduced himself as emcee. In his opening remarks, NTC President Cliff Atleo spoke first in the Nuu-chahnulth language. He said he appreciates the welcome from Tseshaht and the work of the planning committee, who he said are thinking of services the NTC could provide for our people. “I talk about how things change over a short time; how they tried to take the Indian out of us,” said Atleo. “The tribal council as a collective is always about providing support for our people.” Atleo said that there are more disabled people and “We need more resources to

provide support, help and guidance. It’s important to speak up, it’s important to ask,” said Atleo. A new healthcare agreement between the Vancouver Island Health Authority (VIHA), the federal government and 203 first nations throughout province will see first nations taking over their own healthcare services. “We’ll be making policies and giving direction,” said Atleo, adding this conference is about delivering a message; that each and every one of us is useful. NTC Vice President Priscilla SabbasWatts spoke of inclusivity of all Nuuchah-nulth people. “I know how passionate (NTC Executive Director Florence Wylie) is about these issues. As Nuu-chah-nulth people every single one of us has something to offer. I urge you to offer your gifts to one another and acknowledge to yourself that you have these gifts. We’re very resilient people; we’ve been through a lot and we’re still very strong.” Wylie said the ability fair would create opportunities where we can share with one another, learn from one another and support one another. “We are lucky to have tremendous support from ha’wiih, VIHA, private companies and other agencies who see the value of having these types of gatherings,” said Wylie as she acknowledged the generous contributions made to the fair. Continued on page 6 and 7.

Victoria Wells and comedian Don Burnstick play act a boyfriend trying to break up with his girlfriend, and her refusal to let him go. If undeliverable, please return to: Ha-Shilth-Sa P.O. Box 1383, Port Alberni, B.C. V9Y 7M2