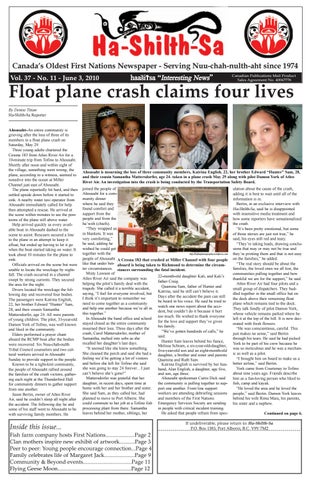 Float plane crash claims four lives By Denise Titian Ha-Shilth-Sa Reporter Ahousaht–An entire community is grieving after the loss of three of its members in a float plane crash on Saturday, May 29. Three young adults chartered the Cessna 183 from Atleo River Air for a 10-minute trip from Tofino to Ahousaht. Shortly after noon and within sight of the village, something went wrong; the plane, according to a witness, seemed to nosedive into the ocean at Miller Channel just east of Ahousaht. The plane reportedly hit hard, and then settled upside down before it started to sink. A nearby water taxi operator from Ahousaht immediately called for help then attempted a rescue. He arrived at the scene within minutes to see the pontoons of the plane still above water. Help arrived quickly as every available boat in Ahousaht dashed to the scene to assist. Rescuers secured a line to the plane in an attempt to keep it afloat, but ended up having to let it go when the boat started taking on water. It took about 10 minutes for the plane to sink. Officials arrived on the scene but were unable to locate the wreckage by nightfall. The crash occurred in a channel swept by strong currents. They secured the area for the night. Divers located the wreckage the following day and recovered four bodies. The passengers were Katrina English, 22, her brother Edward “Hunter” Sam, 28, and their cousin Samantha Mattersdorfer, age 24. All were parents of young children. The pilot, 33-year-old Damon York of Tofino, was well known and liked in the community. Elders performed a prayer chant aboard the RCMP boat after the bodies were recovered. Six Nuu-chah-nulth Tribal Council counselors and two cultural workers arrived in Ahousaht Sunday to provide support to the people. Known to be a tight-knit community, the people of Ahousaht rallied around the families of the crash victims, gathering each night at the Thunderbird Hall for community dinners to gather support from one another. Jason Bertin, owner of Atleo River Air, said he couldn’t sleep all night after the accident. The following day he and some of his staff went to Ahousaht to be with surviving family members. He

Ahousaht is mourning the loss of three community members, Katrina English, 22, her brother Edward “Hunter” Sam, 28, and their cousin Samantha Mattersdorfer, age 24. taken in a plane crash May 29 along with pilot Damon York of Atleo River Air. An investigation into the crash is being conducted by the Transportation Safety Board. joined the people of Ahousaht for a community dinner where he said they found comfort and support from the people and from the ha’wiih (chiefs). “They wrapped us in blankets. It was very comforting,” he said, adding he wished he could get http://tofinophotography.wordpress.com together with the people of Ahousaht A Cessna 183 that crashed at Miller Channel with four people like that under bet- aboard is being taken to Richmond to determine the circumter circumstances. stances surrounding the fatal incident. Misty Lawson of 22-month-old daughter Kali, and Kali’s Atleo River Air said the company was father Craig. helping the pilot’s family deal with the Qaamina Sam, father of Hunter and tragedy. She called it a terrible accident, Katrina, said he still can’t believe it. saying, “I feel for everyone involved, but Days after the accident the pain can still I think it’s important to remember we be heard in his voice. He said he tried to need to come together as a community watch one news report about the acciand help one another because we’re all in dent, but couldn’t do it because it hurt this together.” too much. He wished to thank everyone In Ahousaht the band office and school for the love and support they’ve given stayed closed as the entire community his family. mourned their loss. Three days after the “We’ve gotten hundreds of calls,” he crash, Carol Mattersdorfer, mother of said. Samantha, melted into sobs as she Hunter Sam leaves behind his fiancé, recalled her daughter’s last days. Melissa Schram, a six-year-old-daughter, “It seemed like she knew something. five-year-old son and an eight-month-old She cleaned the porch and said she had a daughter, a brother and sister and parents feeling we’d be getting a lot of visitors Qaamina and Ruth Sam. and before she left for Tofino she said Katrina English is survived by her husshe was going to stay 24 forever…I just band, Alan English, a daughter, age five, can’t believe she’s gone!” and son, age three. Mattersdorfer was grateful that her Ahousaht spokesman Curtis Dick said daughter, in recent days, spent time at the community is pulling together to suphome with her and her brother and sister. port one another. Front line support She said Sam, as they called her, had workers are attending debriefing sessions planned to move to Port Alberni. She and members of the First Nations could commute to her job at a Tofino fish Emergency Services Society are sending processing plant from there. Samantha in people with critical incident training. leaves behind her mother, siblings, her He asked that people refrain from spec-

ulation about the cause of the crash, adding it is best to wait until all of the information is in. Bertin, in an exclusive interview with Ha-Shilth-Sa, said he is disappointed with insensitive media treatment and how some reporters have sensationalized the crash. “It’s been pretty emotional, but some of those stories are just not true,” he said, his eyes still red and teary. “They’re taking leads, drawing conclusions that may or may not be true and they’re printing them and that is not easy on the families,” he added. “The real story should be about the families, the loved ones we all lost, the communities pulling together and how thankful we are for the support,” he said. Atleo River Air had four pilots and a small group of dispatchers. They huddled together in the small office hut on the dock above their remaining float plane which remains tied to the dock. They talk fondly of pilot Damon York, whose vehicle remains parked where he left it at the top of the hill. It is now decorated with fresh flowers. “He was conscientious, careful. This just makes no sense,” said Bertin through his tears. He said he had picked York to be part of his crew because he was so meticulous and he was a mechanic as well as a pilot. “I brought him on board to make us a better airline,” said Bertin. York came from Courtenay to Tofino about nine years ago. Friends describe him as a fun-loving person who liked to fish, camp and kayak. “He loved the area and he loved the people,” said Bertin. Damon York leaves behind his wife Rima Mara, his parents, his sister and a nephew. Continued on page 6.