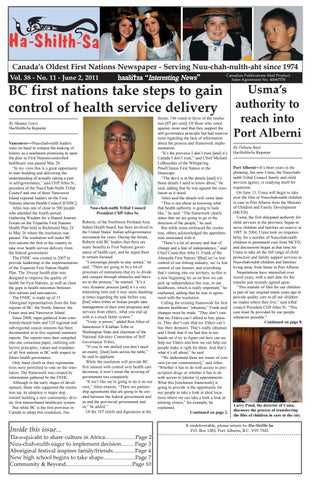 Usma’s BC first nations take steps to gain control of health service delivery authority to By Shauna Lewis Ha-Shilth-Sa Reporter Vancouver—Nuu-chah-nulth leaders were on hand to witness the making of history as a resolution promising to open the door to First Nations-controlled healthcare was passed May 26. “In my view this is a great opportunity to start building and delivering the understanding of actually taking a part in self-governance,” said Cliff Atleo Sr., president of the Nuu-Chah-Nulth Tribal Council and one of three Vancouver Island regional leaders on the First Nations interim Health Council [FNHC]. Atleo was one of close to 500 people who attended the fourth annual Gathering Wisdom for a Shared Journey Forum on the Tripartite First Nations Health Plan held in Richmond May 24 to May 26 where the resolution was passed. The resolution will make BC first nations the first in the country to take over health service delivery from the federal government. The FNHC was created in 2007 to provide leadership in the implementation of the Tripartite First Nation Health Plan. The 10-year health plan was designed to improve the quality of health for First Nations, as well as close the gaps in health outcomes between first nations and non-natives. The FNHC is made up of 15 Aboriginal representatives from the four regions of BC: the North, Interior, the Fraser area and Vancouver Island. Since 2008, input gathered from community-based hubs and 120 regional and sub-regional caucus sessions has been documented in to five regional summary reports. The reports were then compiled into one consensus paper, outlining collective principles, values and mandates of all first nations in BC with respect to future health governance. Only band chiefs or their representatives were permitted to vote on the resolution. The framework was created by information gathered by the FNHC. Although in the early stages of development, those who supported the resolution say its adoption is major step toward building a new community- driven, first nation-based healthcare system. But while BC is the first province in Canada to adopt this resolution, Jim

Nuu-chah-nulth Tribal Council President Cliff Atleo Sr. Roberts, of the Northwest Portland Area Indian Health board, has been involved in the United States’ Indian self-governance movement for years. During the forum, Roberts told BC leaders that there are many benefits to First Nations governance of health care, and he urged them to remain focused. “I encourage people to stay united,” he said. “There are going to be a lot of processes of institutions that try to divide and conquer through obstacles and barriers to the process,” he warned. “It’s a very dynamic process [and] it’s a very interesting time and it may seem daunting at times regarding the task before you, [but] when tribes or Indian people take management of their own programs and services from others...what you end up with is a much better system.” “Unity is power,” added Ron Allen of Jamestown S’Klallam Tribe in Washington State and chairman of the National Advisory Committee of Self Governance Tribes. “If you’re not unified you don’t need an enemy. [Just] look across the table,” he said to applause. While the resolution will provide BC first nations with control over health care decisions, it won’t mean the severing of government ties completely. “It isn’t like we’re going to do it on our own,” Atleo ensures. “There are partnership agreements that are going to be created between the federal government and us and the provincial government and us,” he added.” Of the 167 chiefs and dignitaries at the

forum, 146 voted in favor of the resolution [87 per cent]. Of those who voted against, most said that they support the self governance principle but had reservations regarding the lack of information about the process and framework implementation. “It’s the province I don’t trust [and] it’s Canada I don’t trust,” said Chief Michael LeBourdais of the Whispering Pine/Clinton First Nation in the Shuswaps. “The devil is in the details [and] it’s those details I need to know about,” he said, adding that he was against the resolution as it stood. Atleo said the details will come later. “This is not about us knowing what that health authority is going to look like,” he said. “The framework clearly states that we are going to go in the direction of the people,” he said. But while some embraced the resolution, others acknowledged the apprehension associated with it. “There’s a lot of anxiety and fear of change and a fear of independence,” said Chief Councillor John O. Frank of the Ahousaht First Nation.“[But] we’ve lost control of our fishing industry, we’ve lost control of our forestry and everything that’s coming into our territory, so this is a new beginning for us on how we can pick up independence this way, in our healthcare, which is really important,” he explained, adding that he was in agreement with the resolution. Calling the existing framework for first nations healthcare “inhuman,” Frank said changes must be made. “They don’t care that my Elders can’t afford to buy glasses. They don’t care that my Elders can’t buy their dentures. That’s really inhuman and I think that if we had this in our hands we’d try to figure out how can we help our Elders and how we can help our people make it right for them. And that’s what it’s all about,” he said. “We understand there are issues of concern [in our communities],” said Atleo. “Whether it has to do with access to prescription drugs or whether it has to do with access to [doctor’s] appointments… What this [resolution framework] is going to provide is the opportunity for our people to take a look at ideal locations where we can take a look a look at piloting clinics,” for example, he explained. Continued on page 2.

By Debora Steel Ha-Shilth-Sa Reporter Port Alberni—It’s been years in the planning, but now Usma, the Nuu-chahnulth Tribal Council family and child services agency, is readying itself for expansion. On June 13, Usma will begin to take over the files of Nuu-chah-nulth children in care in Port Alberni from the Ministry of Children and Family Development (MCFD). Usma, the first delegated authority for child services in the province, began to serve children and families on reserve in 1987. In 2004, Usma took on responsibility for a number of Nuu-chah-nulth children in permanent care from MCFD, and discussions began at that time for Usma to take on the full range of child protection and family support services to Nuu-chah-nulth children and families living away from home in Port Alberni. Negotiations have intensified over recent years, with a start date for the transfer just recently agreed upon. “This transfer of files for our children is part of our original intent years ago to provide quality care to all our children no matter where they live,” said tribal council President Cliff Atleo Sr. “This care must be provided by our people whenever possible.” Continued on page 8.

Larry Pond, the director of Usma, discusses the process of transferring the files of children in care in the city.