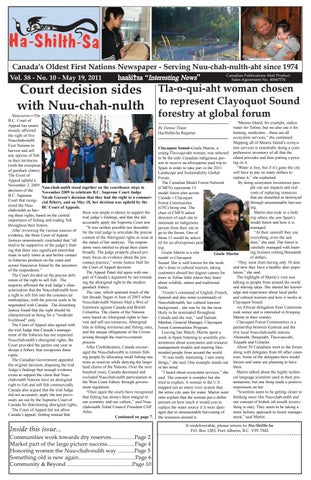 Vancouver—The B.C. Court of Appeal has unanimously affirmed the right of five Nuu-chah-nulth First Nations to harvest and sell any species of fish in their territories (with the exception of geoduck clams). The Court of Appeal upheld a November 3, 2009 Nuu-chah-nulth stood together on the courthouse steps in decision of the November 2009 to celebrate B.C. Supreme Court Judge B.C. Supreme Nicole Garson’s decision that they had the right to a commerCourt that recog- cial fishery, and on May 18, her decision was upheld by the nized the NuuBC Court of Appeals. chah-nulth as havthere was ample evidence to support the ing these rights, based on the central trial judge’s findings, and that she did importance of fishing and trading fish accurately apply the Supreme Court test. throughout their history. “It was neither possible nor desirable After reviewing the various sources of for the trial judge to articulate the precise evidence, the three Court of Appeal content of the Aboriginal rights at issue at Justices unanimously concluded that “all the outset of her analysis. The respontend to be supportive of the judge’s finddents were entitled to plead their claim ing that there was significant intertribal broadly. The judge properly placed pritrade in early times at and before contact mary focus on evidence about the prein fisheries products on the coast and contact practice,” wrote Justice Hall for across Vancouver Island by the ancestors the Court of Appeal decision. of the respondents.” The Appeal Panel did agree with one The Court divided on the precise defipart of Canada’s argument by not extendnition of the right to sell fish. The ing the aboriginal right to the modern majority affirmed the trial Judge’s chargeoduck fishery. acterization that the Nuu-chah-nulth have The case, which spanned much of the a right to sell fish into the commercial last decade, began in June of 2003 when marketplace, with the precise scale to be Nuu-chah-nulth Nations filed a Writ of negotiated with Canada. The dissenting Summons against Canada and British Justice found that the right should be Columbia. The claims of the Nations characterized as being for a “moderate were based on Aboriginal rights to harlivelihood” only. vest and sell sea resources, Aboriginal The Court of Appeal also agreed with title to fishing territories and fishing sites, the trial Judge that Canada’s manageand the unique obligations of the Crown ment of the fisheries has not respected arising through the reserve-creation Nuu-chah-nulth’s aboriginal rights; the process. Court provided the parties one year to After Confederation, Canada encourdesign a fishery that recognizes these aged the Nuu-chah-nulth to remain fishrights. ing people by allocating small fishing staThe Canadian Government appealed tions as reserves while denying the larger the original decision, disputing the trial land claims of the Nations. Over the next Judge’s findings that enough evidence hundred years, Canada decreased and exists to support the claim that Nuuexcluded Nuu-chah-nulth participation in chah-nulth Nations have an aboriginal the West Coast fishery through governright to fish and sell fish commercially. ment regulation. Canada also argued that the trial Judge “Once again the courts have recognized did not accurately apply the test previthat fishing has always been integral to ously set out by the Supreme Court of our economy and our culture,” said NuuCanada for determining aboriginal rights. chah-nulth Tribal Council President Cliff The Court of Appeal did not allow Atleo. Canada’s appeal, finding instead that Continued on page 7.

Tla-o-qui-aht woman chosen to represent Clayoquot Sound forestry at global forum “Meares Island, for example, makes water for Tofino, but we also use it for hunting, medicines…these are all ecosystem services,” she continued. Mapping all of Meares Island’s ecosystem services is essentially doing a comClayoquot Sound–Gisele Martin, a young Tla-o-qui-aht woman, was selected prehensive inventory of all that the island provides and then putting a price to be the only Canadian indigenous pertag on it. son to receive an all-expense paid trip to “Water is free, but if it’s gone the city Spain in order to take part in the 2011 will have to pay so many dollars to Landscape and Sustainability Global replace it,” she explained. Forum. By doing ecosystem inventories peoThe Canadian Model Forest Network ple can see impacts and real (CMFN) represents 15 costs of replacing resources model forest sites across that are disturbed or destroyed Canada – Clayoquot through unsustainable harvestForest Communities ing. (CFC) being one. The Martin also took in a field chair of CMFN asked trip where she saw Spain’s directors of each site to model forest and how it is nominate an indigenous managed. person from their site to “At their sawmill they use go to the forum. One of everything, even the saw those 15 would be selectdust,” she said. The forest is ed for an all-expenses paid carefully managed with hunttrip. ing licenses costing thousands Gisele Martin is a role Gisele Martin of dollars. model in Clayoquot “They went from having only 50 deer Sound. She is well known for the work and now they have a healthy deer popushe’s done in cultural tourism, taking lation,” she said. customers aboard her dugout canoes for The highlight of Martin’s visit was tours in Tofino Inlet where they learn talking to people from around the world about wildlife, nature and traditional and sharing ideas. She shared her knowlfoods. “Gisele’s command of English, French, edge and experience about local parks and cultural tourism and how it works in Spanish and also some (command) of Clayoquot Sound. Nuu-chah-nulth; her cultural tourism An African delegation from Cameroon background…she was by far the most took notice and is interested in bringing likely to be nominated throughout Martin to their country. Canada and she was,” said Satnam Clayoquot Forest Communities is a Manhas, General Manager, Clayoquot partnership between Ecotrust and the Forest Communities Program. five local Nuu-chah-nulth nations: Leaving late March, Martin spent a Ahousaht, Hesquiaht, Tla-o-qui-aht, week in Spain listening to scientific presentations about ecosystems and resource Toquaht and Ucluelet. About 30 Canadians went to the forum management models and meeting likealong with delegates from 60 other counminded people from around the world. tries. Some of the delegates have model “It was really interesting. I saw many things,” she said. One example stands out forests and some are planning to have them. in her mind. Martin talked about the highly techni“I heard about ecosystem services,” she cal language scientists used in their presaid. The concept is complex but she sentations, but one thing made a positive tried to explain. A woman in the U.S. impression on her. mapped out an entire river system that “Scientists seem to be getting closer to the entire city uses for water. Martin went thinking more like Nuu-chah-nulth and onto explain that the woman put a dollar our concept of hishuk ish tswalk (everyamount on how much it would cost to thing is one). They seem to be taking a replace the water source if it were dammore holistic approach to forest manageaged due to unsustainable harvesting of ment,” said Martin. the resources around it. By Denise Titian Ha-Shilth-Sa Reporter