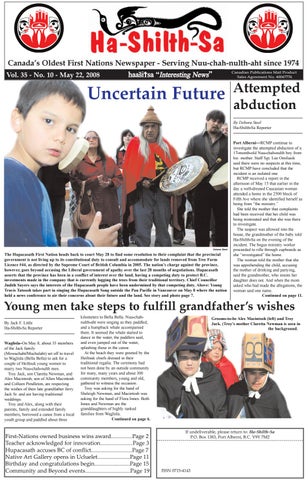 The Hupacasath First Nation heads back to court May 28 to find some resolution to their complaint that the provincial government is not living up to its constitutional duty to consult and accommodate for lands removed from Tree Farm Licence #44, as directed by the Supreme Court of British Columbia in 2005. The nation’s charge against the province, however, goes beyond accusing the Liberal government of apathy over the last 28 months of negotiations. Hupacasath asserts that the province has been in a conflict of interest over the land, having a competing duty to protect B.C. investments made in the company that is currently logging the trees from their traditional territory. Chief Councillor Judith Sayers says the interests of the Hupacasath people have been undermined by that competing duty. Above: Young Travis Tatoosh takes part in singing the Hupacasath Song outside the Pan Pacific in Vancouver on May 8 where the nation held a news conference to air their concerns about their future and the land. See story and photo page 7.

Port Alberni—RCMP continue to investigate the attempted abduction of a 17-month-old Nuu-chah-nulth boy from his mother. Staff Sgt. Lee Omilusik said there were no suspects at this time, but RCMP have concluded that the incident is an isolated one RCMP received a report in the afternoon of May 15 that earlier in the day a well-dressed Caucasian woman attended a home in the 2500 block of Fifth Ave where she identified herself as being from “the ministry.” She told the mother that complaints had been received that her child was being mistreated and that she was there to investigate. The suspect was allowed into the house, the grandmother of the baby told Ha-Shilth-Sa on the evening of the incident. The bogus ministry worker proceeded to rifle through cupboards as she “investigated” the home. The woman told the mother that she was apprehending the child, accusing the mother of drinking and partying, said the grandmother, who insists her daughter does not. And when the mom asked who had made the allegations, the woman said one name. Continued on page 11.

Young men take steps to fulfill grandfather’s wishes By Jack F. Little Ha-Shilth-Sa Reporter Waglisla–On May 8, about 35 members of the Jack family (Mowachaht/Muchalaht) set off to travel to Waglisla (Bella Bella) to ask for a couple of Heiltsuk young women to marry two Nuu-chah-nulth men. Troy Jack, son Claretta Newman, and Alex Macintosh, son of Allen Macintosh and Colleen Pendleton, are respecting the wishes of their late grandfather Jerry Jack Sr. and are having traditional weddings. Troy and Alex, along with their parents, family and extended family members, borrowed a canoe from a local youth group and paddled about three

kilometers to Bella Bella. Nuu-chahnulth-aht were singing as they paddled, and a humpback whale accompanied them. It seemed the whale started to dance in the water, the paddlers said, and even jumped out of the water, splashing those in the canoe. At the beach they were greeted by the Heiltsuk chiefs dressed in their traditional regalia. The ceremony had not been done by an outside community for many, many years and about 300 community members, young and old, gathered to witness the occasion. Troy was asking for the hand of Sheleigh Newman, and Macintosh was asking for the hand of Flora Innes. Both Innes and Newman are the granddaughters of highly ranked families from Waglisla. Continued on page 6.