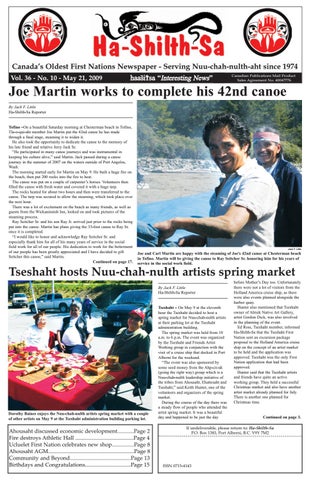 Tofino –On a beautiful Saturday morning at Chesterman beach in Tofino, Tla-o-qui-aht member Joe Martin put the 42nd canoe he has made through a final stage, steaming it to widen it. He also took the opportunity to dedicate the canoe to the memory of his late friend and relative Jerry Jack Sr. “He participated in many canoe journeys and was instrumental in keeping his culture alive,” said Martin. Jack passed during a canoe journey in the summer of 2007 on the waters outside of Port Angelos, Wash. The morning started early for Martin on May 9. He built a huge fire on the beach, then put 200 rocks into the fire to heat. The canoe was put on a couple of carpenter’s horses. Volunteers then filled the canoe with fresh water and covered it with a huge tarp. The rocks heated for about two hours and then were transferred to the canoe. The tarp was secured to allow the steaming, which took place over the next hour. There was a lot of excitement on the beach as many friends, as well as guests from the Wickaninnish Inn, looked on and took pictures of the steaming process. Ray Seitcher Sr. and his son Ray Jr. arrived just prior to the rocks being put into the canoe. Martin has plans giving the 33-foot canoe to Ray Sr. once it is completed. “I would like to honor and acknowledge Ray Seitcher Sr. and especially thank him for all of his many years of service in the social field work for all of our people. His dedication to work for the betterment of our people has been greatly appreciated and I have decided to gift Seitcher this canoe,” said Martin. Continued on page 17.

Joe and Carl Martin are happy with the steaming of Joe&#39;s 42nd canoe at Chesterman beach in Tofino. Martin will be giving the canoe to Ray Seitcher Sr. honoring him for his years of service in the social work field.

Dorothy Baines enjoys the Nuu-chah-nulth artists spring market with a couple of other artists on May 9 at the Tseshaht administration building parking lot.

Tseshaht – On May 9 at the eleventh hour the Tseshaht decided to host a spring market for Nuu-chah-nulth artists at their parking lot at the Tseshaht administration building. The spring market was held from 10 a.m. to 6 p.m. The event was organized by the Tseshaht and Friends Artist Working group in conjunction with the visit of a cruise ship that docked in Port Alberni for the weekend. “The event was also sponsored by some seed money from the Ahp-cii-uk (going the right way) group which is a Nuu-chah-nulth leadership initiative of the tribes from Ahousaht, Ehattesaht and Tseshaht,” said Keith Hunter, one of the volunteers and organizers of the spring market. During the course of the day there was a steady flow of people who attended the artist spring market. It was a beautiful day and happened to be just the day

before Mother’s Day too. Unfortunately there were not a lot of visitors from the Holland America cruise ship, as there were also events planned alongside the harbor quay. Hunter also mentioned that Tseshaht owner of Ahtsik Native Art Gallery, artist Gordon Dick, was also involved in the planning of the event. Ed Ross, Tseshaht member, informed Ha-Shilth-Sa that the Tseshaht First Nation sent an excursion package proposal to the Holland America cruise ship on the concept of an artist market to be held and the application was approved. Tseshaht was the only First Nation application that had been approved. Hunter said that the Tseshaht artists and friends have quite an active working group. They held a successful Christmas market and also have another artist market already planned for July. There is another one planned for Christmas time.