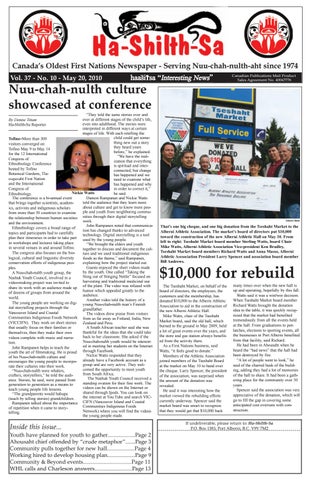 “They told the same stories over and over at different stages of the child’s life, even into adulthood. The stories were interpreted in different ways at certain stages of life. With each retelling the child could get someTofino–More than 300 thing new out a story visitors converged on they heard years Tofino May 9 to May 14 before,” he explained. for the 12 International “We have the realCongress of ization that everything Ethnobiology Conference is spiritual and interhosted by Tofino connected, but change Botanical Gardens, Tlahas happened and we o-qui-aht First Nation need to examine what and the International has happened and why Congress of in order to correct it,” Nickie Watts he said. Ethnobiology. The conference is a bi-annual event Damon Rampanan and Nickie Watts told the audience that they learn more that brings together scientists, academabout culture and get to know more peoics, activists and indigenous scholars ple and youth from neighboring commufrom more than 50 countries to examine the relationship between human societies nities through their digital storytelling work. and the environment. John Rampanen noted that communicaEthnobiology covers a broad range of tion has changed thanks to advanced topics and participants had to carefully technology. Digital storytelling is a tool plan their itineraries in order to take part used by the young people. in workshops and lectures taking place “We brought the elders and youth in several venues in and around Tofino. together to discuss and document the culThe congress also focuses on the bioture and we used traditional indigenous logical, cultural and linguistic diversity foods as the theme,” said Rampanen, conservation efforts of indigenous peoexplaining how the project started out. Guests enjoyed the short videos made ples. by the youth. One called “Taking the A Nuu-chah-nulth youth group, the Sting out of Stinging Nettle” focused on Nashuk Youth Council, involved in a harvesting and traditional medicinal use video-making project was invited to share its work with an audience made up of the plant. The video was infused with humor which appealed greatly to the of dozens of groups from around the audience. world. Another video told the history of a The young people are working on dig- young Nuu-chah-nulth man’s Finnish ital storytelling projects through the grandfather. Vancouver Island and Coastal The videos drew praise from visitors Communities Indigenous Foods Network from as far away as Finland, India, New (VICCIFN). They work on short stories Zealand and Peru. that usually focus on their families or A South African teacher said she was thankful for the ideas that she could take themselves, then they make their own back to her classroom. She asked if the videos complete with music and narraNuu-chah-nulth youth would be interesttion. ed in meeting her students on the Internet John Rampanen helps to teach the youth the art of filmmaking. He is proud through Facebook. Nickie Watts responded that they of his Nuu-chah-nulth culture and already have a Facebook account as a encourages the young people to incorpogroup and are very active. They welrate their cultures into their work. comed the opportunity to meet youth “Nuu-chah-nulth were whalers, from South Africa. crafters, storytellers,” he told the audiThe Nashuk Youth Council received a ence. Stories, he said, were passed from standing ovation for their fine work. The generation to generation as a means to videos can be shown on the Internet or teach young people life lessons. shared through Ipods. You can look on “The grandparents would hahupa the internet at You Tube and search VIC(teach by telling stories) grandchildren. Rampanen talked about the importance CIFN (Vancouver Island and Coastal Communities Indigenous Foods of repetition when it came to storyNetwork) where you will find the videos telling. the young people made. By Denise Titian Ha-Shilth-Sa Reporter

$10,000 for rebuild The Tseshaht Market, on behalf of the board of directors, the employees, the customers and the membership, has donated $10,000 to the Alberni Athletic Association to aid in the construction of the new Alberni Athletic Hall. Mike Watts, chair of the Tseshaht Market board, said the old hall, which burned to the ground in May 2009, held a lot of great events over the years, and the store and gas station always benefited from the activity there. As a First Nations business, said Watts, “it feels good to donate.” Members of the Athletic Association joined members of the Tseshaht Board at the market on May 10 to hand over the cheque. Larry Spencer, the president of the association, was surprised when the amount of the donation was revealed. He said it was interesting how the market viewed the rebuilding efforts currently underway. Spencer said the market board was smart to recognize that they would get that $10,000 back

many times over when the new hall is up and operating, hopefully by this fall. Watts said it was a win/win decision. When Tseshaht Market board member Richard Watts brought the donation idea to the table, it was quickly recognized that the market had benefited tremendously from all the events held at the hall. From graduations to potlatches, elections to sporting events, all the businesses in Port Alberni benefited from that facility, said Richard. He had been in Ahousaht when he heard the “bad news” that the hall had been destroyed by fire. “A lot of people went to look,” he said of the charred husk of the building, adding they had a lot of memories of the hall to share. It had been a gathering place for the community over 50 years. Spencer said the association was very appreciative of the donation, which will go to fill the gap in covering some anticipated cost overruns with construction.