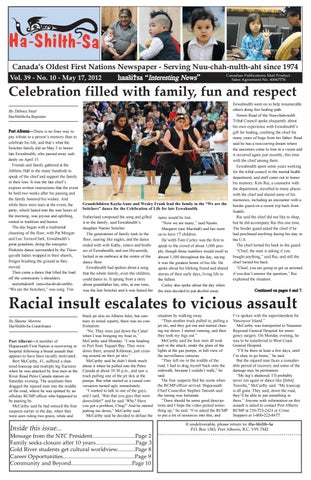 Celebration filled with family, fun and respect By Debora Steel Ha-Shilth-Sa Reporter Port Alberni—There is no finer way to pay tribute to a person’s memory than to celebrate his life, and that’s what the Seitcher family did on May 5 to honor late Eewahnulth, who passed away suddenly on April 15. Friends and family gathered at the Athletic Hall in the many hundreds to speak of the chief and support the family in their loss. It was the late chief’s express written instructions that the event be held two weeks after his passing and the family honored his wishes. And while there were tears at the event, the party, which lasted into the wee hours of the morning, was joyous and uplifting, rooted in tradition and humor. The day began with a traditional cleansing of the floor, with Pat Morgan and Leo Torres-Clark, Eewahnulth’s great grandson, doing the energetic Hinkeets dance surrounded by the Tla-oqui-aht ladies wrapped in their shawls, fringes brushing the ground as they moved. Then came a dance that lifted the load off the community’s shoulders. seec^as^takim&gt; (see-cha-sh-ak-imlth). “We are the Seitchers,” was sung. Tim

Grandchildren Kayla-Anne and Wesley Frank lead the family in the “We are the Seitchers” dance for the Celebration of Life for late Eewahnulth. Sutherland composed the song and gifted it to the family, said Eewahnulth’s daughter Naomi Seitcher. The generations of family took to the floor, soaring like eagles, and the dance ended with wife Kathy, sisters and brothers of Eewahnulth, and son Hiyuuwii=h=, locked in an embrace at the centre of the dance floor. Eewahnulth had spoken about a song that the whole family, even the children, could dance to. It sprang from a story about grandfather Ian, who, at one time, was the last Seitcher and it was feared the

name would be lost. “Now we are many,” said Naomi. Margaret (nee Marshall) and Ian went on to have 17 children. Ha’wilth Tom Curley was the first to speak to the crowd of about 1,000 people, though those numbers would swell to almost 1,500 throughout the day, saying it was the greatest honor of his life. He spoke about his lifelong friend and shared stories of their early days, living life to the fullest. Curley also spoke about the day when the men decided to put alcohol away.

Eewahnulth went on to help innumerable others along this healing path. Simon Read of the Nuu-chah-nulth Tribal Council spoke eloquently about his own experience with Eewahnulth’s gift for healing, crediting the chief for many years of hugs from his father. Read said he has a reoccurring dream where the ancestors come to him in a vision and it occurred again just recently, this time with the chief among them. Eewahnulth spent some years working for the tribal council in the mental health department, and staff came out to honor his memory. Kim Rai, a counselor with the department, travelled to many places with the chief and shared some of his memories, including an encounter with a border guard on a recent trip back from Seattle. Rai said the chief did not like to shop, but he did accompany Rai this one time. The border guard asked the chief if he had purchased anything during his stay in the U.S. The chief turned his back to the guard. “Chief, the man is asking if you bought anything,” said Rai, and still the chief turned his back. “Chief, you are going to get us arrested if you don’t answer the question,” Rai explained the situation. Continued on pages 6 and 7.

Racial insult escalates to vicious assault By Shayne Morrow Ha-Shilth-Sa Contributor Port Alberni—A member of Hupacasath First Nation is recovering in hospital following a brutal assault that appears to have been racially motivated. Bert McCarthy, 41, suffered a shattered kneecap and multiple leg fractures when he was attacked by four men at the River Road Petro Canada station on Saturday evening. The assailants then dragged the injured man into the middle of the road, where he was spotted by an off-duty RCMP officer who happened to be passing by. McCarthy said he had noticed the four suspects earlier in the day, when they were seen riding two green, white and

black jet skis on Alberni Inlet, but contrary to initial reports, there was no confrontation. “No. They were just down the Canal when I was bringing my boat in,” McCarthy said Monday. “I was heading to Port from Toquart Bay. They were down there, around Kildonan, just cruising around on their jet skis.” McCarthy said he didn’t think much about it when he pulled into the Petro Canada at about 10:30 p.m., and saw a truck pulling one of the jet skis at the pumps. But what started as a casual conversation turned ugly immediately. “I wanted to talk to one of the guys, and I said, ‘Was that you guys that were down-Inlet?’ and he said ‘Why? Have you got a problem, Chug?’ And he started putting me down,” McCarthy said. McCarthy said he decided to defuse the

situation by walking away. “Then another truck pulled in, pulling a jet ski, and they got out and started chasing me down. I started running, and then they took my legs out.” McCarthy said the four men all took part in the attack, under the glare of the lights at the gas pumps, in full view of the surveillance cameras. “They left me in the middle of the road. I had to drag myself back onto the sidewalk, because I couldn’t walk,” he said. The four suspects fled the scene when the RCMP officer arrived. Hupacasath Chief Councillor Stephen Tatoosh said the timing was fortunate. “There should be some good descriptions and I hope the video picked something up,” he said. “I’ve asked the RCMP to put a lot of resources into this, and

I’ve spoken with the superintendent for Vancouver Island.” McCarthy was transported to Nanaimo Regional General Hospital for emergency surgery. On Monday evening, he was to be transferred to West Coast General Hospital. “I’ll be there at least a few days, until I’m okay to go home,” he said. But the injured man faces a considerable period of recovery and some of the damage may be permanent. “My leg’s shattered. I’ll probably never run again or dance like [John] Travolta,” McCarthy said. “My kneecap is all gone. They said, down the road, they’ll be able to put something in there.” Anyone with information on this assault is asked to contact Port Alberni RCMP at 250-723-2424 or Crime Stoppers at 1-800-222-8477.