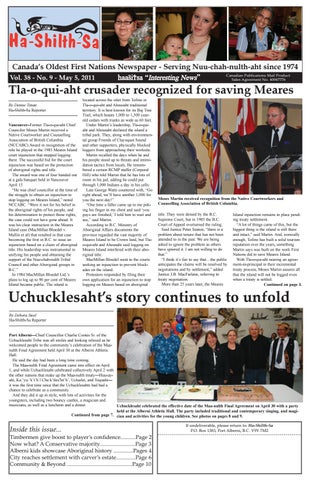 Tla-o-qui-aht crusader recognized for saving Meares By Denise Titian Ha-Shilth-Sa Reporter Vancouver–Former Tla-o-qui-aht Chief Councilor Moses Martin received a Native Courtworker and Counselling Association of British Columbia (NCCABC) Award in recognition of the role he played in the 1985 Meares Island court injunction that stopped logging there. The successful bid for the court injunction was based on the protection of aboriginal rights and title. The award was one of four handed out at a gala banquet held in Vancouver April 15 “He was chief councillor at the time of the struggle to obtain an injunction to stop logging on Meares Island,” noted NCCABC. “Were it not for his belief in the aboriginal rights of his people, and his determination to protect those rights, the case could not have gone ahead. It was his clear instruction in the Meares Island case (MacMillan Bloedel v. Mullin et al) that resulted in that case becoming the first in B.C. to issue an injunction based on a claim of aboriginal title. His leadership was instrumental in unifying his people and obtaining the support of the Nuu-chah-nulth Tribal Council and other Aboriginal groups in B.C.” In 1984 MacMillan Bloedel Ltd.’s plans to log up to 90 per cent of Meares Island became public. The island is

located across the inlet from Tofino in Tla-o-qui-aht and Ahousaht traditional territory. It is best known for its Big Tree Trail, which boasts 1,000 to 1,500 yearold cedars with trunks as wide as 60 feet. Under Martin’s leadership, Tla-o-quiaht and Ahousaht declared the island a tribal park. They, along with environmental group Friends of Clayoquot Sound and other supporters, physically blocked loggers from approaching their worksite. Martin recalled the days when he and his people stood up to threats and intimidation tactics from locals. He remembered a certain RCMP staffer (Corporal Hill) who told Martin that he has lots of room in his jail, adding he could put through 1,000 Indians a day in his cells. Late George Watts countered with, “Go right ahead, we’ll have another 1,000 for you the next day!” “One time a faller came up to me poking his finger in my chest and said ‘you guys are finished;’ I told him to wait and see,” said Martin. According to B.C. Ministry of Aboriginal Affairs documents the province regarded the vast majority of Meares Island to be Crown land, but Tlao-qui-aht and Ahousaht said logging on Meares Island interfered with their aboriginal title. MacMillan Bloedel went to the courts seeking an injunction to prevent blockades on the island. Protestors responded by filing their own application for an injunction to stop logging on Meares based on aboriginal

Moses Martin received recognition from the Native Courtworkers and Counselling Association of British Columbia. title. They were denied by the B.C. Supreme Court, but in 1985 the B.C. Court of Appeal overturned the ruling. Said Justice Peter Seaton, “there is a problem about tenure that has not been attended to in the past. We are being asked to ignore the problem as others have ignored it. I am not willing to do that.” “I think it’s fair to say that…the public anticipates the claims will be resolved by negotiations and by settlement,” added Justice J.B. MacFarlane, referring to treaty negotiation. More than 25 years later, the Meares

Island injunction remains in place pending treaty settlement. “A lot of things came of this, but the biggest thing is the island is still there and intact,” said Martin. And, ironically enough, Tofino has built a solid tourism reputation over the years, something Martin says was built on the work First Nations did to save Meares Island. With Tla-o-qui-aht nearing an agreement-in-principal in their incremental treaty process, Moses Martin assures all that the island will not be logged even when a treaty is settled. Continued on page 3.

Uchucklesaht’s story continues to unfold By Debora Steel Ha-Shilth-Sa Reporter Port Alberni—Chief Councillor Charlie Cootes Sr. of the Uchucklesaht Tribe was all smiles and looking relaxed as he welcomed people to the community’s celebration of the Maanulth Final Agreement held April 30 at the Alberni Athletic Hall. He said the day had been a long time coming. The Maa-nulth Final Agreement came into effect on April 1, and while Uchucklesaht celebrated collectively April 2 with the other nations that make up the Maa-nulth treaty—Huu-ayaht, Ka:’yu:’k’t’h’/ Che:k’tles7et’h’, Ucluelet, and Toquaht— it was the first time since that the Uchucklesahts had had a chance to celebrate as a community. And they did it up in style, with lots of activities for the youngsters, including two bouncy castles, a magician and musicians, as well as a luncheon and a dinner. Uchucklesaht celebrated the effective date of the Maa-nulth Final Agreement on April 30 with a party held at the Alberni Athletic Hall. The party included traditional and contemporary singing, and magiContinued from page 7. cian and activities for the young children. See photos on pages 8 and 9.