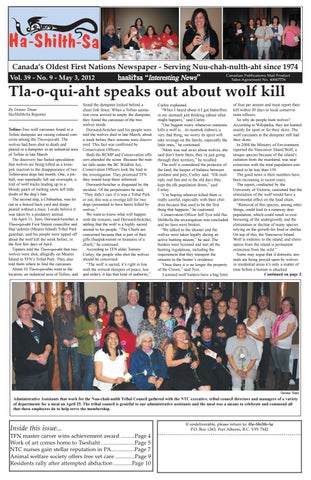 Tla-o-qui-aht speaks out about wolf kill By Denise Titian Ha-Shilth-Sa Reporter Tofino–Two wolf carcasses found in a Tofino dumpster are raising cultural concerns among the Tla-o-qui-aht. The wolves had been shot to death and placed in a dumpster in an industrial area of Tofino in late March. The discovery has fueled speculation that wolves are being killed as a kneejerk reaction to the disappearance of two Tofino-area dogs last month. One, a pitbull, was reportedly left out overnight; a trail of wolf tracks leading up to a bloody patch of melting snow left little doubt of the dog’s fate. The second dog, a Chihuahua, was let out in a fenced back yard and disappeared without a trace. Locals believe it was taken by a predatory animal. On April 11, Terry Dorward-Seitcher, a Tla-o-qui-aht First Nation councillor and Haa’uukmin (Meares Island) Tribal Park guardian, said his people were tipped off about the wolf kill the week before, in the first few days of April. Tipsters told the Tla-o-qui-aht that two wolves were shot, allegedly on Meares Island in TFN’s Tribal Park. They also told them where to find the carcasses. About 10 Tla-o-qui-ahts went to the location, an industrial area of Tofino, and

found the dumpster locked behind a chain link fence. When a Tofino sanitation crew arrived to empty the dumpster, they found the carcasses of the two wolves inside. Dorward-Seitcher said his people were told the wolves died in late March, about a week before their remains were discovered. This fact was confirmed by Conservation Officers. Both the RCMP and Conservation officers attended the scene. Because the matter falls under the BC Wildlife Act, Conservation Officers took the lead in the investigation. They promised TFN they would keep them informed. Dorward-Seitcher is disgusted by the incident. Of the perpetrators he said, “They didn’t care if it was a Tribal Park or not; this was a revenge kill for two dogs (presumed to have been) killed by wolves.” We want to know what will happen with the remains, said Dorward-Seitcher, adding that the wolf is a highly sacred animal to his people. “The Chiefs are concerned because that is part of their gifts (huupukwanim or treasures of a chief),” he continued. According to TFN elder Tommy Curley, the people who shot the wolves should be concerned. “The wolf is sacred, it’s right in line with the witwok (keepers of peace, law and order); it has that kind of authority,”

Curley explained. “When I heard about it I got butterflies in my stomach just thinking (about what might happen),” said Curley. “Our biggest worry whenever someone kills a wolf is…its nuumok (taboo), a very bad thing; we worry its spirit will take revenge on the family, especially the little ones,” he continued. “Mom was real strict about wolves; she said don’t harm them, they’re just going through their territory,” he recalled. The wolf is considered the protector of the land, the keeper of balance between predator and prey, Curley said. “Elk multiply real fast and in the old days they kept the elk population down,” said Curley. “I’m hoping whoever killed them is really careful, especially with their children because that used to be the first thing that happens,” he cautioned. Conservation Officer Jeff Tyre told HaShilth-Sa the investigation was concluded and no laws were broken. “We talked to the shooter and the wolves were taken legally during an active hunting season,” he said. The hunters were licensed and met all the hunting regulations, including the requirement that they transport the remains to the hunter’s residence. “Once there it is no longer the property of the Crown,” said Tyre. Licensed wolf hunters have a bag limit

of four per annum and must report their kill within 30 days to local conservations officers. So why do people hunt wolves? According to Wikipedia, they are hunted mainly for sport or for their skins. The wolf carcasses in the dumpster still had their skins. In 2008 the Ministry of Environment reported the Vancouver Island Wolf, a unique species because of the island’s isolation from the mainland, was near extinction with the total population estimated to be less than 150. The good news is their numbers have been increasing in recent years. The report, conducted by the University of Victoria, cautioned that the elimination of the wolf would have a detrimental effect on the food chain. “Removal of this species, among other things, could lead to a runaway deer population, which could result in over browsing of the undergrowth, and the elimination or decline of many species relying on the growth for food or shelter. On top of this, the Vancouver Island Wolf is endemic to the island, and elimination from the island is permanent extinction from the wild.” Some may argue that if domestic animals are being preyed upon by wolves in residential areas it’s only a matter of time before a human is attacked. Continued on page 3.

Administrative Assistants that work for the Nuu-chah-nulth Tribal Council gathered with the NTC executive, tribal council directors and managers of a variety of departments for a meal on April 25. The tribal council is grateful to our administrative assistants and the meal was a means to celebrate and commend all that these employees do to help serve the membership.