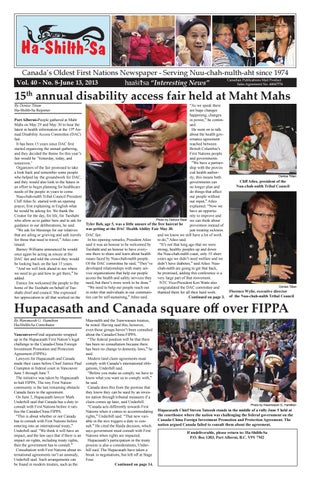 15th annual disability access fair held at Maht Mahs By Denise Titian Ha-Shilth-Sa Reporter Port Alberni–People gathered at Maht Mahs on May 29 and May 30 to hear the latest in health information at the 15th Annual Disability Access Committee (DAC) fair. It has been 15 years since DAC first started organizing the annual gathering, and they decided the theme for this year’s fair would be ‘Yesterday, today, and tomorrow.’ Organizers of the fair promised to take a look back and remember some people who helped lay the groundwork for DAC, and they would also look to the future in an effort to begin planning for healthcare needs of the people in years to come. Nuu-chah-nulth Tribal Council President Cliff Atleo Sr. started with an opening prayer, first explaining in English what he would be asking for. We thank the Creator for the day, for life, for Tseshaht who allow us to gather here and to ask for guidance in our deliberations, he said. “We ask for blessings for our relatives that are ailing or grieving and safe travels for those that need to travel,” Atleo continued. Barney Williams announced he would once again be acting as emcee at the DAC fair and told the crowd they would be looking back on the last 15 years. “And we will look ahead to see where we need to go and how to get there,” he added. Eunice Joe welcomed the people to the home of the Tseshaht on behalf of Tseshaht chief and council. She expressed her appreciation to all that worked on the

“As we speak there are huge changes happening; changes in power,” he continued. He went on to talk about the health governance agreement reached between British Columbia’s First Nations people and governments. “We have a partnership with the provincial health authority; this means both governments can no longer plan and do things that affect our people without our input,” Atleo explained. “Now we have an opportunity to improve and Photo by Debora Steel we can think about Tyler Bob, age 5, was a little unsure of the free haircut he prevention instead of was getting at the DAC Health Ability Fair May 30. just treating sickness and we know we still have a lot of work DAC fair. to do,” Atleo said. In his opening remarks, President Atleo “It’s not that long ago that we were said it was an honour to be welcomed by strong, healthy peoples up and down Tseshaht and an honour to have everythe Nuu-chah-nulth coast; only 55 short one there to share and learn about health years ago we didn’t need welfare and we issues faced by Nuu-chah-nulth people. Of the DAC committee he said, “They’ve didn’t have diabetes,” said Atleo. Nuuchah-nulth are going to get that back, developed relationships with many serhe promised, adding this conference is a vice organizations that help our people access the health and safety services they very large part of that movement. NTC Vice-President Ken Watts also need, but there’s more work to be done.” congratulated the DAC committee and “We need to help our people reach out in order that individuals in our communi- thanked them for all their hard work. Continued on page 3. ties can be self-sustaining,” Atleo said.

Hupacasath and Canada square oﬀ over FIPPA By Wawmeesh G. Hamilton Ha-Shilth-Sa Contributor Vancouver—Final arguments wrapped up in the Hupacasath First Nation’s legal challenge to the Canada-China Foreign Investment Promotion and Protection Agreement (FIPPA). Lawyers for Hupacasath and Canada made their cases before Chief Justice Paul Crampton in federal court in Vancouver June 5 through June 7. The initiative was taken by Hupacasath to halt FIPPA. The tiny First Nation community is the last remaining obstacle Canada faces to the agreement. On June 5, Hupacasath lawyer Mark Underhill said that Canada has a duty to consult with First Nations before it ratifies the Canada-China FIPPA. “This is about whether or not Canada has to consult with First Nations before entering into an international treaty,” Underhill said. “We think it will have an impact, and the law says that if there is an impact on rights, including treaty rights, then the government has to consult.” Consultation with First Nations about international agreements isn’t an anomaly, Underhill said. Such arrangements can be found in modern treaties, such as the

Maa-nulth and the Tsawwassen treaties, he noted. Having said this, however, even those groups haven’t been consulted about the Canada-China FIPPA. “The federal position will be that there has been no consultation because there has been no change to domestic laws,” he said. Modern land claim agreements must comply with Canada’s international obligations, Underhill said. “Before you make us comply we have to know what you want us to comply with,” he said. Canada does this from the premise that they know they can be sued by an investor nation through tribunal measures if a claim comes up later, said Underhill. “Canada acts differently towards First Nations when it comes to accommodating rights,” Underhill said. “That new variable in the mix triggers a duty to consult.” He cited the Haida decision, which says government must consult with First Nations when rights are impacted. Hupacasath’s participation in the treaty process is also a considerations, Underhill said. The Hupacasath have taken a break in negotiations, but left off at Stage Four. Continued on page 14.

Hupacasath Chief Steven Tatoosh stands in the middle of a rally June 5 held at the courthouse where the nation was challenging the federal government on the Canada-China Foreign Investment Promotion and Protection Agreement. The nation argued Canada failed to consult them about the agreement. If undeliverable, please return to: Ha-Shilth-Sa P.O. Box 1383, Port Alberni, B.C. V9Y 7M2