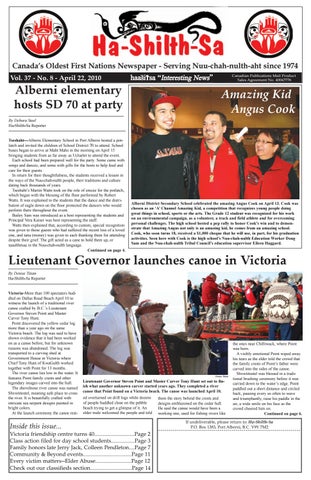 By Debora Steel Ha-Shilth-Sa Reporter Tseshaht—Alberni Elementary School in Port Alberni hosted a potlatch and invited the children of School District 70 to attend. School buses began to arrive at Maht Mahs in the morning on April 15 bringing students from as far away as Ucluelet to attend the event. Each school had been prepared well for the party. Some came with songs and dances, and some with gifts for the hosts to help feed and care for their guests. In return for their thoughtfulness, the students received a lesson in the ways of the Nuu-chah-nulth people, their traditions and culture dating back thousands of years. Tseshaht’s Martin Watts took on the role of emcee for the potlatch, which began with the blessing of the floor performed by Robert Watts. It was explained to the students that the dance and the distribution of eagle down on the floor protected the dancers who would perform there throughout the event. Bailey Sam was introduced as a host representing the students and Principal Vera Kaiser was host representing the staff. Watts then explained that, according to custom, special recognition was given to those guests who had suffered the recent loss of a loved one, and tana (money) was given to each thanking them for attending despite their grief. The gift acted as a cane to hold them up, or taaulthmaa in the Nuu-chah-nulth language. Continued on page 4.

Alberni District Secondary School celebrated the amazing Angus Cook on April 13. Cook was chosen as an ‘A’ Channel Amazing Kid, a competition that recognizes young people doing great things in school, sports or the arts. The Grade 12 student was recognized for his work on an environmental campaign, as a volunteer, a track and field athlete and for overcoming personal challenges. The high school hosted a pep rally to honor Cook’s win and to demonstrate that Amazing Angus not only is an amazing kid, he comes from an amazing school. Cook, who soon turns 18, received a $1,000 cheque that he will use, in part, for his graduation activities. Seen here with Cook is the high school’s Nuu-chah-nulth Education Worker Doug Sam and the Nuu-chah-nulth Tribal Council’s education supervisor Eileen Haggard.

Lieutenant Governor launches canoe in Victoria By Denise Titian Ha-Shilth-Sa Reporter Victoria–More than 100 spectators huddled on Dallas Road Beach April 10 to witness the launch of a traditional river canoe crafted by B.C.’s Lieutenant Governor Steven Point and Master Carver Tony Hunt. Point discovered the yellow cedar log more than a year ago on the same Victoria beach. The log was said to have shown evidence that it had been worked on as a canoe before, but for unknown reasons was abandoned. The log was transported to a carving shed at Government House in Victoria where Chief Tony Hunt of KwaGulth worked together with Point for 13 months. The river canoe lies low in the water. It features Point family crests and other legendary images carved into the hull. The shovelnose river canoe was named Shxwtitostel, meaning safe place to cross the river. It is beautifully crafted with intricate sea serpent designs painted in bright colors. At the launch ceremony the canoe rest-

Lieutenant Governor Steven Point and Master Carver Tony Hunt set out to finish what another unknown carver started years ago. They completed a river canoe that Point found on a Victoria beach. The canoe was launched April 10. ed overturned on drift logs while dozens of people huddled close on the pebble beach trying to get a glimpse of it. An elder male welcomed the people and told

them the story behind the crests and designs emblazoned on the cedar hull. He said the canoe would have been a working one, used for fishing rivers like

the ones near Chilliwack, where Point was born. A visibly emotional Point wiped away his tears as the elder told the crowd that the family crests of Point’s father were carved into the sides of the canoe. Shxwtitostel was blessed in a traditional brushing ceremony before it was carried down to the water’s edge. Point paddled out a short distance and circled back, pausing every so often to wave and triumphantly, raise his paddle in the air, a wide smile on his face as the crowd cheered him on. Continued on page 6.