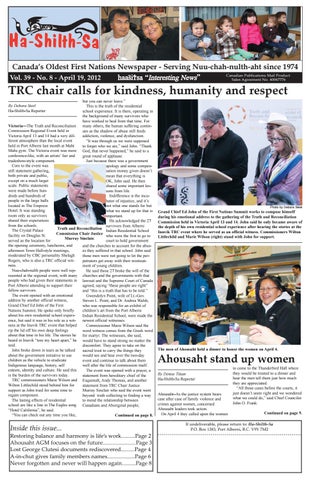 TRC chair calls for kindness, humanity and respect but you can never leave.” This is the truth of the residential school experience. It is there, operating in the background of many survivors who have worked to heal from that time. For Victoria—The Truth and Reconciliation many others, the human suffering continCommission Regional Event held in ues as the shadow of abuse still feeds Victoria April 13 and 14 had a very difaddiction, violence, and dysfunction. ferent atmosphere than the local event “It was through us we were supposed held in Port Alberni last month at Maht to forget who we are,” said John. “Thank Mahs gym. The Victoria event was more God, that never happened,” he said to a conference-like, with an artists’ fair and great round of applause. tradeshow-style component. Just because there was a government Core to the event was apology and some compenstill statement gathering, sation money given doesn’t both private and public, mean that everything is except on a much larger OK, John said. He then scale. Public statements shared some important leswere made before hunsons from life. dreds and hundreds of Indifference is the incupeople in the large halls bator of injustice, and it’s located in The Empress not what one stands for but Hotel. It was standing what we stand up for that is room only as survivors important. shared their experiences He acknowledged the 27 from the schools. survivors from Alberni Truth and Reconciliation The Crystal Palace Indian Residential School Commission Chair Justice facility on Douglas St. who were the first to go to Murray Sinclair. served as the location for court to hold government the opening ceremony, luncheons, and and the churches to account for the abusafternoon Town Hall-style meetings, es they suffered in that school. John said moderated by CBC personality Shelagh those men were not going to let the perRogers, who is also a TRC official witpetrators get away with their mistreatness. ment of young children. Nuu-chah-nulth people were well repHe said those 27 broke the will of the resented at the regional event, with many churches and the governments with that people who had given their statements in lawsuit and the Supreme Court of Canada Port Alberni attending to support their agreed, saying “these people are right” fellow survivors. and “this is a truth that has to be told.” The event opened with an emotional Gwendolyn Point, wife of Lt.-Gov. address by another official witness, Steven L. Point, and Dr. Andrea Walsh, Grand Chief Ed John of the First who was responsible for an exhibit of Nations Summit. He spoke only briefly children’s art from the Port Alberni about his own residential school experiIndian Residential School, were made the ence, but said it was in his role as a witnewest official witnesses. ness at the Inuvik TRC event that helped Commissioner Marie Wilson said the rip the lid off his own deep feelings word witness comes from the Greek word about that time in his life. The stories he for martyr. The witnesses, she said, heard in Inuvik “tore my heart apart,” he would have to stand strong no matter the said. discomfort. They agree to take on the John broke down in tears as he talked sacred trust to carry the things they about the government initiative to use would see and hear over the two-day children as the vehicle to eradicate event and continue to talk about them Indigenous language, history, self well after the life of commission itself. esteem, identity and culture. He said this The event was opened with a prayer, a is the burden of the survivors today. statement from hereditary chief of the TRC commissioners Marie Wilson and Esquimalt, Andy Thomas, and another Wilton Littlechild stood behind him for statement from TRC Chair Justice support as John tried for some time to Murray Sinclair who said the event went regain composure. beyond truth collecting to finding a way The lasting effects of residential to mend the relationship between school are like a line in The Eagles song Canadians and Aboriginal people; “Hotel California”, he said. “You can check out any time you like, Continued on page 8. By Debora Steel Ha-Shilth-Sa Reporter

Grand Chief Ed John of the First Nations Summit works to compose himself during his emotional address to the gathering of the Truth and Reconciliation Commission held in Victoria April 13 and 14. John said he only became aware of the depth of his own residential school experience after hearing the stories at the Inuvik TRC event where he served as an official witness. Commissioners Wilton Littlechild and Marie Wilson (right) stand with John for support.

The men of Ahousaht held a dinner to honor the women on April 4.

Ahousaht stand up women By Denise Titian Ha-Shilth-Sa Reporter Ahousaht–As the justice system hears case after case of family violence and crimes against women, concerned Ahousaht leaders took action. On April 4 they called upon the women

to come to the Thunderbird Hall where they would be treated to a dinner and hear the men tell them just how much they are appreciated. “All those cases before the courts, it just doesn’t seem right and we wondered what we could do,” said Chief Councilor John O. Frank. Continued on page 9.