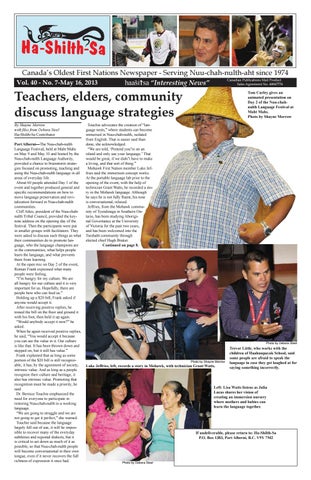 Teachers, elders, community discuss language strategies By Shayne Morrow with files from Debora Steel Ha-Shilth-Sa Contributor Port Alberni—The Nuu-chah-nulth Language Festival, held at Maht Mahs on May 9 and May 10 and hosted by the Nuu-chah-nulth Language Authority, provided a chance to brainstorm strategies focused on promoting, teaching and using the Nuu-chah-nulth language in all areas of everyday life. About 60 people attended Day 1 of the event and together produced general and specific recommendations on how to move language preservation and revitalization forward in Nuu-chah-nulth communities. Cliff Atleo, president of the Nuu-chahnulth Tribal Council, provided the keynote address on the opening day of the festival. Then the participants were put in smaller groups with facilitators. They were asked to discuss such things as what their communities do to promote language, who the language champions are in the communities, what helps people learn the language, and what prevents them from learning. At the open mic on Day 2 of the event, Roman Frank expressed what many people were feeling. “I’m hungry for my culture. We are all hungry for our culture and it is very important for us. Hopefully, there are people here who can feed us.” Holding up a $20 bill, Frank asked if anyone would accept it. After receiving positive replies, he tossed the bill on the floor and ground it with his foot, then held it up again. “Would anybody accept it now?” he asked. When he again received positive replies, he said, “You would accept it because you can see the value in it. Our culture is like that. It has been thrown down and stepped on, but it still has value.” Frank explained that as long as some portion of the $20 bill is still recognizable, it has, by the agreement of society, intrinsic value. And as long as a people recognize their culture and heritage, it also has intrinsic value. Promoting that recognition must be made a priority, he said. Dr. Bernice Touchie emphasized the need for everyone to participate in restoring Nuu-chah-nulth to a working language. “We are going to struggle and we are not going to get it perfect,” she warned. Touchie said because the language largely fell out of use, it will be impossible to recover many of the everyday subtleties and regional dialects, but it is critical to set down as much of it as possible, so that Nuu-chah-nulth people will become conversational in their own tongue, even if it never recovers the full richness of expression it once had.

Touchie advocates the creation of “language nests,” where students can become immersed in Nuu-chah-nulth, isolated from English. That is easier said than done, she acknowledged. “We are told, ‘Pretend you’re on an island and only use your language.’ That would be great, if we didn’t have to make a living, and that sort of thing.” Mohawk First Nation member Luke Jeffries said the immersion concept works. At the portable language lab prior to the opening of the event, with the help of technician Grant Watts, he recorded a story in the Mohawk language. Although he says he is not fully fluent, his tone is conversational, relaxed. Jeffries, from the Mohawk community of Tyendinaga in Southern Ontario, has been studying Aboriginal Governance at the University of Victoria for the past two years, and has been welcomed into the Tseshaht community through elected chief Hugh Braker. Continued on page 8.

Trevor Little, who works with the children of Haahuupayak School, said some people are afraid to speak the language in case they get laughed at for saying something incorrectly.

Left: Lisa Watts listens as Julia Lucas shares her vision of creating an immersion nursery where mothers and babies can learn the language together.