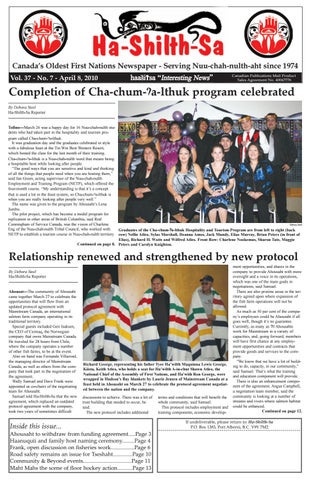 Completion of Cha-chum-%%a-lthuk program celebrated By Debora Steel Ha-Shilth-Sa Reporter Tofino—March 26 was a happy day for 16 Nuu-chah-nulth students who had taken part in the hospitality and tourism program called Cha-chum-%a-lthuk. It was graduation day and the graduates celebrated in style with a fabulous feast at the Tin Win Best Western Resort, which hosted the class for the last month of their training. Cha-chum-%a-lthuk is a Nuu-chah-nulth word that means being a hospitable host while looking after people. “The good ways that you are sensitive and kind and thinking of all the things that people need when you are hosting them,” said Jan Green, acting supervisor of the Nuu-chah-nulth Employment and Training Program (NETP), which offered the four-month course. “My understanding is that it’s a concept that is used a lot in the feast system, so Cha-chum-%a-lthuk is when you are really looking after people very well.” The name was given to the program by Ahousaht’s Lena Jumbo. The pilot project, which has become a model program for replication in other areas of British Columbia, said Rod Debora Steel Cunningham of Service Canada, was the vision of Charlene Eng of the Nuu-chah-nulth Tribal Council, who worked with Graduates of the Cha-chum-%a-lthuk Hospitality and Tourism Program are from left to right (back NETP to establish a tourism course in Nuu-chah-nulth territory row) Nellie Atleo, Sylas Marshall, Deanna Amos, Jack Mundy, Elias Murray, Brian Peters (in front of Elias), Richard H. Watts and Wilfred Atleo. Front Row: Charlene Nookemus, Sharon Tate, Maggie Continued on page 8. Peters and Carolyn Knighton.

Relationship renewed and strengthened by new protocol By Debora Steel Ha-Shilth-Sa Reporter Ahousat—The community of Ahousaht came together March 27 to celebrate the opportunities that will flow from an updated protocol agreement with Mainstream Canada, an international salmon farm company operating in its traditional territory. Special guests included Geir Isaksen, the CEO of Cermaq, the Norwegian company that owns Mainstream Canada. He traveled for 28 hours from Chile, where the company operates a number of other fish farms, to be at the event. Also on hand was Fernando Villarroel, the managing director of Mainstream Canada, as well as others from the company that took part in the negotiation of the agreement. Wally Samuel and Dave Frank were appointed as co-chairs of the negotiating team for Ahousaht. Samuel told Ha-Shilth-Sa that the new agreement, which replaced an outdated protocol agreement with the company, took two years of sometimes difficult

Richard George, representing his father Tyee Ha’wilth Maquinna Lewis George, Kiista, Keith Atleo, who holds a seat for Ha’wilth A-in-chut Shawn Atleo, the National Chief of the Assembly of First Nations, and Ha’wiih Ron George, were wrapped in Hudson’s Bay blankets by Laurie Jensen of Mainstream Canada at a feast held in Ahousaht on March 27 to celebrate the protocol agreement negotiated between the nation and the company. discussions to achieve. There was a lot of trust building that needed to occur, he said. The new protocol includes additional

terms and conditions that will benefit the whole community, said Samuel. This protocol includes employment and training components, economic develop-

ment opportunities, and shares in the company to provide Ahousaht with more oversight and a voice in its operations, which was one of the main goals in negotiations, said Samuel. There are also pristine areas in the territory agreed upon where expansion of the fish farm operations will not be allowed. As much as 50 per cent of the company’s employees could be Ahousaht if all goes well, though it’s no guarantee. Currently, as many as 70 Ahousahts work for Mainstream in a variety of capacities, and, going forward, members will have first chance at any employment opportunities and contracts that provide goods and services to the company. “We know that we have a lot of building to do, capacity, in our community,” said Samuel. That’s what the training and education component will provide. There is also an enhancement component of the agreement. Angus Campbell, a negotiation team member, said the community is looking at a number of streams and rivers where salmon habitat could be enhanced. Continued on page 12.