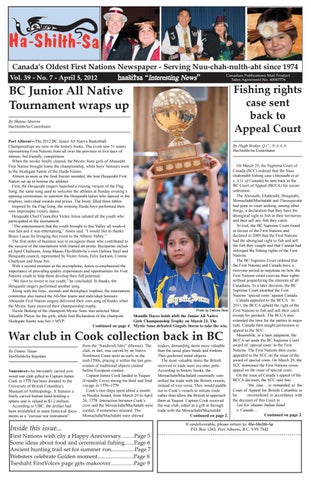 BC Junior All Native Tournament wraps up By Shayne Morrow Ha-Shilth-Sa Contributor Port Alberni—The 2012 BC Junior All Native Basketball Championships are now in the history books. The event saw 51 teams representing First Nations from all over the province in five days of intense, but friendly, competition. When the smoke finally cleared, the Mystic Sunz girls of Ahousaht First Nation brought home the championship, while boys’ honours went to the Skidegate Saints of the Haida Nation. Almost as soon as the final buzzer sounded, the host Hesquiaht First Nation set up to honour the athletes. First, the Hesquiaht singers launched a rousing version of the Flag Song, the same song used to welcome the athletes at Sunday evening’s opening ceremonies, to summon the Hesquiaht ladies who danced in the trophies, individual awards and prizes. The booty filled three tables. Inspired by the Flag Song, the winning Haida boys performed their own impromptu victory dance. Hesquiaht Chief Councillor Victor Amos saluted all the youth who participated in the tournament. “The entertainment that the youth brought to this Valley all week–it was fast and it was entertaining,” Amos said. “I would like to thanks Bruce Lucas for bringing this event to the Alberni Valley.” The first order of business was to recognize those who contributed to the success of the tournament with framed art prints. Recipients included April Charleson, Anna Masso, Ha-Shilth-Sa’s own Debora Steel and Hesquiaht council, represented by Victor Amos, Felix Jackson, Connie Charleson and Jesse Jim. With a second moment at the microphone, Amos re-emphasized the importance of providing quality experiences and opportunities for First Nations youth to help them develop their full potential. “We have to invest in our youth,” he concluded. In thanks, the Hesquiaht singers performed another song. Along with the first-, second- and third-place trophies, the tournament committee also named the All-Star teams and individual honours. Ahousaht First Nation singers delivered their own song of thanks when the Mystic Sunz received their championship trophy. Photo by Debora Steel Nicole Botting of the champion Mystic Sunz was selected Most Valuable Player for the girls, while Joel Richardson of the champion Shanille Hayes holds aloft the Junior All Native Skidegate Saints was boy’s MVP. Girls Championship Trophy on March 23. The Continued on page 4. Mystic Sunz defeated Gingolx Storm to take the win.

War club in Cook collection back in BC By Denise Titian Ha-Shilth-Sa Reporter Vancouver–An intricately carved yew wood war club gifted to Captain James Cook in 1778 has been donated to the University of British Columbia’s Museum of Anthropology. It features a finely carved human hand holding a sphere and is valued at $1.2 million. According to UBC, the artifact had been mislabeled in some historical documents as a “curious war instrument”

from the “Sandwich Isles” (Hawaii). The club, in fact, was carved by an Native Northwest Coast artist as early as the mid-1700s, placing it within the last generation of traditional objects created before European contact. Captain James Cook landed in Yuquot (Friendly Cove) during his third and final voyage in 1776–1779. Cook’s two ships spent about a month in Nootka Sound, from March 29 to April 26, 1778. Interaction between Cook’s crew and the Mowachaht/Muchalaht were cordial, if sometimes strained. The Mowachaht/Muchalaht were shrewd

traders, demanding items more valuable than the usual glass beads and trinkets. They preferred metal objects. The most valuable items the British received in trade were sea otter pelts. According to history books, the Mowachaht/Muchalaht essentially controlled the trade with the British vessels, instead of vice versa. They would paddle out to Cook’s vessels to initiate trade rather than allow the British to approach them at Yuquot. Captain Cook received the war club, either as a gift or through trade with the Mowachaht/Muchalaht. Continued on page 2.