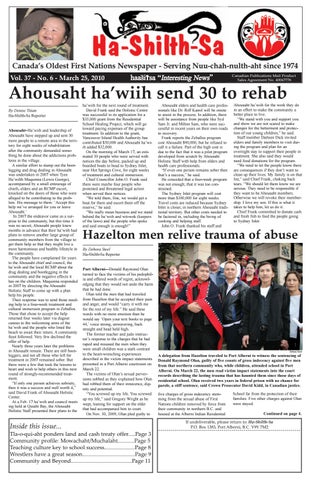 Ahousaht ha’wiih send 30 to rehab By Denise Titian Ha-Shilth-Sa Reporter Ahousaht–Ha’wiih and leadership of Ahousaht have stepped up and sent 30 more people to a remote area in the territory for eight weeks of rehabilitation after the community demanded something be done about the addictions problems in the village. A similar effort to stamp out the bootlegging and drug dealing in Ahousaht was undertaken in 2007 when Tyee Ha’wilth Maquinna (Lewis George), accompanied by a small entourage of chiefs, elders and an RCMP escort, knocked on the doors of those who were alleged to be contributing to the problem. His message to them: ‘Accept this help we’ve arranged for you or leave Ahousaht.’ In 2007 the endeavor came as a surprise to the community, but this time it was no secret; Ahousaht people knew months in advance that their ha’wiih had plans to remove another large group of community members from the village to get them help so that they might live a more harmonious and healthy lifestyle in the community. The people have complained for years to the Ahousaht chief and council, the ha’wiih and the local RCMP about the drug dealing and bootlegging in the community and the negative effects it has on the children. Maquinna responded in 2007 by directing the Ahousaht Holistic Staff to come up with a plan help his people. Their response was to send those needing help to a four-week treatment and cultural immersion program in Zeballos. Those that chose to accept the help returned four weeks later via dugout canoes to the welcoming arms of the ha’wiih and the people who lined the beach to await their return. A community feast followed. Very few declined the offer of help. Nearly three years later the problems in Ahousaht remain. There are still bootleggers, and not all those who left for treatment in 2007 remained sober. But there were a few that took the lessons to heart and wish to help others in this next round of strongly-recommended treatment. “If only one person achieves sobriety, then it was a success and well worth it,” said David Frank of Ahousaht Holistic Center. At a Feb. 17 ha’wiih and council meeting held at Quiaht Bay, the Ahousaht Holistic Staff presented their plans to the

ha’wiih for the next round of treatment. David Frank said the Holistic Centre was successful in its application for a $35,000 grant from the Residential School Healing Project, which will go toward paying expenses of the group treatment. In addition to the grant, Vancouver Island Health Authority has contributed $50,000 and Ahousaht ha’wiih added $32,000. On the morning of March 17, an estimated 30 people who were served with notices the day before, packed up and boarded boats to head to Sydney Inlet, near Hot Springs Cove, for eight weeks of treatment and cultural immersion. Chief Councillor John O. Frank said there were maybe four people who protested and threatened legal action when served their notices. “We told them, fine, we would get a boat for them and escort them off the reserve,” he said. “We really mean business and we stand behind the ha’wiih and wit-wok (keepers of the laws) and the people who spoke and said enough is enough!”

Ahousaht elders and health care professionals like Dr. Riff Kamil will be onsite to assist in the process. In addition, there will be assistance from people like Syd Sam Jr. and Milton Sam, who were successful in recent years on their own roads to recovery. Frank reports the Zeballos program cost Ahousaht $90,000, but he refused to call it a failure. Part of the high cost is due to the fact that it was a pilot program developed from scratch by Ahousaht Holistic Staff with help from elders and health care professionals. “If even one person remains sober then that’s a success,” he said. He conceded that a four-week program was not enough; that it was too constrained. The Sydney Inlet program will cost more than $100,000 for eight weeks. Travel costs are reduced because Sydney Inlet is closer, in northern Ahousaht traditional territory. But other costs needed to be factored in, including the hiring of cooking and helping staff. John O. Frank thanked his staff and

Ahousaht ha’wiih for the work they do in an effort to make the community a better place to live. “We stand with you and support you and show we are not scared to make changes for the betterment and protection of our young children,” he said. Staff member Darleen Dick invited elders and family members to visit during the program and plan for an overnight stay to support their people in treatment. She also said they would need food donations for the program. “We need to let the people know there are consequences if they don’t want to clean up their lives. My family is on that list,” said Chief Frank, choking back tears. “We should let them know we are serious. They need to be responsible if they want to be Ahousaht members. Otherwise we will revoke their membership. I love my son. If this is what it takes to help him, let us do it. Chief Frank committed to donate cash and fresh fish to feed the people going to Sydney Inlet

Hazelton men relive trauma of abuse By Debora Steel Ha-Shilth-Sa Reporter Port Alberni—Donald Raymond Olan turned to face the victims of his pedophilia and offered words of regret, acknowledging that they would not undo the harm that he had done. Olan told the men that had traveled from Hazelton that he accepted their pain and anger, and would “carry it with me for the rest of my life.” He said these words with no more emotion than he would say ‘Open your text books to page 44,’ voice strong, unwavering, back straight and head held high. The former teacher and judo instructor’s response to the charges that he had raped and misused the men when they were small children was a stark contrast to the heart-wrenching experiences described in the victim impact statements presented in a Port Alberni courtroom on March 22. The victims of Olan’s sexual perversions sobbed as they explained how Olan had robbed them of their innocence, dignity and potential. “You screwed up my life. You screwed up my life,” said Gregory Wright as he wept, leaning for support on the elder that had accompanied him to court. On Nov. 30, 2009, Olan pled guilty to

A delegation from Hazelton traveled to Port Alberni to witness the sentencing of Donald Raymond Olan, guilty of five counts of gross indecency against five men from that northern community who, while children, attended school in Port Alberni. On March 22, the men read victim impact statements into the court records describing the lasting trauma that has haunted them since those days of residential school. Olan received two years in federal prison with no chance for parole, a stiff sentence, said Crown Prosecutor David Kidd, in Canadian justice. five charges of gross indecency stemming from the sexual abuse of First Nations children removed by force from their community in northern B.C. and housed at the Alberni Indian Residential

School far from the protection of their families. Five other charges against Olan were stayed. Continued on page 4.