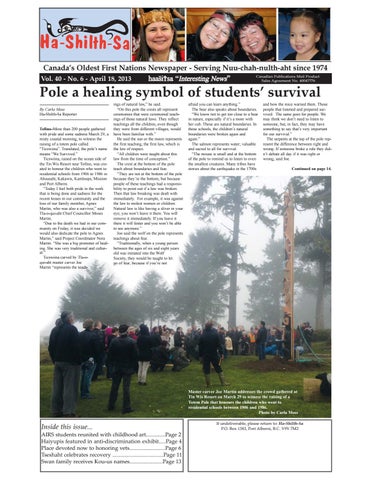 Pole a healing symbol of students’ survival By Carla Moss Ha-Shilth-Sa Reporter Tofino–More than 200 people gathered with pride and some sadness March 29, a misty coastal morning, to witness the raising of a totem pole called “Ticswiina”. Translated, the pole’s name means “We Survived.” Ticswiina, raised on the ocean side of the Tin Wis Resort near Tofino, was created to honour the children who went to residential schools from 1906 to 1986 in Ahousaht, Kakawis, Kamloops, Mission and Port Alberni. “Today I feel both pride in the work that is being done and sadness for the recent losses in our community and the loss of our family member, Agnes Martin, who was also a survivor,” said Tla-o-qui-aht Chief Councillor Moses Martin. “Due to the death we had in our community on Friday, it was decided we would also dedicate the pole to Agnes Martin,” said Project Coordinator Nora Martin. “She was a big promoter of healing. She was very traditional and cultural.” Ticswiina carved by Tla-oqui-aht master carver Joe Martin “represents the teach-

ings of natural law,” he said. “On this pole the crests all represent ceremonies that were ceremonial teachings of those natural laws. They reflect teachings all the children, even though they were from different villages, would have been familiar with.” He said the sun or the moon represents the first teaching, the first law, which is the law of respect. “All children were taught about this law from the time of conception.” The crest at the bottom of the pole teach about boundaries and fear. “They are not at the bottom of the pole because they’re the bottom, but because people of these teachings had a responsibility to point out if a law was broken. Then that law breaking was dealt with immediately. For example, it was against the law to molest women or children. Natural law is like having a sliver in your eye; you won’t leave it there. You will remove it immediately. If you leave it there it will fester and you won’t be able to see anymore.” Joe said the wolf on the pole represents teachings about fear. “Traditionally, when a young person between the ages of six and eight years old was initiated into the Wolf Society, they would be taught to let go of fear, because if you’re not

afraid you can learn anything.” The bear also speaks about boundaries. “We know not to get too close to a bear in nature, especially if it’s a mom with her cub. Those are natural boundaries. In those schools, the children’s natural boundaries were broken again and again.” The salmon represents water; valuable and sacred to all for survival. “The mouse is small and at the bottom of the pole to remind us to listen to even the smallest creatures. Many tribes have stories about the earthquake in the 1700s

and how the mice warned them. Those people that listened and prepared survived. The same goes for people. We may think we don’t need to listen to someone, but, in fact, they may have something to say that’s very important for our survival.” The serpents at the top of the pole represent the difference between right and wrong. If someone broke a rule they didn’t debate all day if it was right or wrong, said Joe. Continued on page 14.

Master carver Joe Martin addresses the crowd gathered at Tin Wis Resort on March 29 to witness the raising of a Totem Pole that honours the children who went to residential schools between 1906 and 1986. Photo by Carla Moss