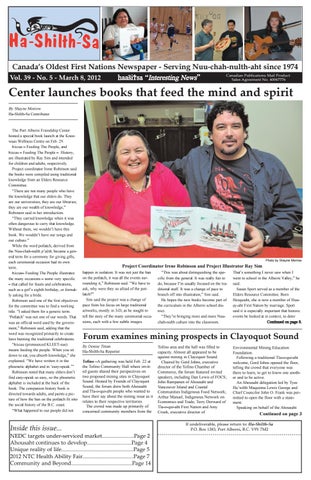 The Port Alberni Friendship Center hosted a special book launch at the Kneewaas Wellness Centre on Feb. 29. +iicuu – Feeding The People, and +iicuu – Feeding The People – History, are illustrated by Ray Sim and intended for children and adults, respectively. Project coordinator Irene Robinson said the books were compiled using traditional knowledge from an Elders Resource Committee. “There are not many people who have the knowledge that our elders do. They are our universities; they are our libraries; they are our wealth of knowledge,” Robinson said in her introduction. “They carried knowledge when it was often dangerous to carry that knowledge. Without them, we wouldn’t have this book. We wouldn’t have our songs and our culture.” While the word potlatch, derived from the Nuu-chah-nulth p’ac^i+, became a general term for a ceremony for giving gifts, each ceremonial occasion had its own term. +iicuu– Feeding The People illustrates the many occasions – some very specific – that called for feasts and celebrations, such as a girl’s eighth birthday, or formally asking for a bride. Robinson said one of the first objectives for the committee was to find a working title. “I asked them for a generic term. ‘Potlatch’ was not one of our words. That was an official word used by the government,” Robinson said, adding that the word was recognized primarily to create laws banning the traditional celebrations. “+iicuu (pronounced KLEET-sue) means feeding the people. When you sit down to eat, you absorb knowledge,” she explained. “We have written it in the phoenetic alphabet and in ‘easy-speak.’” Robinson noted that many elders don’t find easy-speak so easy, so the phoenetic alphabet is included at the back of the book. The companion history book is directed towards adults, and paints a picture of how the ban on the potlatch fit into the social history of the B.C. coast. “What happened to our people did not

Project Coordinator Irene Robinson and Project Illustrator Ray Sim happen in isolation. It was not just the ban on the potlatch, it was all the events surrounding it,” Robinson said. “We have to ask, why were they so afraid of the potlatch?” Sim said the project was a change of pace from his focus on large traditional artworks, mostly in 3-D, as he sought to tell the story of the many ceremonial occasions, each with a few subtle images.

“This was about distinguishing the specific from the general. It was really fun to do, because I’m usually focused on the traditional stuff. It was a change of pace to branch off into illustration,” Sim said. He hopes the new books become part of the curriculum in the Alberni school district. “They’re bringing more and more Nuuchah-nulth culture into the classroom.

That’s something I never saw when I went to school in the Alberni Valley,” he said. Susan Sport served as a member of the Elders Resource Committee. Born Hesquiaht, she is now a member of Huuay-aht First Nation by marriage. Sport said it is especially important that historic events be looked at in context, to deter Continued on page 8.

Forum examines mining prospects in Clayoquot Sound By Denise Titian Ha-Shilth-Sa Reporter Tofino –A gathering was held Feb. 22 at the Tofino Community Hall where invited guests shared their perspectives on two proposed mining sites in Clayoquot Sound. Hosted by Friends of Clayoquot Sound, the forum drew both Ahousaht and Tla-o-qui-aht people who wanted to have their say about the mining issue as it relates to their respective territories. The crowd was made up primarily of concerned community members from the

Tofino area and the hall was filled to capacity. Almost all appeared to be against mining in Clayoquot Sound. Chaired by Gord Johns, executive director of the Tofino Chamber of Commerce, the forum featured invited speakers, including Dan Lewis of FOCS; John Rampanen of Ahousaht and Vancouver Island and Coastal Communities Indigenous Food Network; Arthur Manuel, Indigenous Network on Economies and Trade; Terry Dorward of Tla-o-qui-aht First Nation and Amy Crook, executive director of

Environmental Mining Education Foundation. Following a traditional Tla-o-qui-aht welcome, Gord Johns opened the floor, telling the crowd that everyone was there to learn, to get to know one another and to be active. An Ahousaht delegation led by Tyee Ha’wilth Maquinna Lewis George and Chief Councilor John O. Frank was permitted to open the floor with a statement. Speaking on behalf of the Ahousaht