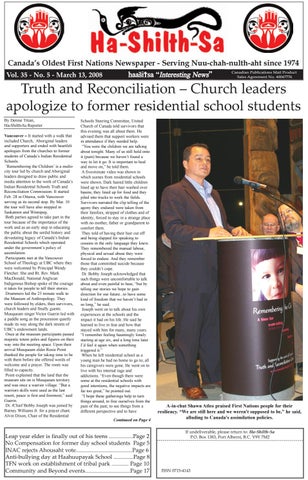 Truth and Reconciliation – Church leaders apologize to former residential school students By Denise Titian, Ha-Shilth-Sa Reporter Vancouver – It started with a walk that included Church, Aboriginal leaders and supporters and ended with heartfelt apologies from the churches to former students of Canada’s Indian Residential Schools. ‘Remembering the Children’ is a multicity tour led by church and Aboriginal leaders designed to draw public and media attention to the work of Canada’s Indian Residential Schools Truth and Reconciliation Commission. It started Feb. 28 in Ottawa, with Vancouver serving as its second stop. By Mar. 10 the tour will have also stopped in Saskatoon and Winnipeg. Both parties agreed to take part in the tour because of the importance of the work and as an early step in educating the public about the sordid history and devastating legacy of Canada’s Indian Residential Schools which operated under the government’s policy of assimilation. Participants met at the Vancouver School of Theology at UBC where they were welcomed by Principal Wendy Fletcher. She and Rt. Rev. Mark MacDonald, National Anglican Indigenous Bishop spoke of the courage it takes for people to tell their stories. Drummers led the 25 minute walk to the Museum of Anthropology. They were followed by elders, then survivors, church leaders and finally guests. Musqueam singer Victor Guerin led with a paddle song as the procession quietly made its way along the dark streets of UBC’s endowment lands. Once at the museum participants passed majestic totem poles and figures on their way into the meeting space. Upon their arrival Musqueam elder Rosie Point thanked the people for taking time to be with them before she offered words of welcome and a prayer. The room was filled to capacity. Point explained that the land that the museum sits on is Musqueam territory and was once a warrior village. “But a warriors skills were used as the last resort, peace is first and foremost,” said Guerin. Dr. /Chief Bobby Joseph was joined by Barney Williams Jr. for a prayer chant. Alvin Dixon, Chair of the Residential

Schools Steering Committee, United Church of Canada told survivors that this evening was all about them. He advised them that support workers were in attendance if they needed help. “You were the children we are talking about tonight. Many of us still hold onto it (pain) because we haven’t found a way to let it go. It is important to heal and move on,” he told them. A five-minute video was shown in which scenes from residential schools were shown. Dark haired little children lined up to have their hair washed over basins; they lined up for food and they piled into trucks to work the fields. Survivors narrated the clip telling of the agony they endured were taken from their families, stripped of clothes and of identity; forced to stay in a strange place with no mother, father or grandparent to comfort them. They told of having their hair cut off and being slapped for speaking to cousins in the only language they knew. They remembered the manual labour, physical and sexual abuse they were forced to endure. And they remember those that committed suicide because they couldn’t cope. Dr. Bobby Joseph acknowledged that such things were uncomfortable to talk about and even painful to hear, “but by telling our stories we hope to gain direction for our future...to have some kind of freedom that we haven’t had in so long,” he said. Joseph went on to talk about his own experiences at the schools and the impact it had on his life. He said he learned to live in fear and how that stayed with him for many, many years. “I remember feeling hauntingly lonely starting at age six, and a long time later I’d feel it again when something triggered it.” When he left residential school as a young man he had no home to go to; all his caregivers were gone. He went on to live with his internal rage and addictions. “Even though there were some at the residential schools with good intentions, the negative impacts are far too great,” he pointed out. “I hope these gatherings help to turn things around, to free ourselves from the pain of the past; to see things from a different perspective and to have Continued on Page 4

A-in-chut Shawn Atleo praised First Nations people for their resiliency. “We are still here and we weren&#39;t supposed to be,” he said, alluding to Canada&#39;s assimilation policies. If undeliverable, please return to: Ha-Shilth-Sa P.O. Box 1383, Port Alberni, B.C. V9Y 7M2