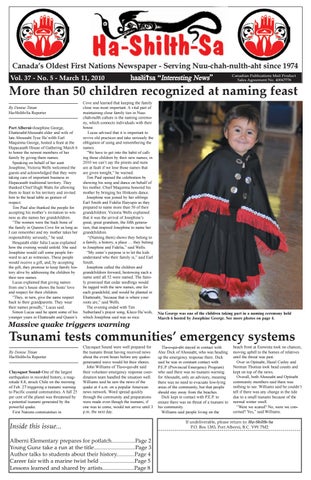 More than 50 children recognized at naming feast By Denise Titian Ha-Shilth-Sa Reporter Port Alberni–Josephine George, Ehattesaht/Ahousaht elder and wife of late Ahousaht Tyee Ha’wilth Earl Maquinna George, hosted a feast at the Hupacasath House of Gathering March 6 to honor the newest members of her family by giving them names. Speaking on behalf of her aunt Josephine, Victoria Wells welcomed the guests and acknowledged that they were taking care of important business in Hupacasath traditional territory. They thanked Chief Hugh Watts for allowing them to feast in his territory and invited him to the head table as gesture of respect. Tim Paul also thanked the people for accepting his mother’s invitation to witness as she names her grandchildren. “The women were the back bone of the family in Queens Cove for as long as I can remember and my mother takes her responsibility seriously,” he said. Hesquiaht elder Julia Lucas explained how the evening would unfold. She said Josephine would call some people forward to act as witnesses. These people would receive a gift, and, by accepting the gift, they promise to keep family history alive by addressing the children by their new names. Lucas explained that giving names from one’s house shows the hosts’ love and respect for their children. “They, in turn, give the same respect back to their grandparents. They wear their names proudly,” Lucas said. Simon Lucas said he spent some of his younger years in Ehattesaht and Queen’s

Cove and learned that keeping the family close was most important. A vital part of maintaining close family ties in Nuuchah-nulth culture is the naming ceremony, which connects individuals with their house. Lucas advised that it is important to revive old practices and take seriously the obligation of using and remembering the names. “We have to get into the habit of calling those children by their new names; in 2010 we can’t say the priests and nuns are at fault if we lose those names that are given tonight,” he warned. Tim Paul opened the celebration by showing his song and dance on behalf of his mother. Chief Maquinna honored his mother by bringing his Hinkeets dance. Josephine was joined by her siblings Earl Smith and Fidelia Haiyupis as they prepared to name more than 50 of their grandchildren. Victoria Wells explained that it was the arrival of Josephine’s great, great grandson, the fifth generation, that inspired Josephine to name her grandchildren. “(Naming them) shows they belong to a family, a history, a place … they belong to Josephine and Fidelia,” said Wells. “My sister’s purpose is to let the kids understand who their family is,” said Earl Smith. Josephine called the children and grandchildren forward, bestowing each a name until all 52 were named. The family promised that cedar seedlings would be tagged with the new names, one for each grandchild, and would be planted in Ehattesaht, ‘because that is where your roots are,” said Wells. The evening ended with Tim Sutherland’s prayer song, Kleco Ha’wiih, which Josephine said was so nice.

Nia George was one of the children taking part in a naming ceremony held March 6 hosted by Josephine George. See more photos on page 4.

Tsunami tests communities’ emergency systems By Denise Titian Ha-Shilth-Sa Reporter Clayoquot Sound–One of the largest earthquakes in recorded history, a magnitude 8.8, struck Chile on the morning of Feb. 27 triggering a tsunami warning to Pacific coastal communities. A full 25 per cent of the planet was threatened by a potential tsunami generated by the powerful quake. First Nations communities in

Clayoquot Sound were well prepared for the tsunami threat having received news about the event hours before any quakegeneraated wave would hit their shores. John Williams of Tla-o-qui-aht said their volunteer emergency response coordination team handled the situation well. Williams said he saw the news of the quake at 4 a.m. on a popular American news network. Word spread quickly through the community and preparations were made even though the tsunami, if one was to come, would not arrive until 3 p.m. the next day.

beach front at Esowista took no chances, moving uphill to the homes of relatives until the threat was past. Over in Opitsaht, Hazel Curley and Norman Thomas took head counts and kept on top of the news. Overall, both Ahousaht and Opitsaht community members said there was nothing to see. Williams said he couldn’t tell if there was any change in the tide due to a small tsunami because of the normal winter swell. “Were we scared? No, were we concerned? Yes,” said Williams.