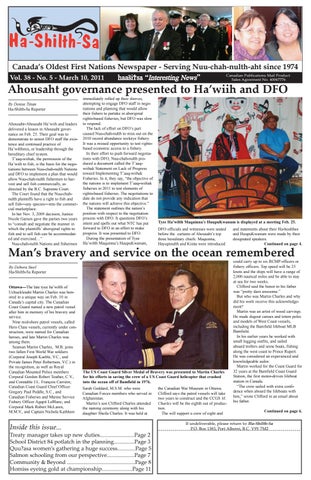 Ahousaht governance presented to Ha’wiih and DFO By Denise Titian Ha-Shilth-Sa Reporter Ahousaht–Ahousaht Ha’wiih and leaders delivered a lesson in Ahousaht governance on Feb. 25. Their goal was to demonstrate to senior DFO staff the existence and continued practice of Ha’wilthmis, or leadership through the hereditary chief system. T’aaq-wiihak, the permission of the Ha’wiih to fish, is the basis for the negotiations between Nuu-chah-nulth Nations and DFO to implement a plan that would allow Nuu-chah-nulth fishermen to harvest and sell fish commercially, as directed by the B.C. Supreme Court. The Court found that the Nuu-chahnulth plaintiffs have a right to fish and sell fish—any species—into the commercial marketplace. In her Nov. 3, 2009 decision, Justice Nicole Garson gave the parties two years to “consult and negotiate the manner in which the plaintiffs’ aboriginal rights to fish and to sell fish can be accommodated and exercised…” Nuu-chah-nulth Nations and fishermen

immediately rolled up their sleeves, attempting to engage DFO staff in negotiations and planning that would allow their fishers to partake in aboriginal rights-based fisheries, but DFO was slow to respond. The lack of effort on DFO’s part caused Nuu-chah-nulth to miss out on the 2010 record abundance sockeye fishery. It was a missed opportunity to test rightsbased economic access to a fishery. In their effort to push forward negotiations with DFO, Nuu-chah-nulth produced a document called the T’aaqwiihak Statement on Lack of Progress toward Implementing T’aaq-wiihak Fisheries. In it, they say, “the objective of the nations is to implement T’aaq-wiihak fisheries in 2011 to test elements of rights-based fisheries. The negotiations to date do not provide any indication that the nations will achieve this objective.” The statement outlines the nation’s position with respect to the negotiation process with DFO. It questions DFO’s intent and spells out what NTC has put forward to DFO in an effort to make progress. It was presented to DFO. During the presentation of Tyee Ha’wilth Maquinna’s HuupuKwanum,

Tyee Ha’wilth Maquinna’s HuupuKwanum is displayed at a meeting Feb. 25. DFO officials and witnesses were seated before the curtains of Ahousaht’s top three hereditary chiefs. Maquinna, Hayupinulth and Kiista were introduced

and statements about their Ha-houlthee and HuupuKwanum were made by their designated speakers. Continued on page 4.

The US Coast Guard Silver Medal of Bravery was presented to Martin Charles for his efforts in saving the crew of a US Coast Guard helicopter that crashed into the ocean off of Bamfield in 1976. Sarah Goddard, M.S.M. who were Canadian Forces members who served in Afghanistan. Martin’s son Clifford Charles attended the naming ceremony along with his daughter Sheila Charles. It was held at

the Canadian War Museum in Ottawa. Clifford says the patrol vessels will take two years to construct and the CCGS M. Charles will be the eighth out of production. The will support a crew of eight and

could carry up to six RCMP officers or fishery officers. Top speed will be 25 knots and the ships will have a range of 2,000 nautical miles and be able to stay at sea for two weeks. Clifford said the honor to his father was “pretty darn awesome.” But who was Martin Charles and why did his work receive this acknowledgement? Martin was an artist of wood carvings. He made dugout canoes and totem poles and models of West Coast vessels, including the Bamfield lifeboat MLB Bamfield. In his earlier years he worked with small logging outfits, and sailed aboard trollers and seine boats, fishing along the west coast to Prince Rupert. He was considered an experienced and knowledgeable sailor. Martin worked for the Coast Guard for 32 years at the Bamfield Coast Guard Station, the first motor-driven lifeboat station in Canada. “The crew sailed with extra confidence when aboard the lifeboats with him,” wrote Clifford in an email about his father. Continued on page 6.