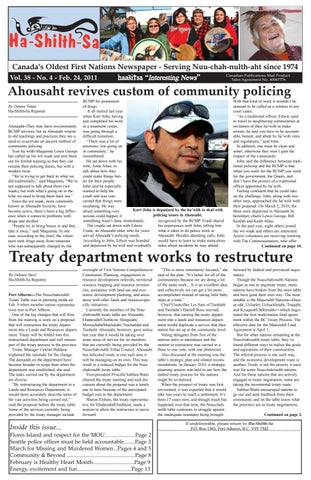 Ahousaht revives custom of community policing By Denise Titian Ha-Shilth-Sa Reporter Ahousaht–They may have in-community RCMP services, but as Ahousaht returns to old teachings and practices they see a need to re-activate an ancient method of community policing. Tyee ha’wilth Maquinna Lewis George has called up his wit waak and sent them out for formal training so that they can resume their policing duties, but with a modern twist. “We’re trying to get back to what we did traditionally,” said Maquinna. “We’re not supposed to talk about them (wit waak), but with what’s going on in the tribe we need to bring them back out.” Since the wit waak, more commonly known as Ahousaht Security, have become active, there’s been a big difference when it comes to problems with drugs and alcohol. “People try to bring booze in and they take it away,” said Maquinna. In one case, according to the chief, the volunteers took drugs away from someone who was subsequently charged by the

RCMP for possession of drugs. It all started last year when Kurt John, having just completed his work in a treatment center, was going through a difficult transition. “There was a lot of emotions, lots going on in community,” he remembered. He sat down with his wife, Anne Atleo, to talk about how they could make things better for their people. John said he especially wanted to help the youth and was concerned that things were escalating. He was Kurt John is deputized by the ha’wiih to deal with afraid something very policing issues in Ahousaht. serious could happen if something wasn’t done immediately. recognized by the RCMP. Frank shared The couple sat down with Edwin his experiences with John, telling him Frank, an Ahousaht elder who for years what it takes to do police work in served Ahousaht’s policing needs. Ahousaht. Besides attending calls, John According to John, Edwin was branded would have to learn to make meticulous and deputized by ha’wiih and eventually notes about incidents he may attend.

With that kind of work it wouldn’t be unusual to be called as a witness in any court cases. “As a traditional officer, Edwin used to travel to neighboring communities at invitation of their ha’wiih to make arrests; he said you have to be accountable, honest, and abide by ha’wiih rules and regulations,” said John. In addition, one must be clean and sober; otherwise they won’t gain the respect of the community. John said the difference between traditional policing and the RCMP is that when you work for the RCMP you work for the government, the Queen, and don’t have the powers of a traditional officer appointed by ha’wiih. Feeling confident that he could take on the challenge, John, along with two other men, approached the ha’wiih with their proposal. On March 2, 2010, the three were deputized in Ahousaht by hereditary chiefs Lewis George, Bill Keitlah and Keith Atleo. In the past year, eight others joined the wit waak and others are interested. Active volunteers are receiving working with The Commissionaires, who offer Continued on page 10.

Treaty department works to restructure By Debora Steel Ha-Shilth-Sa Reporter Port Alberni—The Nuu-chah-nulth Treaty Table was in planning mode on Feb. 9 when member nation representatives met in Port Alberni. One of the big changes that will flow from the meeting is work on a proposal that will restructure the treaty department into a Lands and Resources department. Treaty will be folded into this restructured department and will remain part of the treaty process in the province. Treaty Manager Celeste Haldane explained the rationale for the change. The demands on the department have become broader in scope than when the department was established, she said. The tasks carried out by the department are diverse. “By restructuring the department to a Lands and Resources Department, it would more accurately describe some of the vast activities being carried out,” read the proposal before the treaty table. Some of the services currently being provided by the treaty manager include

oversight of First Nations Comprehensive Community Planning, engagement in resource development referrals, territorial resource mapping and resource inventories, assistance with land use and economic development planning, and assistance with other lands and resource-specific initiatives. Currently the members of the Nuuchah-nulth treaty table are Ahousaht, Ehattesaht/Chinhkint, Hesquiaht, Mowachaht/Muchalaht, Nuchatlaht and Tseshaht. Ahousaht, however, gave notice last year that it would be taking over some areas of service for its members that are currently being provided by the Nuu-chah-nulth Tribal Council. Ahousaht has indicated treaty is one such area it will be managing on its own. This may result in a reduced budget for the Nuuchah-nulth treaty table. Vice-president Priscilla Sabbas-Watts chaired the treaty meeting and said discussion about the proposal was a timely one to have because of the anticipated budget cuts to the department. Sharon Elshaw, the treaty representative for Ehattesaht/Chinhkint, made a motion to allow the restructure to move forward.

“This is more community focused,” she said of the plan. “It’s better for all of the communities because we are doing a lot of the same work... It is an excellent idea, and collectively we can get a lot more accomplished instead of taking little baby steps at a time.” Chief Councillor Les Sam of Tseshaht and Tseshaht’s Darrell Ross worried, however, that turning the treaty department into a lands and resources department would duplicate a service that their nation has set up at the community level. Voting delegates from five of the nations were in attendance and the motion to restructure was carried in a three to one vote, with one abstention. Also discussed at the meeting was the table’s strategic plan and related recommendations. In January 2010, a strategic planning session was held to see how the stalled treaty process for the nations might be revitalized. When the prospect of treaty was first envisioned, it was expected that it would take two years to reach a settlement. It’s been 17 years now, and though much has happened over that time, the Nuu-chahnulth table continues to struggle against the inadequate mandates being brought

forward by federal and provincial negotiators. Though the Nuu-chah-nulth Nations began as one to negotiate treaty, many nations have broken from the main table and have gone their own way. The most notable is the Maa-nulth Nations—Huuay-aht, Ucluelet, Uchucklesaht, Toquaht, and Kyuquot/Cheklesaht— which negotiated the first multi-nation final agreement within the BC Treaty Process. The effective date for the Maa-nulth Final Agreement is April 1. But for other nations remaining at the Nuu-chah-nulth treaty table, they’ve found different ways to realize the goals and aspirations of their communities. The referral process is one such way, and the economic development route is another. Treaty is not the priority it once was for some Nuu-chah-nulth nations. And for those nations that are actively engaged in treaty negotiation, some are taking the incremental treaty route. Sabbas-Watts encouraged nations to go out and seek feedback from their community and let the table know what the priorities are in treaty negotiations. Continued on page 2.