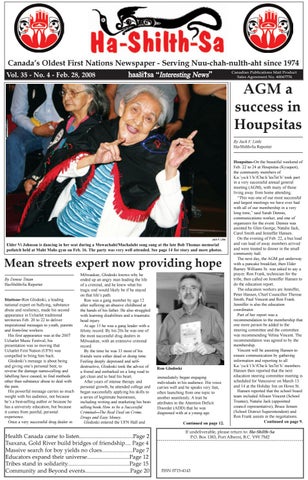 Elder Vi Johnson is dancing in her seat during a Mowachaht/Muchalaht song sung at the late Bob Thomas memorial potlatch held at Maht Mahs gym on Feb. 16. The party was very well attended. See page 14 for story and more photos.

Mean streets expert now providing hope By Denise Titian Ha-Shilth-Sa Reporter Ittattsoo–Ron Glodoski, a leading national expert on bullying, substance abuse and resiliency, made his second appearance in Ucluelet traditional territories Feb. 20 to 22 to deliver inspirational messages to youth, parents and front-line workers. His first appearance was at the 2007 Ucluelet Music Festival; his presentation was so moving that Ucluelet First Nation (UFN) was compelled to bring him back. Glodoski’s message is about being and giving one’s personal best; to reverse the damage name-calling and labelling have caused, to find methods other than substance abuse to deal with the pain. His powerful message carries so much weight with his audience, not because he’s a best-selling author or because he has a university education, but because it comes from painful, personal experience. Once a very successful drug dealer in

Milwaukee, Glodoski knows why he ended up an angry man leading the life of a criminal, and he knew what his tragic end would likely be if he stayed on that life’s path. Ron was a gang member by age 12 after suffering an abusive childhood at the hands of his father. He also struggled with learning disabilities and a traumatic head injury. At age 15 he was a gang leader with a felony record. By his 20s he was one of the most successful drug dealers in Milwaukee, with an extensive criminal record. By the time he was 33 most of his friends were either dead or doing time. Feeling deeply depressed and selfdestructive, Glodoski took the advice of a friend and embarked on a long road to get clean and to heal his heart. After years of intense therapy and personal growth, he attended college and began successfully applying his skills to a series of legitimate businesses, including writing and marketing his bestselling book How to be a Successful Criminal—The Real Deal on Crime, Drugs and Easy Money. Glodoski entered the UFN Hall and

Ron Glodoski immediately began engaging individuals in his audience. His voice carries well and he speaks very fast, often launching from one topic to another seamlessly. A trait he attributes to the Attention Deficit Disorder (ADD) that he was diagnosed with at a young age. Continued on page 12.

Houpsitas–On the beautiful weekend of Feb. 22 to 24 at Houpsitas (Kyuquot), the community members of Ka:’yu:k’t’h’/Che:k’les7et’h’ took part in a very successful annual general meeting (AGM), with many of those living away from home attending. “This was one of our most successful and largest meetings we have ever had with all of our membership in a very long time,” said Sarah Dennis, communications worker, and one of organizers for the event. Dennis was assisted by Glen George, Natalie Jack, Carol Smith and Jenniffer Hansen. On the evening of Feb. 22, a bus load and van load of away members arrived and were treated to dinner in the small community hall. The next day, the AGM got underway with a pancake breakfast; then Elder Barney Williams Sr. was asked to say a prayer. Ron Frank, technician for the tribe, then called on Jenniffer Hansen to do the education report. The education workers are Jenniffer, Peter Hansen, Chief Councillor Therese Smith, Paul Vincent and Ron Frank. Jenniffer is also the education coordinator. Part of her report was a recommendation to the membership that one more person be added to the steering committee and the committee was recommending Velina Vincent. The recommendation was agreed to by the membership. Vincent will be assisting Hansen to ensure communication by gathering information and reporting to all Ka:’yu:k’t’h’/Che:k’les7et’h’ members. Hansen then reported that the next education steering committee meeting is scheduled for Vancouver on March 13 and 14 at the Holiday Inn on Howe St. Hansen reported that the school board team included Allison Vincent (School Trustee), Natalie Jack (appointed council representative), Bruce Jensen (School District Superintendent) and Ron Frank assists in the negotiations. Continued on page 9.