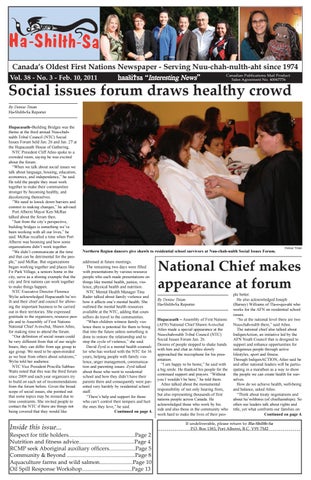 Social issues forum draws healthy crowd By Denise Titian Ha-Shilth-Sa Reporter Hupacasath–Building Bridges was the theme at the third annual Nuu-chahnulth Tribal Council (NTC) Social Issues Forum held Jan. 26 and Jan. 27 at the Hupacasath House of Gathering. NTC President Cliff Atleo spoke to a crowded room, saying he was excited about the forum. “When we talk about social issues we talk about language, housing, education, economics, and independence,” he said. He told the people they must work together to make their communities stronger by becoming healthy, and decolonizing themselves. “We need to knock down barriers and commit to making changes,” he advised. Port Alberni Mayor Ken McRae talked about the forum then. “Just from the city’s perspective, building bridges is something we’ve been working with all our lives,” he said. McRae recalled a time when Port Alberni was booming and how some organizations didn’t work together. “We didn’t communicate at the time and that can be detrimental for the people,” said McRae. But organizations began working together and places like Fir Park Village, a seniors home in the city, serve as a shining example that the city and first nations can work together to make things happen. NTC Executive Director Florence Wylie acknowledged Hupacasath ha’wiih and their chief and council for allowing the important business to be carried out in their territories. She expressed gratitude to the organizers, resource people and to Assembly of First Nations National Chief A-in-chut, Shawn Atleo, for making time to attend the forum. “Our definition of social issues could be very different from that of our neighbours; they can differ from age group to age group. We need to be open-minded as we hear from others about solutions,” Wylie told her audience. NTC Vice President Priscilla SabbasWatts noted that this was the third forum since 2009 and each year organizers try to build on each set of recommendations from the forum before. Given the broad scope of social issues, she pointed out that some topics may be missed due to time constraints. She invited people to contact the NTC if there are things not being covered that they would like

Northern Region dancers give shawls to residential school survivors at Nuu-chah-nulth Social Issues Forum. addressed at future meetings. The remaining two days were filled with presentations by various resource people who each made presentations on things like mental health, justice, violence, physical health and nutrition. NTC Mental Health Manager Tina Rader talked about family violence and how it affects one’s mental health. She outlined the mental health resources available at the NTC, adding that counsellors do travel to the communities. “When children witness family violence there is potential for them to bring that into the future unless something is done to restore the relationship and to stop the cycle of violence,” she said. David Zyrd is a mental health counsellor who has worked with the NTC for 16 years, helping people with family violence, anger management, communication and parenting issues. Zyrd talked about those who went to residential school and how they didn’t have their parents there and consequently were parented very harshly by residential school staff. “There’s help and support for those who can’t control their tempers and hurt the ones they love,” he said. Continued on page 4.

National Chief makes appearance at forum By Denise Titian Ha-Shilth-Sa Reporter Hupacasath – Assembly of First Nations (AFN) National Chief Shawn A-in-chut Atleo made a special appearance at the Nuu-chah-nulth Tribal Council (NTC) Social Issues Forum Jan. 26. Dozens of people stopped to shake hands with him and chat as Atleo slowly approached the microphone for his presentation. “I am happy to be home,” he said with a big smile. He thanked his people for the continued support and prayers. “Without you I wouldn’t be here,” he told them. Atleo talked about the monumental responsibility of not only hearing from, but also representing thousands of first nations people across Canada. He acknowledged those who work by his side and also those in the community who work hard to make the lives of their peo-

ple better. He also acknowledged Joseph (Barney) Williams of Tla-o-qui-aht who works for the AFN on residential school issues. “So at the national level there are two Nuu-chah-nulth there,” said Atleo. The national chief also talked about IndigenAction, an initiative led by the AFN Youth Council that is designed to support and enhance opportunities for indigenous people through active lifestyles, sport and fitness. Through IndigenACTION, Atleo said he and other national leaders will be participating in a marathon as a way to show the people we can create health for ourselves. How do we achieve health, well-being and balance, asked Atleo. “Think about treaty negotiations and about ha’wilthmis (of chieftainships). So often our leaders talk about rights and title, yet what confronts our families on Continued on page 4.