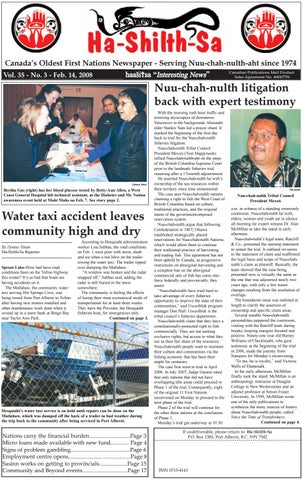 Nuu-chah-nulth litigation back with expert testimony

Water taxi accident leaves community high and dry By Denise Titian Ha-Shilth-Sa Reporter Sproat Lake–How bad have road conditions been on the Tofino highway this winter? It’s so bad that boats are having accidents on it. The Matlahaw, the community water taxi serving Hot Springs Cove, was being towed from Port Alberni to Tofino after having new motors installed and other maintenance work done when it wound up in a snow bank at Bingo Bay near Taylor Arm Park.

According to Hesquiaht administration worker Lisa Sabbas, the road conditions on Feb. 1 were poor with snow, slush and ice when a tire blew on the trailer towing the water taxi. The trailer tipped over dumping the Matlahaw. “A window was broken and the radar snapped off,” Sabbas said, adding the radar is still buried in the snow somewhere. The community is feeling the effects of losing their most economical mode of transportation for at least three weeks. They have the Provider, the Hesquiaht fisheries boat, for emergencies only. Continued on page 3.

Hesquiaht’s water taxi service is on hold until repairs can be done on the Matlahaw, which was dumped off the back of a trailer in bad weather during the trip back to the community after being serviced in Port Alberni.

With the morning rush hour traffic and towering skyscrapers of downtown Vancouver in the background, Ahousaht elder Stanley Sam led a prayer chant. It marked the beginning of the first day back to trial for the Nuu-chah-nulth fisheries litigation. Nuu-chah-nulth Tribal Council President Mexsis (Tom Happynook) rallied Nuu-chah-nulth-aht on the steps of the British Columbia Supreme Court prior to the landmark fisheries trial resuming after a 17-month adjournment. He asserted Nuu-chah-nulth ha’wiih’s ownership of the sea resources within their territory since time immemorial. The case sees Nuu-chah-nulth nations claiming a right to fish the West Coast of British Columbia based on culture, traditional practices, and the original intent of the government-imposed reservation system. Nuu-chah-nulth argue that following Confederation in 1867, Ottawa established strategically placed reservations for Nuu-chah-nulth Nations, which would allow them to continue their traditional practice of harvesting and trading fish. This agreement has not been upheld by Canada, as progressive restrictions on aboriginal harvesting and a complete ban on the aboriginal commercial sale of fish has come into force federally and provincially, they assert. “Nuu-chah-nulth have tried hard to take advantage of every fisheries opportunity to improve the state of their communities,” said Uu-a-thluk program manager Don Hall. Uu-a-thluk is the tribal council’s fisheries department. Nuu-chah-nulth claim that they have a constitutionally-protected right to fish commercially. They are not seeking exclusive rights, but access to what they see as their fair share of the resources. Nuu-chah-nulth people want to maintain their culture and communities via the fishing economy that has been their staple for centuries. The case first went to trial in April 2006. In July 2007, Judge Garson ruled that only nations that did not have overlapping title areas could proceed in Phase 1 of the trial. Consequently, eight of the original 11 First Nations reconvened on Monday to proceed to the next phase of the trial. Phase 2 of the trial will continue for the other three nations at the conclusion of Phase 1. Monday’s trial got underway at 10:30

Nuu-chah-nulth Tribal Council President Mexsis a.m. in witness of a standing room-only courtroom. Nuu-chah-nulth ha’wiih, elders, women and youth sat in silence all morning for expert witness Dr. Alan McMillan to take the stand in early afternoon. Nuu-chah-nulth’s legal team, Ratcliff &amp; Co., presented the opening statement to restart the trial. It outlined revisions to the statement of claim and reaffirmed the legal basis and scope of Nuu-chahnulth’s claim as plaintiff. Basically, the team showed that the case being presented now is virtually the same as the one that was adjourned nearly two years ago, with only a few minor changes resulting from the resolution of overlaps. The boundaries issue was outlined at length to clarify the assertion of ownership and specific claim areas. Several notable Nuu-chah-nulth personalities peppered the courtroom, visiting with the Ratcliff team during breaks, keeping energies focused and positive. Ninety-one year old Barney Williams of Checklesaht, who gave testimony at the beginning of the trial in 2006, made the journey from Nanaimo for Monday’s reconvening. “To me, he is royalty,” said Victoria Wells of Ehattesaht. In the early afternoon, McMillan finally took the stand. McMillan is an anthropology instructor at Douglas College in New Westminister and an adjunct professor at Simon Fraser University. In 1999, McMillan wrote one of the only publications to synthesize the many sources of history about Nuu-chah-nulth people, called Since the Time of Transformers. Continued on page 4.