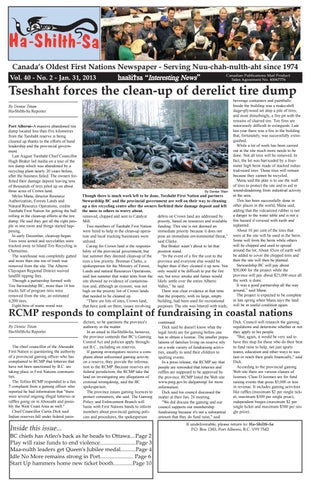 Tseshaht forces the clean-up of derelict tire dump By Denise Titian Ha-Shilth-Sa Reporter Port Alberni–A massive abandoned tire dump located less than five kilometres from the Tseshaht reserve is being cleaned up thanks to the efforts of band leadership and the provincial government. Last August Tseshaht Chief Councillor Hugh Braker led media on a tour of the tire dump which was abandoned by a recycling plant nearly 20 years before, after the business failed. The owners forfeited their damage deposit leaving tens of thousands of tires piled up on about three acres of Crown land. Myles Mana, director Resource Authorization, Forests Lands and Natural Resource Operations, credits Tseshaht First Nation for getting the ball rolling in the clean-up efforts at the tire dump. He said they got all the right people in one room and things started happening. In early December, clean-up began. Tires were sorted and recyclables were trucked away to Island Tire Recycling in Chemainus. The warehouse was completely gutted and more than one ton of trash was removed from the site. The Alberni Clayoquot Regional District waived landfill tipping fees. Through a partnership formed with Tire Stewardship BC, more than 14 bin trucks full of program tires were removed from the site, an estimated 4,200 tires. Eight bins of waste wood was

Though there is much work left to be done, Tseshaht First Nation and partners Stewardship BC and the provincial government are well on their way to cleaning up a tire recycling centre after the owners forfeited their damage deposit and left the mess to others to worry about. removed, chipped and sent to Catalyst debris on Crown land are addressed by Mill. priority, based on resources and available Two members of Tseshaht First Nation funding. This site is not deemed an were hired to help in the clean-up operaimmediate priority because it does not tion and local trucking businesses were pose an immediate environmental threat,” utilized. said Clarke. Caring for Crown land is the responsiBut Braker wasn’t about to let that bility of the provincial government, but position stand. last summer they deemed clean-up of the “In the event of a fire the cost to the tires a low priority. Brennan Clarke, a province and everyone else would be spokesperson for the Ministry of Forest, higher than if they cleaned it up now. Not Lands and natural Resources Operations, only would it be difficult to put the fire said last summer that water tests from the out, but toxic smoke and fumes would site showed no evidence of contaminalikely settle over the entire Alberni tion and, although an eyesore, was not Valley,” he said. high on the priority list of Crown lands There was clear evidence at that time that needed to be cleaned up. that the property, with its large, empty “There are lots of sites, Crown land, building, had been used for recreational that have junk on them; issues involving purposes. The site was littered with trash,

beverage containers and paintballs. Inside the building was a make-shift stage–plywood set atop a pile of tires; and most disturbingly, a fire pit with the remains of charred tire. Tire fires are notoriously difficult to extinguish. Late last year there was a fire in the building that, fortunately, was successfully extinguished. While a lot of work has been carried out at the site much more needs to be done. Not all tires will be removed. In fact, the lot was barricaded by a fourmeter high berm made of stacked industrial-sized tires. Those tires will remain because they cannot be recycled. Mana said the plan is to use the wall of tires to protect the site and to aid in sound-deadening from industrial activity in the area. This has been successfully done in other places in the world, Mana said, adding that the vulcanized rubber is not a danger to the water table and is not a fire hazard if covered with earth and replanted. About 10 per cent of the tires that were at the site will be used in the berm. Some will form the berm while others will be chipped and used to spread around the lot. About 45cm of earth will be added to cover the chipped tires and then the site will then be planted. Stewardship BC will pay about $50,000 for the project while the province will pay about $25,000 once all the work is done. It was a good partnership all the way around,” said Mana. The project is expected to be complete in late spring when Mana says the land will be in useful condition again.

RCMP responds to complaint of fundraising in coastal nations By Denise Titian Ha-Shilth-Sa Reporter The chief councillor of the Ahousaht First Nation is questioning the authority of a provincial gaming officer who has complained to RCMP that lotteries that have not been sanctioned by B.C. are taking place in First Nations communities. The Tofino RCMP responded to a Jan. 7 complaint from a gaming officer who reported he had information that &quot;there were several ongoing illegal lotteries or raffles going on in Ahousaht and possibly the West Coast Area as well.&quot; Chief Councillor Curtis Dick said Indian reserves fall under federal juris-

diction, so he questions the province&#39;s authority in the matter. In an email to Ha-Shilth-Sa, however, the province contends that BC’s Gaming Control Act and policies apply throughout B.C., including on reserves. If gaming investigators receive a complaint about unlicensed gaming activity on a reserve, they provide the information to the RCMP. Because reserves are federal jurisdiction, the RCMP take the lead on investigating any allegations of criminal wrongdoing, said the BC spokesperson. The province issues gaming licences to protect consumers, she said. The Gaming Policy and Enforcement Branch will liaise with First Nations bands to inform members about provincial gaming policies and procedures, the spokesperson

continued. Dick said he doesn&#39;t know what the legal limits are for gaming before one has to obtain a license. The smaller populations of families living on reserve rely on a wide variety of fundraising activities, usually to send their children to sporting events. In a press release, the RCMP say that people are reminded that lotteries and raffles are supposed to be approved by the province. RCMP listed the Web site www.pssg.gov.bc.da/gaming/ for more information. Dick said his council discussed the matter at their Jan. 24 meeting. &quot;We did discuss the gaming and our council supports our membership fundraising because it&#39;s not a substantial amount that they do fund raise,&quot; said

Dick. Council will research the gaming regulations and determine whether or not they apply to his people. &quot;But, again, it would be very sad to have this stop for those who do their best to fund raise to help, not just sports teams, education and other ways to sustain or reach their goals financially,&quot; said Dick. According to the provincial gaming Web site there are various classes of licenses. Class D licenses are for fund raising events that gross $5,000 or less in revenue. It includes gaming activities like raffles (maximum $2 per single ticket; maximum $500 per single prize), independent bingos (maximum $2 per single ticket and maximum $500 per single prize).