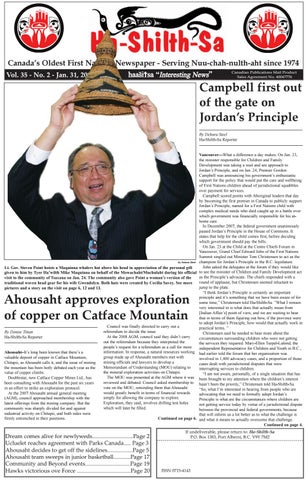 Campbell first out of the gate on Jordan’s Principle By Debora Steel Ha-Shilth-Sa Reporter Vancouver—What a difference a day makes: On Jan. 23, the minister responsible for Children and Family Development was taking a wait and see approach to Jordan’s Principle, and on Jan. 24, Premier Gordon Campbell was announcing his government’s enthusiastic support for the policy that would put the care and wellbeing of First Nations children ahead of jurisdictional squabbles over payment for services. Campbell scored points with Aboriginal leaders that day by becoming the first premier in Canada to publicly support Jordan’s Principle, named for a First Nations child with complex medical needs who died caught up in a battle over which government was financially responsible for his athome care. In December 2007, the federal government unanimously passed Jordan’s Principle in the House of Commons. It states that help for the child comes first, before deciding which government should pay the bills. On Jan. 23 at the Child at the Centre Chiefs Forum in Vancouver, Grand Chief Edward John of the First Nations Summit singled out Minister Tom Christensen to act as the champion for Jordan’s Principle in the B.C. legislature. By Debora Steel John asked the delegates at the forum if they would like Lt. Gov. Steven Point hoists a Maquinna whalers hat above his head in appreciation of the personal gift to see the minister of Children and Family Development act given to him by Tyee Ha’wilth Mike Maquinna on behalf of the Mowachaht/Muchulaht during his official as the Principle’s advocate. The chiefs responded with a visit to the community of Tsaxana on Jan. 24. The community also gave Point a woman’s version of the round of applause, but Christensen seemed reluctant to traditional woven head gear for his wife Gwendolyn. Both hats were created by Cecilia Savey. See more jump to the plate. pictures and a story on the visit on page 6, 12 and 13. “I think Jordan’s Principle is certainly an important principle and it’s something that we have been aware of for some time,” Christensen told Ha-Shilth-Sa. “What I remain very interested in is what does that actually mean from [Indian Affair’s] point of view, and we are waiting to hear that in terms of them figuring out how, if the province were to adopt Jordan’s Principle, how would that actually work in Council was finally directed to carry out a practical terms. ” referendum to decide the issue. By Denise Titian Christensen said he needed to hear more about the At the 2008 AGM, council said they didn’t carry Ha-Shilth-Sa Reporter circumstances surrounding children who were not getting out the referendum because they interpreted the the services they required. Mary-Ellen Turpel-Lafond, the people’s request for a referendum as a call for more independent Representative for Children and Youth in B.C., information. In response, a natural resources working had earlier told the forum that her organization was Ahousaht–It’s long been known that there’s a group made up of Ahousaht members met with valuable deposit of copper in Catface Mountain, involved in 1,400 advocacy cases, and a proportion of those mining officials and lawyers to develop a Chitapii, as Ahousaht calls it, and the issue of mining cases dealt with jurisdictional disputes that were Memorandum of Understanding (MOU) relating to the mountain has been hotly debated each year as the interrupting services to children. the mineral exploration activities on Chitapii. value of copper climbs. “I am not aware, personally, of a single situation that has The MOU was presented at the AGM where it was been brought to my attention where the children’s interest Doublestar, now Catface Copper Mines Ltd., has reviewed and debated. Council asked membership to hasn’t been the priority,” Christensen told Ha-Shilth-Sa. been consulting with Ahousaht for the past six years vote on the MOU, reminding them that Ahousaht in an effort to strike an exploration protocol. “So, what I’m interested in hearing from people who are would greatly benefit in terms of financial rewards At the 2007 Ahousaht annual general meeting advocating that we need to formally adopt Jordan’s simply for allowing the company to explore. (AGM), council approached membership with the Principle is what are the circumstances where children are Exploration, they said, involves drilling test holes latest offerings from the mining company. But the not getting service today by virtue of a jurisdictional dispute which will later be filled. community was sharply divided for and against between the provincial and federal governments, because industrial activity on Chitapii, and both sides were that will inform us a lot better as to what the challenge is Continued on page 6. and what it means to actually overcome that challenge. firmly entrenched in their positions. Continued on page 4.