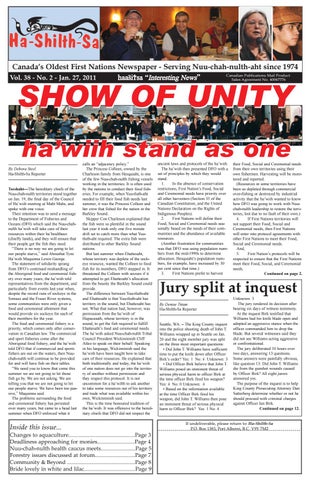 SHOW OF UNITY ha’wiih stand as one

By Debora Steel Ha-Shilth-Sa Reporter Tseshaht—The hereditary chiefs of the Nuu-chah-nulth territories stood together on Jan. 19, the final day of the Council of Ha’wiih meeting at Maht Mahs, and spoke with one voice. Their intention was to send a message to the Department of Fisheries and Oceans (DF0) which said the Nuu-chahnulth ha’wiih will take care of their resources within their ha’houlthees (chiefly lands), and they will ensure that their people get the fish they need. “There is no way we are going to let our people starve,” said Ahoushat Tyee Ha’wiih Maquinna Lewis George. The statement of solidarity sprang from DFO’s continued mishandling of the Aboriginal food and ceremonial fishery over many years, the ha’wiih told representatives from the department, and particularly from events last year when, despite the record runs of sockeye in the Somass and the Fraser River systems, some communities were only given a food and ceremonial allotment that would provide six sockeye for each of their members for the year. The food and ceremonial fishery is a priority, which comes only after conservation in Canadian law. The commercial and sport fisheries come after the Aboriginal food fishery, and the ha’wiih told DFO that if commercial and sports fishers are out on the waters, then Nuuchah-nulth will continue to be provided for and will have fish on their tables. “We need you to know that come this summer we are not going to let those fish go by. We are not asking. We are telling you that we are not going to let our people starve. We have been too passive,” Maquinna said. The problems surrounding the food and ceremonial fishery has persisted over many years, but came to a head last summer when DFO enforced what it

calls an “adjacency policy.” The Princess Colleen, owned by the Charleson family from Hesquiaht, is one of the few Nuu-chah-nulth fishing vessels working in the territories. It is often used by the nations to conduct their food fisheries. For example, when Yuu-tluth-aht needed to fill their food fish needs last summer, it was the Princess Colleen and her crew that fished for the nation in the Barkley Sound. Skipper Con Charleson explained that the fish were so plentiful in the sound last year it took only one five minute drift set to catch more than what Yuutluth-aht required. The extra fish were distributed to other Barkley Sound nations. But last summer when Ehattesaht, whose territory was deplete of the sockeye resource, wanted the Colleen to food fish for its members, DFO stepped in. It threatened the Colleen with seizure if it attempted to get Ehattesaht’s allocation from the bounty the Barkley Sound could provide. The difference between Yuu-tluth-aht and Ehattesaht is that Yuu-tluth-aht has territory in the sound, but Ehattesaht has not. What that nation had, however, was permission from the ha’wiih of Hupacasath, whose territory is in the sound, to get the fish required to fulfill Ehattesaht’s food and ceremonial needs. The ha’wiih asked Nuu-chah-nulth Tribal Council President Wickinninish Cliff Atleo to speak on their behalf. Speaking in his language, Wickinninish said the ha’wiih have been taught how to take care of their resources. He explained that both traditionally and today, the ha’wiih of one nation does not go into the territory of another without permission and they respect this protocol. It is not uncommon for a ha’wilth to ask another to take some resources out of his territory and trade what was available within his own, Wickinninish said. This is the time honoured tradition of the ha’wiih. It was offensive to the hereditary chiefs that DFO did not respect the

ancient laws and protocols of the ha’wiih. The ha’wiih then presented DFO with a set of principles by which they would stand. 1. In the absence of conservation restrictions, First Nation’s Food, Social and Ceremonial needs have priority over all other harvesters (Section 35 of the Canadian Constitution, and the United Nations Declaration on the Rights of Indigenous Peoples). 2. First Nations will define their Food, Social and Ceremonial needs seasonally based on the needs of their communities and the abundance of available resources. (Another frustration for communities was that DFO was using population numbers from the mid-1990s to determine allocation. Hesquiaht’s population numbers, for example, have increased by 30 per cent since that time.) 3. First Nations prefer to harvest

Unknown: 3 The jury rendered its decision after hearing six days of witness testimony. At the inquest Birk testified that Williams had his knife blade open and adopted an aggressive stance when the officer commanded him to drop the blade. But several witnesses said they did not see Williams acting aggressive or confrontational. The jury deliberated 10 hours over two days, answering 13 questions. Some answers were painfully obvious, like question 13: Did John T. Williams die from the gunshot wounds caused by Officer Birk? All eight jurors answered yes. The purpose of the inquest is to help King County Prosecuting Attorney Dan Satterberg determine whether or not he should proceed with criminal charges against Officer Ian Birk. Continued on page 12.