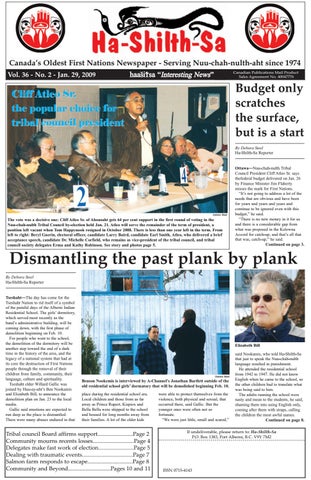 Budget only scratches the surface, but is a start

The vote was a decisive one: Cliff Atleo Sr. of Ahousaht gets 64 per cent support in the first round of voting in the Nuu-chah-nulth Tribal Council by-election held Jan. 21. Atleo will serve the remainder of the term of president, a position left vacant when Tom Happynook resigned in October 2008. There is less than one year left in the term. From left to right: Beryl Guerin, electoral officer, candidate Larry Baird, candidate Earl Smith, Atleo, who delivered a brief acceptance speech, candidate Dr. Michelle Corfield, who remains as vice-president of the tribal council, and tribal council society delegates Erma and Kathy Robinson. See story and photos page 5.

Ottawa—Nuu-chah-nulth Tribal Council President Cliff Atleo Sr. says thefederal budget delivered on Jan. 26 by Finance Minister Jim Flaherty misses the mark for First Nations. “It’s not going to address a lot of the needs that are obvious and have been for years and years and years and continue to be ignored even with this budget,” he said. “There is no new money in it for us and there is a considerable gap from what was proposed in the Kelowna Accord for catch-up, and that’s all that that was, catch-up,” he said. Continued on page 3.

Tseshaht—The day has come for the Tseshaht Nation to rid itself of a symbol of the painful days of the Alberni Indian Residential School. The girls’ dormitory, which served most recently as the band’s administrative building, will be coming down, with the first phase of demolition beginning on Feb. 10. For people who went to the school, the demolition of the dormitory will be another step toward the end of a dark time in the history of the area, and the legacy of a national system that had at its core the destruction of First Nations people through the removal of their children from family, community, their language, culture and spirituality. Tseshaht elder Willard Gallic was joined by Huu-ay-aht’s Ben Nookamis and Elizabeth Bill, to announce the demolition plan on Jan. 23 to the local media. Gallic said emotions are expected to run deep as the place is dismantled. There were many abuses endured in that

Benson Nookemis is interviewed by A-Channel’s Jonathan Bartlett outside of the old residential school girls’ dormatory that will be demolished beginning Feb. 10. place during the residential school era. Local children and those from as far away as Prince Rupert, Kispiox and Bella Bella were shipped to the school and housed for long months away from their families. A lot of the older kids

were able to protect themselves from the violence, both physical and sexual, that occurred there, said Gallic. But the younger ones were often not so fortunate. “We were just little, small and scared,”

said Nookamis, who told Ha-Shilth-Sa that just to speak the Nuu-chah-nulth language resulted in punishment. He attended the residential school from 1942 to 1947. He did not know English when he came to the school, so the other children had to translate what was being said to him. The adults running the school were nasty and mean to the students, he said, shaming them into using English only, coming after them with straps, calling the children the most awful names. Continued on page 8.