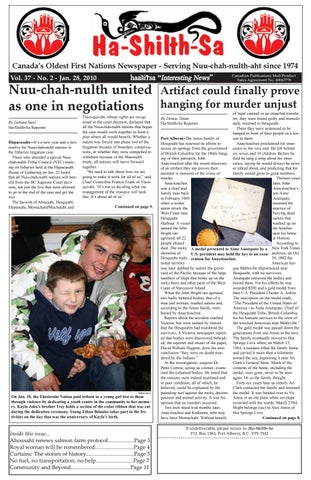 Nuu-chah-nulth united Artifact could finally prove as one in negotiations hanging for murder unjust By Debora Steel Ha-Shilth-Sa Reporter Hupacasaht—It’s a new year and a new resolve for Nuu-chah-nulth nations in the fisheries litigation case. Those who attended a special Nuuchah-nulth Tribal Council (NTC) meeting on fisheries held at the Hupacasath House of Gathering on Jan. 22 heard that all Nuu-chah-nulth nations will benefit from the BC Supreme Court decision, not just the five that were allowed to go to the end of the case and get the win. The ha-wiih of Ahousaht, Hesquiaht, Ehattesaht, Mowachaht/Muchalaht and

Tla-o-qui-aht, whose rights are recognized in the court decision, declared that all the Nuu-chah-nulth nations that began the case would work together to form a plan where all would benefit. Whether a nation was forced into phase two of the litigation because of boundary complications, or whether they were compelled to withdraw because of the Maa-nulth treaty, all nations will move forward together. “We need to talk about how we are going to make it work for all of us,” said Chief Councillor Francis Frank of Tla-oqui-aht. “It’s not us deciding what our management of the resource will look like. It’s about all of us.” Continued on page 9.

On Jan. 18, the Ehattesaht Nation paid tribute to a young girl lost to them through violence by dedicating a youth centre in the community to her memory. Kayla John’s brother Troy holds a section of the cedar ribbon that was cut during the dedication ceremony. Young Ethan Belanko takes part in the festivities on the day that was the anniversary of Kayla’s birth.

of legal counsel or an impartial translator, they were found guilty and immediately returned to Hesquiaht. There they were sentenced to be hanged in front of their people as a lesPort Alberni–The Amos family of son to them. Hesquiaht has renewed its efforts to Anayitzachist proclaimed his innosecure an apology from the government cence to the very end. He left behind of British Columbia for the 1860s hang- six wives and 10 children. Before he ing of their patriarch, John died he sang a song about his innoAnayitzachist after the recent discovery cence, saying he would always be news of an artifact they say proves their or talked about, and predicting that his ancestor is innocent of the crime of family would grow to great numbers. murder. Thirteen years Anayitzachist later, John was a chief and Anayitzachist’s family man back son Aime in February 1869 Anutspato when a winter resumed the storm struck the practice of West Coast near burying dead Hesquiaht sailors that Harbour. A vessel washed up on named the John the beaches Bright ran near his home aground; all 22 at Homiss. people aboard According to died. The rocky A medal presented to Aime Anutspato by a New York Times shoreline of U.S. president may hold the key to an exon- archives, on Oct. Hesquiaht tradi- eration for Anayitzachist. 10, 1882 the tional territory American barwas later dubbed by sailors the graveque Malleville shipwrecked near yard of the Pacific because of the large Hesquiaht, with no survivors. numbers of ships that broke up on the Anutspato retrieved the bodies and rocks there and other parts of the West buried them. For his efforts he was Coast of Vancouver Island. awarded $200 and a gold medal from When the John Bright ran aground, then U.S. President Chester A. Arthur. two badly battered bodies, that of a The inscription on the medal reads, man and woman, washed ashore and, “The President of the United States of according to the Amos family, were America - to Aime Anutspato, Chief of buried by Anayitzachist. the Hesquiaht Tribe, British Columbia, Reports about the accident reached for his humane services to the crew of Victoria, but were tainted by rumors the wrecked American ship Malleville.” that the Hesquiahts had murdered the The gold medal was passed down the survivors. A Victoria newspaper report- generations from one Amos to the next. ed that bodies were discovered behead- The family eventually moved to Hot ed; the reporter and owner of the paper, Springs Cove when, on March 27, David William Higgins, drew his own 1964, a tsunami lifted the family home conclusion “they were no doubt murand carried it more than a kilometer dered by the Indians.” toward the sea, depositing it near Art At the investigation, surgeon Dr. Clark’s General Store. Much of the Peter Comrie, acting as coroner, examcontents of the home, including the ined the exhumed bodies. He noted that medal, were gone, never to be seen the remains were indeed mutilated and again. Or so the family thought. in poor condition, all of which, he Forty-six years later an elderly Art believed, could be explained by the Clark contacted the family and returned pounding surf against the rocks, decom- the medal. It was handed over to Vic position and animal activity. It was his Amos in an old plain white envelope opinion that no murders occurred. scrawled with the words: March 2?/64 Two men stood trial months later, Might belonge (sic) to Alex Amos of Anayitzachist and Katkeena, who may Hot Springs Cove. have been Mowachaht. Without benefit Continued on page 8. By Denise Titian Ha-Shilth-Sa Reporter