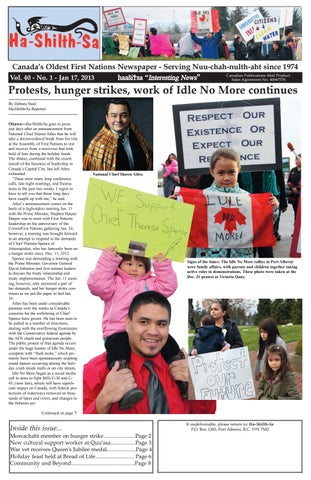 Protests, hunger strikes, work of Idle No More continues By Debora Steel Ha-Shilth-Sa Reporter Ottawa—Ha-Shilth-Sa goes to press just days after an announcement from National Chief Shawn Atleo that he will take a doctor-ordered break from his role at the Assembly of First Nations to rest and recover from a norovirus that took hold of him during the holiday break. The illness, combined with the recent tumult of the business of leadership in Canada’s Capital City, has left Atleo exhausted. “There were many long conference calls, late night meetings, and frustrations in the past two weeks. I regret to have to tell you that those long days have caught up with me,” he said. Atleo’s announcement comes on the heels of a high-stakes meeting Jan. 11 with the Prime Minister, Stephen Harper. Harper was to meet with First Nations leadership on the anniversary of the Crown/First Nations gathering Jan. 24, however, a meeting was brought forward in an attempt to respond to the demands of Chief Theresa Spence of Attawapiskat, who has famously been on a hunger strike since. Dec. 11, 2012. Spence was demanding a meeting with the Prime Minister, Governor General David Johnston and first nations leaders to discuss the treaty relationship and treaty implementation. The Jan. 11 meeting, however, only answered a part of her demands, and her hunger strike continues as we put the paper to bed Jan. 16. Atleo has been under considerable pressure over the weeks as Canada’s concerns for the well-being of Chief Spence have grown. He has been seen to be pulled in a number of directions, dealing with the overflowing frustrations with the Conservative federal agenda by the AFN chiefs and grassroots people. The public protest of that agenda occurs under the huge banner of Idle No More, complete with “flash mobs,” which primarily have been spontaneously erupting round dances occurring among the holiday crush inside malls or on city streets. Idle No More began as a social media call to arms to fight Bills C-38 and C45, (now law), which will have significant impact on Canada, with federal protections of waterways removed on thousands of lakes and rivers, and changes to the fisheries act.

Signs of the times: The Idle No More rallies in Port Alberni were family affairs, with parents and children together taking active roles in demonstrations. These photo were taken at the Dec. 31 protest at Victoria Quay.