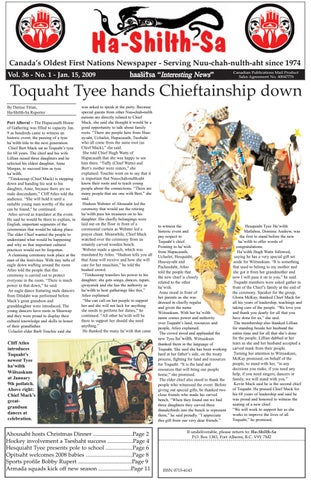 Toquaht Tyee hands Chieftainship down By Denise Titian, Ha-Shilth-Sa Reporter Port Alberni – The Hupacasath House of Gathering was filled to capacity Jan. 9 as hundreds came to witness an historic event; the passing of a tyee ha’wilth title to the next generation. Chief Bert Mack sat as Toquaht’s tyee for 68 years. The chief and his wife Lillian raised three daughters and he selected his eldest daughter, Anne Morgan, to succeed him as tyee ha’wilth. “Tiitskeesup (Chief Mack) is stepping down and handing his seat to his daughter, Anne, because there are no male descendants,” Cliff Atleo told the audience. “She will hold it until a suitable young man worthy of the seat can be found,” he continued. Atleo served as translator at the event. He said he would be there to explain, in English, important segments of the ceremonies that would be taking place. The elder Chief wanted the people to understand what would be happening and why so that important cultural practices would not be forgotten. A cleansing ceremony took place at the start of the festivities. With tiny tufts of eagle down wafting around the room Atleo told the people that this ceremony is carried out to protect everyone in the room. “There is much power in that down,” he said. An eagle dance featuring male dancers from Ditidaht was performed before Mack’s great grandson and granddaughter were introduced. The young dancers have roots in Shuswap and they were proud to display their cultural knowledge and skills in honor of their grandfather. Ucluelet elder Barb Touchie said she

was asked to speak at the party. Because special guests from other Nuu-chah-nulth nations are directly related to Chief Mack, she said she thought it would be a good opportunity to talk about family roots. “There are people here from Huuay-aht, Ucluelet, Hupacasath, Tseshaht who all come from the same root (as Chief Mack),” she said. She told Chief Hugh Watts of Hupacasath that she was happy to see him there. “Tuffy (Chief Watts) and Bert’s mother were sisters,” she explained. Touchie went on to say that it is important that Nuu-chah-nulth-aht know their roots and to teach young people about the connections. “There are many people that are one with Bert,” she said. Hudson Webster of Ahousaht led the ceremony that would see the retiring ha’wilth pass his treasures on to his daughter. His chiefly belongings were laid out on the floor in front of a ceremonial curtain as Webster led a prayer chant. Meanwhile, Chief Mack watched over the ceremony from an ornately carved wooden bench. Webster made a speech, which was translated by Atleo. “Hudson tells you all that Anne will receive and how she will care for her muschim,” he told the hushed crowd. “Tiitskeesup transfers his power to his daughter; she gets songs, dances, tupati, qwayatsik and she has the authority as ha’wilth to host gatherings like this,” Atleo explained. “She can call on her people to support her and she will not lack for anything she needs to perform her duties,” he continued. “All other ha’wiih will be there to support her should she need anything.” He thanked the many ha’wiih that came

to witness the historic event and pay respect to Toquaht’s chief. Pointing to ha’wiih from Hupacasath, Ucluelet, Hesquiaht, Huu-ay-aht and Pacheedaht, Atleo told the people that the new chief is closely related to the other ha’wiih. Anne stood in front of her parents as she was dressed in chiefly regalia and given the name Wiitsaskum. With her ha’wilth name comes power and authority over Toquaht’s land, resources and people, Atleo explained. The crowd stood and applauded the new Tyee ha’wilth. Wiitsaskum thanked them in the language of Toquaht. She said she has been working hard at her father’s side, on the treaty process, fighting for land and resources for Toquaht. “It is the land and resources that will bring our people home,” she promised. The elder chief also stood to thank the people who witnessed the event. Before giving out special gifts, he thanked two close friends who made his carved bench. “When they found out we had three daughters they carved three thunderbirds into the bench to represent them,” he said proudly. “I appreciate this gift from our very dear friends.”

Hesquiaht Tyee Ha’wilth Matlahoa, Dominic Andrew, was the first to stand before the new ha’wilth to offer words of congratulations. Ha’wilth Hugh Watts followed, saying he has a very special gift set aside for Wiitsaskum. “It is something that used to belong to my mother and she got it from her grandmother and now I will pass it on to you,” he said. Toquaht members were asked gather in front of the Chief’s family at the end of the ceremony. Speaker for the group, Gloria McKay, thanked Chief Mack for all his years of leadership, teachings and taking care of the people. “We love you and thank you dearly for all that you have done for us,” she said. The membership also thanked Lillian for standing beside her husband the entire time and for all that she’s done for the people. Lillian dabbed at her tears as she and her husband accepted a carved mask from their people. Turning her attention to Wiitsaskum, McKay promised, on behalf of the people, to stand with her, “in any decisions you make, if you need any help, if you need singers, dancers or family, we will stand with you.” Kevin Mack said he is the second chief of Toquaht. He praised Chief Mack for his 68 years of leadership and said he was proud and honored to witness the seating of a new chief. “We will work to support her as she works to improve the lives of all Toquaht,” he promised.