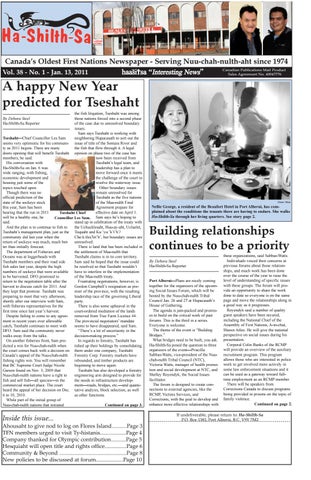 A happy New Year predicted for Tseshaht the fish litigation, Tseshaht was among those nations forced into a second phase of the case due to unresolved boundary issues. Sam says Tseshaht is working with Tseshaht—Chief Councillor Les Sam neighboring Hupacasath to sort out the seems very optimistic for his communi- issue of title of the Somass River and ty as 2011 begins. There are many the fish that flow through it. A legal doors opening that will benefit Tseshaht opinion on phase two of the case has members, he said. now been received from His conversation with Tseshaht’s legal team, and Ha-Shilth-Sa on Jan. 6 was leadership has a plan to wide ranging, with fishing, move forward once it meets economic development and the challenge of the court to housing just some of the resolve the waterway issue. topics touched upon. Other boundary issues Though there was no remain unresolved for official prediction of the Tseshaht as the five nations state of the sockeye stock of the Maa-nulth Final this year, Sam has been Agreement prepare for hearing that the run in 2011 effective date on April 1. Tseshaht Chief will be a healthy one, he Councillor Les Sam. Sam says he’s hoping to said. stand up in celebration of the treaty with And the plan is to continue to fish to the Uchucklesaht, Huu-ay-aht, Ucluelet, Tseshaht’s management plan, just as the Toquaht and Ka:’yu:’k’t’h’/ community did last year when the Che:k:tles7et’h’, but boundary issues are return of sockeye was much, much betunresolved. ter than initially forecast. There is land that has been included in The department of Fisheries and the settlement of Maa-nulth that Oceans was at loggerheads with Tseshaht claims is in its core territory. Tseshaht members and their road side Sam said he hoped that the issue could fish sales last year, despite the high be resolved so that Tseshaht wouldn’t numbers of sockeye that were available have to interfere in the implementation to be harvested. DFO promised to of the Maa-nulth treaty. return to the negotiation table after the Frustrating negotiations, however, is harvest to discuss catch for 2011. And Gordon Campbell’s resignation as prethey kept that promise. Tseshaht was mier of the province, with the resulting preparing to meet that very afternoon, leadership race of the governing Liberal shortly after our interview with Sam, party. with fisheries representatives for the There is also some upheaval in the first time since last year’s harvest. court-ordered mediation of the lands Despite failing to come to any agreeremoved from Tree Farm Licence 44. ment in recent years over allowable The provincial negotiators’ mandate catch, Tseshaht continues to meet with seems to have disappeared, said Sam. DFO. Sam said the community never “There’s a lot of uncertainty in the walks away from the talks. decision-making process.” On another fisheries front, Sam preIn regards to forestry, Tseshaht has dicted a win for Nuu-chah-nulth when tidied up their holdings by consolidating the court comes back with a decision on them under one company, Tseshaht Canada’s appeal of the Nuu-chah-nulth Forestry Corp. Forestry markets have fishing rights win. You will remember rebounded, and timber products are that BC Supreme Court Judge Nicole beginning to move again. Garson found on Nov. 3, 2009 that Tseshaht has also developed a forestry Nuu-chah-nulth nations have a right to engineering arm designed to provide for fish and sell fish—all species—in the the needs in infrastructure developcommercial market place. The court ment—roads, bridges, etc.—and quantiheard the appeal of her decision on Dec. tative analysis, block selection, as well 6 to 10, 2010. as other functions. While part of the initial group of Nuu-chah-nulth nations that initiated Continued on page 3. By Debora Steel Ha-Shilth-Sa Reporter

Nellie George, a resident of the Beaufort Hotel in Port Alberni, has complained about the conditions the tenants there are having to endure. She walks Ha-Shilth-Sa through her living quarters. See story page 2.

Building relationships continues to be a priority By Debora Steel Ha-Shilth-Sa Reporter Port Alberni—Plans are nicely coming together for the organizers of the upcoming Social Issues Forum, which will be hosted by the Nuu-chah-nulth Tribal Council Jan. 26 and 27 at Hupacasath’s House of Gathering. The agenda is jam-packed and promises to build on the critical work of past forums. This is the third in a series. Everyone is welcome. The theme of the event is “Building Bridges.” What bridges need to be built, you ask. Ha-Shilth-Sa posed the question to three organizers of the event—Priscilla Sabbas-Watts, vice-president of the Nuuchah-nulth Tribal Council (NTC), Victoria Watts, manager of health promotion and social development at NTC, and Shelley Royendyk, the Social Issues facilitator. The forum is designed to create connections to external agencies, like the RCMP, Victims Services, and Corrections, with the goal to develop and enhance more effective relationships with

these organizations, said Sabbas-Watts. Individuals voiced their concerns at previous forums about those relationships, and much work has been done over the course of the year to raise the level of understanding of specific issues with these groups. The forum will provide an opportunity to share the work done to date so everyone is on the same page and move the relationships along in a good way as it progresses. Royendyk said a number of quality guest speakers have been secured, including the National Chief of the Assembly of First Nations, A-in-chut, Shawn Atleo. He will give the national perspective on social issues during his presentation. Corporal Colin Banks of the RCMP will provide an overview of the auxiliary recruitment program. This program allows those who are interested in police work to get involved more actively in some law enforcement situations and it can be used as a gateway toward fulltime employment as an RCMP member. There will be speakers from Corrections Canada to discuss programs being provided in prisons on the topic of family violence. Continued on page 2.