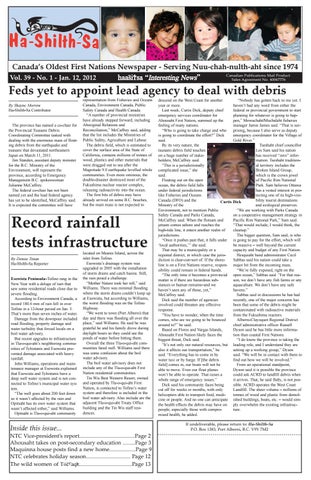 Feds yet to appoint lead agency to deal with debris By Shayne Morrow Ha-Shilth-Sa Contributor The province has named a co-chair for the Provincial Tsunami Debris Coordinating Committee tasked with dealing with the enormous mass of floating debris from the earthquake and tsunami that devastated northeastern Japan on March 11, 2011. Jim Standen, assistant deputy minister for the B.C. Ministry of the Environment, will represent the province, according to Emergency Management B.C. spokeswoman Julianne McCaffrey. The federal co-chair has not been named yet and the lead federal agency has yet to be identified, McCaffrey said. It is expected the committee will have

representation from Fisheries and Oceans Canada, Environment Canada, Public Safety Canada and Health Canada. “A number of provincial ministries have already stepped forward, including Aboriginal Relations and Reconciliation,” McCaffrey said, adding that the list includes the Ministries of Public Safety, Agriculture and Labour. The debris field, which is estimated to cover the surface area of the State of California, contains millions of tonnes of wood, plastics and other materials that were dragged out to sea after the Magnitude 9.0 earthquake levelled whole communities. Even more ominous, the double-disaster destroyed most of the Fukushima nuclear reactor complex, releasing radioactivity into the ocean. The first bits of debris may have already arrived on some B.C. beaches, but the main mass is not expected to

Record rainfall tests infrastructure By Denise Titian Ha-Shilth-Sa Reporter Esowista Peninsula–Tofino rang in the New Year with a deluge of rain that saw some residential roads close due to severe flooding. According to Environment Canada, a record 180.6 mm of rain fell in over Tofino in a 12-hour period on Jan. 3. That’s more than seven inches of water. Damage from the downpour included road flooding, property damage and water turbidity that forced locals on a boil water advisory. But recent upgrades to infrastructure in Tla-o-qui-aht’s neighboring communities of Tyhistanis and Esowista prevented damage associated with heavy rainfall. John Williams, operations and maintenance manager at Esowista explained that Esowista and Tyhistanis have a deep well water system and is not connected to Tofino’s municipal water system. “The well goes about 200 feet down so it wasn’t affected by the rain and Opitsaht has its own water system that wasn’t affected either,” said Williams. Opitsaht is Tla-o-qui-aht community

located on Meares Island, across the inlet from Tofino. Esowista’s drainage system was upgraded in 2005 with the installation of storm drains and catch basins. Still, the rain posed a challenge. “Mother Nature took her toll,” said Williams. There was minimal flooding where the storm drains couldn’t keep up at Esowista, but according to Williams, the worst flooding was on the Tofino Highway. “We went to town (Port Alberni) that day and there was flooding all over the place,” said Williams. He said he was grateful he and his family drove during daylight hours so they could see the ponds of water before hitting them. Overall the three Tla-o-qui-aht communities fared well. Williams said there was some confusion about the boil water advisory. The boil water advisory does not include any of the Tla-o-qui-aht First Nation residential communities. Tin Wis Best Western Resort, owned and operated by Tla-o-qui-aht First Nation, is connected to Tofino’s water system and therefore is included in the boil water advisory. Also include are the adjacent Tla-o-qui-aht Treaty Office building and the Tin Wis staff residences.

descend on the West Coast for another “Nobody has gotten back to me yet. I year or more. haven’t had any word from either the Last week, Curtis Dick, deputy chief federal or provincial government to start emergency services coordinator for planning for whatever is going to hapAhousaht First Nation, summed up the pen,” Mowachaht/Muchalaht fisheries feeling of many nations. manager Jamie James said. “That is sur“Who is going to take charge and who prising, because I also serve as deputy is going to coordinate the effort?” Dick emergency coordinator for the Village of said. Gold River.” By its very nature, the Tseshaht chief councillor tsunami debris field touches Les Sam said his nation on a huge number of stakehas received “zero” inforholders, McCaffrey said. mation. Tseshaht tradition“This is a jurisdictionally al territory includes the complicated issue,” she Broken Island Group, said. which is the crown jewel Floating out on the open of Pacific Rim National ocean, the debris field falls Park. Sam believes Ottawa under federal jurisdictions has a vested interest in prolike Fisheries and Oceans tecting one of its high-visiCanada (DFO) and the bility tourist destinations Curtis Dick Ministry of the and ecological preserves. Environment, not to mention Public “We are working with Parks Canada Safety Canada and Parks Canada, on a cooperative management strategy in McCaffrey said. When the flotsam and Pacific Rim National Park,” Sam said. jetsam comes ashore and reaches the “That would include, I would think, the high-tide line, it enters another realm of cleanup.” jurisdictions. The bigger question, Sam said, is who “Once it pushes past that, it falls under is going to pay for the effort, which will ‘local authorities,’” she said. be massive – well beyond the current That may be a municipality or a capacity and budget of any First Nation. regional district, in which case the jurisHesquiaht band administrator Cecil diction is clear-cut–sort of. If the shoreSabbas said his nation could take a line is on a First Nations reserve, respon- major hit from the incoming mass. sibility could remain in federal hands. “We’re fully exposed, right on the “The only time it becomes a provincial open ocean,” Sabbas said. “For that reamatter is if there are hazardous subson, we don’t have any fish farms or any stances or human remains–and we aquaculture. We don’t have any safe haven’t seen any of those, yet,” havens.” McCaffrey said. Sabbas said in discussions he has had Dick said the number of agencies recently, one of the major concerns has involved could threaten any effective been that some of the debris might be response. contaminated with radioactive materials “You have to wonder, when the time from the Fukushima reactors. comes, who are we going to be bounced Alberni-Clayoquot Regional District around to?” he said. chief administrative officer Russell Based on Flores and Vargas Islands, Dyson said he has little more informaAhousaht First Nation likely faces the tion than coastal First Nations. biggest threat, Dick said. “I do know the province is taking the “It’s not only our natural resources, but leading role, and I understand they are also it affects our transportation,” he setting up a working group,” Dyson said. “Everything has to come in by said. “We will be in contact with them to water taxi or by barge. If [the debris find out how we will be involved.” field] comes in, our boats will not be From an operational standpoint, able to move. Even our float planes Dyson said it is possible the province won’t be able to operate. That raises a could ask ACRD to landfill debris when whole range of emergency issues.” it arrives. That, he said flatly, is not posDick said his community faces being sible. ACRD operates the West Coast cut off for weeks or months, with only Landfill. The sheer volume – millions of helicopters able to transport food, meditonnes of wood and plastic from demolcine or people. And no one can anticipate ished buildings, boats, etc. – would simthe health effects the debris may have on ply overwhelm the existing infrastrucpeople, especially those with comproture. mised health, he added. If undeliverable, please return to: Ha-Shilth-Sa P.O. Box 1383, Port Alberni, B.C. V9Y 7M2