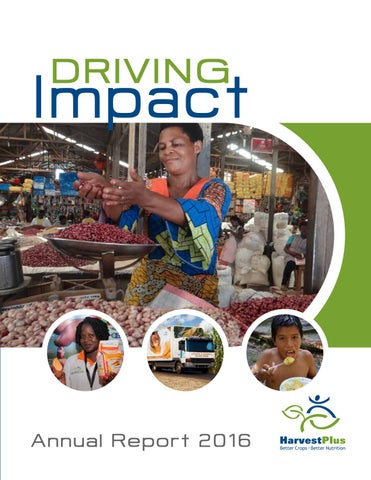 HarvestPlus is developing and promoting biofortified staple crops to improve human health and nutrition, and providing global leadership on biofortification evidence and technology. Hidden Hunger More than two billion people in the world—roughly one person in three—do not get enough essential vitamins and minerals, such as vitamin A, zinc, and iron, in their daily diets. Their condition is known as “hidden hunger” because those suffering from this type of undernutrition often appear healthy, but are actually more vulnerable to illness and infections. The impact of vitamin and mineral deficiencies is as follows: IRON DEFICIENCY • Impairs mental development and learning capacity • Increases weakness and fatigue • May increase risk of women dying in childbirth VITAMIN A DEFICIENCY • Impairs growth • Causes eye damage leading to blindness • Increases risk of infection such as diarrheal disease ZINC DEFICIENCY • Contributes to stunting • Lowers immunity • Increases risk of diarrheal disease and respiratory infection

Biofortification Biofortification is the process of increasing the density of vitamins and minerals in a crop, through plant breeding or agronomic practices, so that when consumed regularly will generate measurable improvement in nutritional status.

Dear Friends, 2016 was a truly impactful year for biofortification. Thanks to the extraordinary efforts of our partners, we reached more than 25 million people with nutritious biofortified crops. Our founder and ambassadorat-large Howarth “Howdy” Bouis won the World Food Prize for his pioneering work in biofortification. Peer-reviewed studies continued to validate the nutritional and health impact of biofortified crops. And accolades from influential actors solidified the growing momentum behind our program, including TIME magazine’s listing of vitamin A-enriched orange sweet potato as one of the 25 best inventions of the year. Since joining this visionary and dynamic team as CEO, I have been constantly amazed and inspired by the energies and passions of those involved. From Bangladesh to Zambia, our staff and partners are driving real impact by working innovatively and industriously to deliver immeasurable health benefits to rural households who rely on staple crops for their daily nutrition. Last year’s successes strengthen our resolve to reach a billion people with biofortified foods by 2030 as part of our contribution to achieve Zero Hunger. Many challenges lie ahead, but our achievements to date and a new strategic plan give me confidence that we can take biofortification to scale, ensuring that hundreds of millions of people can benefit from this simple but vital technology. We cannot do this alone. I am particularly grateful to our donors and partners for their unwavering faith in our mission to enrich the world through better crops and nutrition. Together, we can end the global scourge of hidden hunger.

Our work contributes to the following Sustainable Development Goals.

public and private sectors to develop and deliver biofortified crops, educate farmers and consumers on the benefits of these foods, and build inclusive, sustainable markets.

messaging and products at the first Nutritious Food Fair

biofortified crops in Latin America and the Caribbean

reached with vitamin A cassava messaging through promotional events

8 of 10 provinces growing experienced the 1,200 students benefits of biofortified maize

through a competition to get ORANGE schools growing and eating MAIZE

on investment 3,300+ trained opportunities in the

Nearly farmers and partners trained on

10,000+ people reached with key messages on biofortified crops through 5 agricultural and trade exhibitions

RESEARCH &amp; PROGRAMS Our impact is underpinned by ... The continuous work of our crop development specialists and CGIAR partners enabled governments to release

and the world-class expertise of our researchers and specialists. We bank on the knowledge and skills of our crop development, nutrition, impact, advocacy, marketing, and communications experts. An independent assessment of the evidence on biofortification’s

effectiveness resulted in a in the venerable

farmers are willing to grow that

zinc, such as provided

and that adopters increased the proportion of their beangrowing land area to iron bean varieties over time. Iron beans

constituted up to among smallholder bean farmers, and growers used up to 80% of their iron bean harvests for home consumption.

among the same women.

An efficacy study in rural Zambia revealed that consumption of

protocol for reviewing the evidence on biofortification. its

SELECTED WORKING PAPERS An Assessment of the Vitamin A Maize Seed Delivery Efforts to Date: Agro-dealer Sales and Farmer Production in Zambia

An impact assessment in Rwanda confirmed

Breakthrough findings on zinc biomarkers showed that a modest increase in

We collaborated with more than

Demand-Pull Creation, Public Officer’s Endorsement, and Consumer Willingness-to-Pay for Nutritious Iron Beans in Rural and Urban Rwanda Assessing the Adoption of Improved Bean Varieties in Rwanda and the Role of Varietal Attributes in Adoption Decisions Understanding the Adoption of High-Iron Varieties in Maharashtra, India: What Explains Popularity? A Technical Review of Modern Cassava Technology Adoption in Nigeria (1985–2013): Trends, Challenges, and Opportunities

We launched our bold, colorful, and dynamic new website

www.harvestplus.org containing a wealth of resources available free of charge.

(In thousand US dollars)

In 2016, we registered nearly 400 hits in the media, including in the most popular and influential news outlets globally. Our experts showcased biofortification at more than 30 major conferences and events.

HarvestPlus improves nutrition and public health by developing and promoting biofortified food crops that are rich in vitamins and minerals, and providing global leadership on biofortification evidence and technology. HarvestPlus is part of the CGIAR Research Program on Agriculture for Nutrition and Health (A4NH). CGIAR is a global agriculture research partnership for a food secure future. Its science is carried out by its 15 research centers in collaboration with hundreds of partner organizations. The HarvestPlus program is coordinated by two of these centers, the International Center for Tropical Agriculture (CIAT) and the International Food Policy Research Institute (IFPRI).