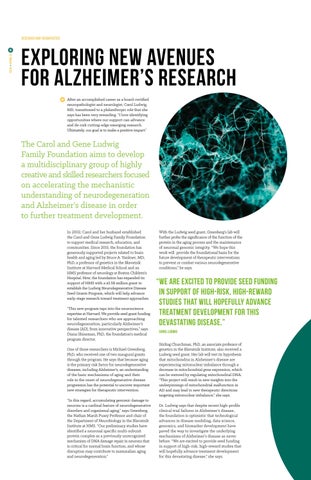 Exploring new avenues for Alzheimer’s research After an accomplished career as a board-certified neuropathologist and neurologist, Carol Ludwig, MD, transitioned to a philanthropic role that she says has been very rewarding. “I love identifying opportunities where our support can advance and de-risk cutting-edge emerging research. Ultimately, our goal is to make a positive impact.”

The Carol and Gene Ludwig Family Foundation aims to develop a multidisciplinary group of highly creative and skilled researchers focused on accelerating the mechanistic understanding of neurodegeneration and Alzheimer’s disease in order to further treatment development. In 2002, Carol and her husband established the Carol and Gene Ludwig Family Foundation to support medical research, education, and communities. Since 2015, the foundation has generously supported projects related to brain health and aging led by Bruce A. Yankner, MD, PhD, a professor of genetics in the Blavatnik Institute at Harvard Medical School and an HMS professor of neurology at Boston Children’s Hospital. Now, the foundation has expanded its support of HMS with a $2.58 million grant to establish the Ludwig Neurodegenerative Disease Seed Grants Program, which will help advance early-stage research toward treatment approaches. “This new program taps into the neuroscience expertise at Harvard. We provide seed grant funding for talented researchers who are approaching neurodegeneration, particularly Alzheimer’s disease (AD), from innovative perspectives,” says Diana Shineman, PhD, the foundation’s medical program director. One of those researchers is Michael Greenberg, PhD, who received one of two inaugural grants through the program. He says that because aging is the primary risk factor for neurodegenerative diseases, including Alzheimer’s, an understanding of the basic mechanisms of aging and their role in the onset of neurodegenerative disease progression has the potential to uncover important new strategies for therapeutic intervention. “In this regard, accumulating genomic damage to neurons is a cardinal feature of neurodegenerative disorders and organismal aging,” says Greenberg, the Nathan Marsh Pusey Professor and chair of the Department of Neurobiology in the Blavatnik Institute at HMS. “Our preliminary studies have identified a neuronal specific multi-subunit protein complex as a previously unrecognized mechanism of DNA damage repair in neurons that is critical for normal brain function, and whose disruption may contribute to mammalian aging and neurodegeneration.”

With the Ludwig seed grant, Greenberg’s lab will further probe the significance of the function of the protein in the aging process and the maintenance of neuronal genomic integrity. “We hope this work will provide the foundational basis for the future development of therapeutic interventions to prevent or combat various neurodegenerative conditions,” he says.

“We are excited to provide seed funding in support of high-risk, high-reward studies that will hopefully advance treatment development for this devastating disease.” CAROL LUDWIG

Stirling Churchman, PhD, an associate professor of genetics in the Blavatnik Institute, also received a Ludwig seed grant. Her lab will test its hypothesis that mitochondria in Alzheimer’s disease are experiencing mitonuclear imbalance through a decrease in mitochondrial gene expression, which can be restored by regulating mitochondrial DNA. “This project will result in new insights into the underpinnings of mitochondrial malfunction in AD and may lead to new therapeutic directions targeting mitonuclear imbalance,” she says. Dr. Ludwig says that despite recent high-profile clinical trial failures in Alzheimer’s disease, the foundation is optimistic that technological advances in disease modeling, data science, genomics, and biomarker development have paved the way to investigate the underlying mechanisms of Alzheimer’s disease as never before. “We are excited to provide seed funding in support of high-risk, high-reward studies that will hopefully advance treatment development for this devastating disease,” she says.