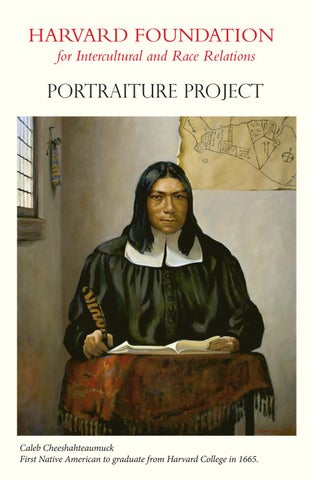 Archie C. Epps (1937-2003) Location: Room 115, 1st Floor, University Hall Unveiling Date: May 2005 Archie Calvin Epps III received a bachelor of theology degree from Harvard Divinity School in 1961. He became Assistant Dean of Students at Harvard College in 1964, and was one of Harvardâ&#x20AC;&#x2122;s first African American administrators. In 1971, Mr. Epps became the Dean of Students, and remained in the position until his retirement in 1999. Dean Archie Epps died August 21, 2003 and was buried in Mt. Auburn Cemetery, Cambridge, Massachusetts.

David L. Evans (1940 -) Location: 1st Floor Entry, Lamont Library Unveiling Date: May 2005 David L. Evans came to work in the Admissions Office in 1970. During his time in Cambridge, over fifteen times more African American undergraduates have matriculated at Harvard than in the previous 334 years. Mr. Evans has served as a proctor in Harvard Yard, an adviser to first-year students and an Assistant Dean of Freshmen. In 2002, Mr. Evans was awarded the FAS Administrative Prize, the highest honor to be conferred on an administrator by Harvardâ&#x20AC;&#x2122;s Faculty of Arts and Sciences. In 1990, Evans was given a Point of Light award by President George H.W. Bush.

Rulan Chao Pian (1922-2013) Location: 1st Floor Living Room, Cabot House, Cabot Hall Unveiling Date: May 2005 Born in Cambridge, Massachusetts, Rulan Pian received her B.A. (1944) and M.A. (1946), both in Western music history, from Radcliffe College, and a Harvard Ph.D. (1960) in East Asian Languages and in Music. From 1961, Professor Rulan Pian served Harvard University with great distinction, first as a scholar, and then as Professor of East Asian Languages and Civilizations and of Music from 1972-1992. Her academic work on the intersection of East Asian Languages and Civilizations and music generated a new discipline in the field. Professor Pian was Master of South House (now Cabot House) from 1975-1978, making her the first ethnic minority to serve as House Master for any Harvard College House.

Eileen Jackson Southern (1920 - 2002) Location: 1st Floor Dining Hall Entry, Adams House Unveiling Date: February 2007 In 1975, Eileen Jackson Southern, a scholar of Renaissance and African American music, became the first black woman to receive tenure at Harvard University. She held a joint professorship appointment in the Music Department and in the Afro-American Studies Department, which she chaired from 1976 to 1980. She retired as Professor emerita in 1987. A music scholar and teacher, Professor Southern received the 2000 Lifetime Achievement Award from the Society of American Music, the Outstanding Contributor to Music Award from the National Association of Negro Musicians, the Deems Taylor Award from ASCAP, and the Distinguished Achievement Award from the National Black Music Caucus. In 2001, she was named as a National Humanities Medalist.

Harold Amos (1918 â&#x20AC;&#x201C; 2003) Location: Warren Alpert Building, 200 Longwood Avenue, Harvard Medical School Unveiling Date: October 2007 Harold Amos, the Maude and Lillian Presley Professor of Microbiology and Molecular Genetics taught at Harvard for nearly half a century as a member of the Harvard Medical School faculty and the Faculty of Arts & Sciences. A faculty member for nearly 50 years, he was the first African American to chair a department at the Medical School, where he chaired the Department of Microbiology and Molecular Genetics twice, first from 1968 to 1971 and then from 1975 to 1978. Professor Amos was an admired mentor to hundreds of students and many present-day faculty members. He served as the first director of the Minority Medical Faculty Program of the Robert Wood Johnson Foundation. Dr. Amos was a brilliant and dedicated scholar and a compassionate professor.

Kiyo Morimoto (1918 â&#x20AC;&#x201C; 2004) Location: 1st Floor Dining Room, Dunster House Unveiling Date: February 2008 Kiyo Morimoto was a member of the Faculty of Arts and Sciences and a lecturer on education, and taught courses at the Harvard School of Public Health, the Harvard Business School, and the Harvard Graduate School of Education. Prior to coming to Harvard, Dr. Morimoto was decorated war hero of the U.S. Army in World War II. Dr. Morimoto worked for at total of 27 years at the Bureau of Study Counsel, six of which he served as director. His warm, accepting, and supportive manner helped hundreds of Harvard students adjust to college life.

John Usher Munro (1912-2002) Location: 1st-2nd Floor Stairs, Phillips Brooks House Unveiling Date: October 2008 A former dean of Harvard College, John Monro spearheaded Harvard’s efforts to open its doors to lower-income and minority students in the 1960s. He considered ethnic and economic diversity to be just as important as the College’s long history of athletic diversity. Mr. Monro wanted to affect educational opportunities in a more immediate way and on behalf of students who may never have conceived of the opportunity to attend Harvard. In 1967, Mr. Monro left Harvard to serve as a teacher and administrator at the historically black Miles College in Alabama. After 30 years at Miles, he worked at Tougaloo College, also a historically black college located in Mississippi. At the age of 80, the school’s students voted Mr. Monro as the best teacher of Tougaloo College. In 1993, he was presented the Harvard Foundation Humanitarian Award.

Stanley J. Tambiah (1929-2014) Location: Junior Common Room, Kirkland House Unveiling Date: January 2009 Stanley J. Tambiah was the Esther and Sidney Rabb Research Professor of Anthropology at Harvard University. He joined the faculty of the Harvard Anthropology Department as professor in 1976 and conducted extensive research on monastic complexes and temples in Bangkok; political violence in South Asia, and notably the Bombay riots of 1991-92; and transnational movements of people and diaspora communities in an age of “globalization.” Professor Tambiah was recognized for his many contributions to the field of social anthropology and for his incisive and erudite study of Buddhism. He also used his background as a social-anthropologist of Southeast Asia to evaluate whether the Western conceptions of magic, science, and religion are valid analytical categories for comparative studies.

Chester Middlebrook Pierce (1927-) Location: Junior Common Room, 1st Floor, Lowell House Unveiling Date: November 2010 A distinguished graduate of Harvard College in 1948 and Harvard Medical School in 1952, Chester M. Pierce served on the faculties of Harvard Medical School, Harvard Graduate School of Education, and Harvard School of Public Health. Dr. Pierce was the first African American appointed full professor at the Massachusetts General Hospital and the Harvard Department of Psychiatry. A professor of psychiatry for over 40 years, Dr. Pierce served as a consultant for the Children’s Television Network, the Peace Corps, and NASA. As an undergraduate, Dr. Pierce was an outstanding athlete at Harvard, and was the first black college football player to compete below the Mason–Dixon line. Dr. Pierce’s students revered him as a knowledgeable and caring instructor who served Harvard with exceptional dignity and professionalism.

Lester Fred Jewett (1936 - 2011) Location: Room 135, 1st Floor, Cronkhite Building, 86 Brattle Street Unveiling Date: January 2011 Over the course of his career, Lester Fred Jewett brought outstanding guidance to Harvard’s Office of Admissions and Financial Aid, where he held the roles of Director of Freshman Scholarships (1967-1972), and served as Dean of Admissions and Financial Aid (1972-1984). He became Dean of Harvard College in 1984 and served in that capacity until 1995. Mr. Jewett was known throughout his career for unflagging encouragement of minority student admissions, and for strengthening Harvard’s commitment to financial aid making tertiary education available to thousands of students. He was an enthusiastic and dedicated supporter of the Harvard Foundation.

Martin Kilson (1931-) Location: 1st-2nd Floor Stairs, Lehman Hall, Dudley House Unveiling Date: March 2012 Martin Kilson earned his PhD in political science at Harvard. Soon afterwards, he was appointed Lecturer in the Department of Government, making him the first African-American faculty member to teach at Harvard College. When he received full tenure in 1969, Professor Kilson became the first African American tenured professor at Harvard. In 1988, Professor Kilson was appointed as the Frank G. Thomson Professor of Government. He has written over one hundred journal articles and co-edited several books.

Anne-Marie Schimmel (1922 â&#x20AC;&#x201C; 2003) Location: 2nd Floor Library, Eliot House Unveiling Date: May 2013 Appointed in 1970 as Professor of Indo-Muslim Culture at Harvard, Annemarie Schimmel ranks among the earliest tenured female professors in the Faculty of Arts & Sciences. One of the truly great scholars of Islamic studies in the twentieth century, she mentored many leading scholars in the field. Her writings continue to shape the thinking of new generations of scholars. The author of over one hundred scholarly books and monographs, Professor Schimmelâ&#x20AC;&#x2122;s efforts to improve public understanding of Islam, in conjunction with her prolific scholarly work, were recognized through numerous honorary degrees from universities and prestigious awards from institutions and governments both in the West and in Muslim countries.

Rosa “Rosie” Gumataotao Rios (1965 - ) Location: Junior Common Room, 1st Floor, Winthrop House Unveiling Date: April 2015 Rosa “Rosie” Gumataotao Rios, Harvard College class of 1987, became the 43rd Treasurer of the United States after a distinguished career in economic development in both the private and public sectors. Ms. Rios is the third Hispanic woman to occupy the position of US Treasurer. As an undergraduate at Harvard, Ms. Rios was the director of Harvard’s Mexican-American dance performance group, Ballet Folklórico, an associate of the Harvard Foundation for Intercultural and Race Relations, and organized the first Cultural Rhythms Festival in 1986 with other students. In February 2015, Ms. Rios returned to Harvard as honorary host of the 30th Cultural Rhythms Festival. The portrait of Ms. Rios is the first portrait of a Latina at Harvard.

Richard Theodore Greener (1844 – 1922) Location: Annenberg Hall Unveiling Date: April 2016 Richard Theodore Greener was the first African American student to receive an AB degree from Harvard College in 1870, having won the Bowdoin Prize for elocution in both 1868 and 1870. After Harvard, Greener eventually became the first black faculty member at University of South Carolina, where he developed the Classics Department and earned a degree in law. In 1878, he was appointed Dean of the Howard University School of Law. Devoting later life to public service, Greener also served in the Foreign Service as United States Commercial Agent in Vladivostok, Russia. Scholarships are awarded in his name at Phillips Academy and the University of South Carolina.

The Harvard Foundation chose Stephen Coit ‘71 as its portrait artist after a lengthy selection process in 2003. Previously, Mr. Coit was a high tech executive, successful entrepreneur and venture capitalist before taking on a second career as a full-time portraitist in 1996. In addition to having created over twenty works for Harvard, Coit’s portraits of college presidents and other distinguished individuals are in the collections of Lesley University, Tufts University, and Saint Andrews University in Scotland. All images are reproduced with the permission of the artist, Stephen Coit ’71. All rights reserved.

The Mission of the Harvard Foundation In 1981, the president and deans of Harvard University established the Harvard Foundation for Intercultural and Race Relations with the mandate to “improve relations among racial and ethnic groups within the University and to enhance the quality of our common life.” In pursuit of this mission, the Foundation seeks to involve students of all racial, ethnic, and cultural backgrounds in the ongoing programmatic enterpr ises of the College and University and to highlight the cultural contr ibutions of all Harvard students. The Foundation sponsors annual programs and activities that are designed to promote diversity, inclusion and equity in the interest of interracial, intercultural and inter-religious understanding and har mony in the Harvard community.

A member of the Wampanoag Aquinnah tribe, Caleb Cheeshahteamuck was the first Native American to graduate from Harvard College in 1665. He attended the Harvard Indian College, which was formally chartered in 1650 for “provisions that may conduce to the education of English & Indian youth of this Country in knowledge and godliness.” Cheeshahteamuck’s portrait symbolizes Harvard College’s early intention for the education of Native Americans to play a significant role in the development of positive relations between the new colony settlers and the local indigenous communities of Massachusetts. 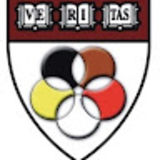